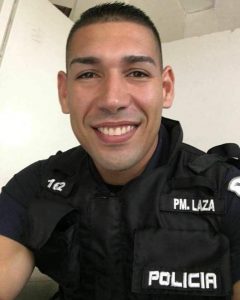 March 21, 2018 – Officer Laza-Caraballo identified himself as a police officer and attempted to intervene when several men attacked the owner of a barber shop he was visiting. Immediately after, several of the subjects entered the shop with rifles and began shooting.

Officer Laza-Caraballo was able to return fire. He killed one of the men and wounded a second before being fatally shot. The other suspects remain at large.

Officer Laza-Caraballo is survived by his two children.

Followon TwitterSubscribeto RSS Feed
Toe-Sucking Cop: No, the Prisoner Didn’t Like It