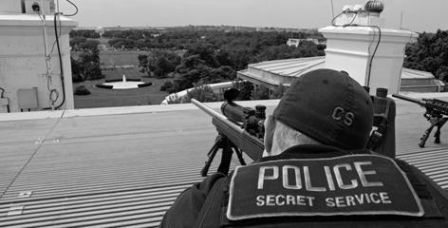 Are you on the fence about all of this deadly force stuff? Maybe you’re the person who thinks police officers should run and tackle the man who’s firing a semi-automatic at them. Or, perhaps you’d rather see officers duck and dodge bullets while trying to squirt pepper spray in the shooter’s eyes? Oh, wait. I forgot that many of you believe that pepper spray is too cruel to use on suspects (but it’s okay if the little darlings shoot at officers). Tasers are too violent. Beanbags could hurt someone (never mind that the “someone” is lobbing rocks, bottles, or bullets at the officers). Handcuffs…aww, they might leave a boo-boo on the wrists of the guy who just used an ax handle to beat his wife and kids just prior to biting quarter-sized chunk of flesh from the cheek of the officer who arrested him.

Whatever the reason and/or belief, scores of people simply don’t know or understand the laws and/or the policies regarding the use of force, specifically deadly force. So let’s attempt to put this in perspective. First of all, deadly force can be used in self defense or in the defense of others. Therefore, if a police officer perceives his/her life, or the life of another, is in immediate danger, the use of deadly force is allowable by law. The key word in all of this is “perceive,” (to become aware of through the senses, especially sight and hearing).

One officer may see a situation in an entirely different view than other officers at the scene. One may feel his life is in immediate danger while another doesn’t necessarily see the encounter in the same light. Remember, each person has a unique view of every single situation. Only YOU can see from your own eyes. So, the Monday morning quarterbacks who cry “MURDER” at the top of their lungs every time officers use deadly force, well, they absolutely have no leg to stand on, nor can they make even a half-baked guess at what happened and why it did. Why not? Because they weren’t there when the event happened, therefore, they are unable to see what happened through the eyes of the people who were there. AND, they could not—no way possible—perceive the situation in the same light as the officers and others who there at the time deadly force was used.

Sure, other police officers can rely on their own experiences to form their opinions of others in similar situations, but even they cannot say how another officer perceived the event because they cannot see through the eyes of another, nor can they experience the emotions and thoughts had by another officer.

You know, I challenge anyone to walk in a police officer’s footsteps for one month. And I dare them to reach for pepper spray or try to shoot the gun from the hand of the guy who’s sending bullets in their direction. I dare them to wait until the shooter is out of ammunition and then calmly walk over to arrest the guy who’s twice their size and hell bent on killing a cop.

As an officer for 30 days, I dare you to allow someone to use a deadly weapon against your partners and friends while you stand idly by watching the events unfold. I dare you to hear and see gunfire and then run toward it hoping and praying you can stop the shooter before he kills someone.

I dare you to have the strength to live your life after killing someone during a gunfight. I dare you.

Police work is not a game where someone can sit at home and control the action with a joystick and a few buttons and wheels. It’s about real people doing a real job that just happens to be extremely dangerous.

*One thing to remember, department use of force policies can vary from area to another. However, agencies can only make their rules tougher than the laws allow, not more relaxed.

Anyway, for those of you who took the quiz on deadly force yesterday, here are the answers. Let us know how well you did.

2. Police officers must be absolutely certain that a suspect is in possession of a dangerous weapon before they’re legally permitted to use deadly force. T or False

3. An officer has been ambushed by two drunken criminals who continue to beat and batter her with a five-foot piece of lumber (2×4). She is unable to escape and is nearing the point of unconsciousness. She’s bleeding profusely from numerous head wounds and one eye is swollen shut. Therefore, she should..

4. Officers must always attempt to use less-lethal weapons before resorting to deadly force. T or False

5. A sharpened stick could be considered as a lethal weapon. True or F

g) All of the above (each of the items listed have been used as a murder weapon).

8. An automobile could be considered as a deadly weapon? True or F

10. There are clear and defined laws that all police officers must follow when using deadly force. An officer’s perception and opinions must never be considered before pulling the trigger. T or False

Followon TwitterSubscribeto RSS Feed
How Much Do You Know About Deadly Force?