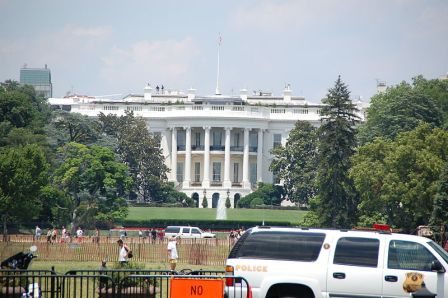 One of the leading news stories lately is about the Connecticut woman who was shot and killed by officers after she used her car to ram a barricade blocking the entrance to The White House.

Since the unfortunate incident, I’ve read countless comments about it, and there have been many made by people who actually believe the woman was murdered by the officers who fired the deadly shots. Not that the officers were doing their jobs to protect the president and others inside The White House. Not that the officers reacted appropriately to the ongoing incident. Instead, the people posting comments were crying murder and they want the police officer(s) charged and convicted of intentionally slaying the woman driver.

Of course, many of the people expressing those negative/anti-police opinions are quite often the first on the “I hate all cops and everything they stand for and do” bandwagon.

But there are others who’ve voiced what they believe are legitimate concerns, and there are those who love to Monday-morning-quarterback all actions taken by police, especially those relating to high-profile incidents. The majority of people in these two categories have absolutely no first-hand knowledge of law enforcement policies, procedures, or the laws that set standards. Many, in fact, receive some or all of their information from reading poorly researched fiction and watching fiction-based television shows.

And then there’s a good portion of the TV media (bless their ratings-hungry little hearts) who rush to report something—anything—whether it’s accurate or not, just to get the jump on other networks. And, well, it’s these inaccuracies seen on TV “news” programs that often sends some people into a foaming-at-the-mouth-let’s-blame-the-cops-no-matter-what, frenzy.

The comments I’ve read and heard in the past few days are troubling for a number of reasons. Perhaps, though, the worst of it is that many of the people demanding the officers be imprisoned for murder actually do not know the legal meaning of the word and what factors must be met to charge someone for the crime.

How many of you know the basic definition of murder? Is this what you had in mind? Murder –  the killing of one person by another who is in sound mind, with malice aforethought, intent, and with no legal excuse or authority to commit the act.

Interesting, to say the least. So, to commit the crime of murder, an individual must:

b) intend to kill the victim(s)

d) have no legal authority or excuse to kill

Now, looking back at the incident at The White House, let’s apply the definition of murder to what took place.

1) I think it’s safe to say that each of the officers involved were sane at the time of the shooting.

2) Police officers are not trained to shoot to kill. Nor are they trained to shoot to wound or to shoot out the tires of moving vehicles. Instead, they’re trained to shoot center mass of a visible target that intends to kill or cause great bodily harm. They’re also taught to continue shooting until the threat ceases to exist. In other words, if an officer is engaged in a shooting situation but can only see the bad guy’s hand, then that’s the target and the officer would aim for its center. If the bad guy decides to stop shooting and surrender, the use of deadly force must cease and the officer’s level of force must deescalate to an attempt to restrain and arrest.

So this test fails. There was no intent to kill.

3) Officers had no intent to kill the driver, nor was it their intention to cause great bodily harm. Instead, their goal was to stop the threat to them and to others.

4) The police officers involved in the D.C. shooting did indeed have the legal authority to use deadly force. This test also fails.

Therefore, the incident is lacking each of the basic requirements to meet the charge of murder.

Did you know that murder and homicide are not synonymous? That’s right, they’re not the same. You already know the definition of murder, so here’s homicide – Homicide is the killing of one human by another, but not all homicides are illegal (self defense or the defense of others, accidental killings, such as a hunting accident, etc.) A homicide that lacks criminal intent is not murder.

How much do you know about the use of deadly force? Do you know when officers are allowed to use it? Do you believe they should have the power to fire their weapons at perceived threats? Is it murder when police officers discharge their weapons, resulting in the death of a suspect, even when the death is the result of the officer(s) acting in self defense or the defense of others?

I have an idea. Let’s test your basic knowledge about deadly force and when officers are authorized to use it. Here’s how the test will work. Ten questions, all multiple choice or true or false. Easy enough, right? We’ll see.

I’ll post the answers to each of the questions on Thursday’s blog, along with facts about deadly force. Good luck.

*By the way, I’m traveling today which means I won’t be able to respond to questions until late tonight. As always, I ask that you please play nice and remember to not use profanity in your comments. We have many school children who use this site as a research tool for class projects.

This is not a forum to debate gun control!

2. Police officers must be absolutely certain that a suspect is in possession of a dangerous weapon before they’re legally permitted to use deadly force. T or F

3. An officer has been ambushed by two drunken criminals who continue to beat and batter her with a five-foot piece of lumber (2×4). She is unable to escape and is nearing the point of unconsciousness. She’s bleeding profusely from numerous head wounds and one eye is swollen shut. Therefore, she should..

4. Officers must always attempt to use less-lethal weapons before resorting to deadly force. T or F

5. A sharpened stick could be considered as a lethal weapon. T or F

g) All of the above

8. An automobile could be considered as a deadly weapon? T or F

10. There are clear and defined laws that all police officers must follow when using deadly force. An officer’s perception and opinions must never be considered before pulling the trigger. T or F

Deadly Force: It’s Not A Video Game
Scroll to top