Boston, a city rich in history, is known for events such as the Boston Tea Party, the Boston Massacre, and the Battle of Bunker Hill. The largest city in New England is also known for several firsts, such as the first public school in the country, the first college (Harvard in neighboring Cambridge), and the first subway system.

However, there’s another event in Boston history that has piqued the investigative interest of The Graveyard Shift. The event is not one of Boston’s happiest memories. It’s a true crime that, when set to page, reads like a well-plotted work of fiction. In fact, it’s a convoluted story with many characters, plot twists, and tons of suspense that would fit comfortably between the covers of a Lawrence Block novel – a real Bernie Rhodenbarr kind of story.

On March 18, 1990, the Isabella Stewart Gardner Museum was robbed of art worth $500,000,000.00. That’s half a billion dollars worth of paint, canvas, and talent that cannot be reproduced. Included in the treasured collection were paintings by Rembrandt and Manet.

The two men who supposedly broke into the museum were able to beat the elaborate security system, outfox and overpower two security guards, and take the prized artwork, all without leaving a trace. The two security guards working the graveyard shift say the robbers were dressed as Boston Police officers. According to one of the security guards known only as Richard A., the museum’s alarm system had sounded a couple times during the night. Two of the alarms were fire alarms, but there was no fire. After the alarms sounded, Richard A. went to the basement to reset the main control panel. A few minutes later, according to the alarm records, Richard A. set off a motion detector on the first floor of the museum.

Soon, at 1:24am Richard A. opened a side door to allow two men dressed as Boston police officers to enter the otherwise locked building. Opening the door to anyone was not standard procedure.

The security guards claim the two “police officers” placed them under arrest for outstanding warrants and then handcuffed them. It’s not clear if there were actually warrants on file for the two guards. If not, why were they so cooperative? Once the phony officers had the two guards handcuffed one of the intruders said, “Gentlemen, this is a robbery.”

The two guards were led to the basement, about 120 feet apart, and handcuffed to pipes. The robbers also wrapped duct tape around Richard A’s. head. Once the two guards were restrained the robbers then carried out their plan of stealing the artwork.

Neither the robbers nor the artwork have been found.

Now, the museum’s security director, Anthony Amore (Mr. Amore used to be with TSA. You may remember him from the Richard Reid “shoe bomber” case. Mr. Amore was the lead investigator on the case), has asked The Graveyard Shift and its readers for help. We hope to identify what could be a key piece of evidence in the case.

Mr. Armore and I are asking you, the readers of The Graveyard Shift, if you’d please take a look at the photo below. The image is of two keys that were found in the possession of a person of interest in the case. Do any of you know what type lock these keys fit? Have you ever seen keys like them? Perhaps they fit a storage building or locker? A public storage facility? 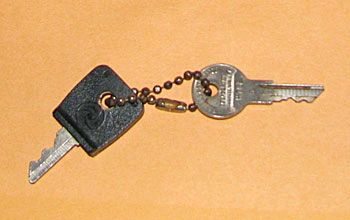 If you have any ideas or suggestions please post them in the comments section of this blog. If you’d rather remain anonymous feel free to contact me at lofland32@msn.com. I’ll forward all comments to Mr. Amore. Your help is greatly appreciated.

Do you have any knowledge of, or information about this case? Have you seen any of the missing the art? If so, please contact the Boston FBI office at 1-617-642-5533.

Persons with information regarding the Gardner Museum theft should contact the Boston F.B.I. office at 1-617-742-5533. Callers will be assured confidentiality by use of a code name. REWARD

A FIVE MILLION DOLLAR Reward is offered for the safe recovery of all stolen items in good condition. The recovery of an individual object will result in a portion of the reward, based upon the object’s market value.