A dispatcher responds in the typical monotone, “No insurance status. Plate valid.”

Did you find the communication between dispatch and patrol units 015 and 47 a bit difficult to follow? Would it help to know that a 10-28 was this particular department’s code for a request for dispatch to check the status of a vehicle license plate/registration? 10-38 = stopping a suspicious vehicle. And 10-25 was code for “meet someone in person” at a given location?

Could having this real-time knowledge help bad guys evade capture? Could it also help them commit crimes in certain areas if they knew that patrol units were in other areas? Sure it could.

And that’s the big thing these days. Criminals simply download police scanner apps to their smartphones, and with a quick touch to the screen they’re able to listen in on the activities and locations of their local men and women in blue. The same is true for PC’s, laptops, and Mac’s.

In fact, while writing this piece I located a scanner site for a nearby police department, clicked the link, and within mere seconds I knew the location of five patrol units and exactly what they were doing at the moment, in real time—running license checks, stopping cars, responding to a silent alarm, and checking the serial number on an abandoned bicycle. I also learned that the alarm call was a false alert, and that a key-holder/business manager called in to report that she’d accidentally set off the device. 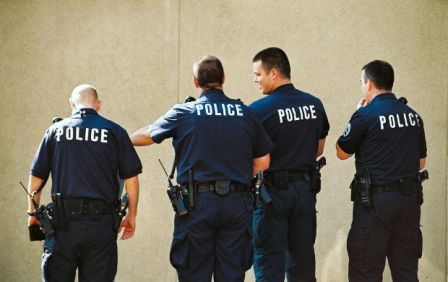 The department I’m currently monitoring for the purpose of this article was also kind enough to post a list of their 10-codes, which definitely makes it much easier for the listening public to decipher the cop lingo and jargon. Isn’t that helpful?

* Oh, oh…another burglar alarm. Front door of a business, and there’s inside motion. Officers are on the way. I’ll keep you posted.

Okay, the police know that everyone and his brother and two ugly cousins—

* Hold on. Shh… police officers are on the scene of the burglar alarm. An officer keyed his mic and I could clearly hear the alarm blasting away. Ah, just as I thought. The business owner accidentally set it off when she unlocked the front door.

By the way, this alarm business occurs almost daily, especially during the morning hours when people are still sleepy, dragging their tired bodies to work after a late night of Facebooking and Tweeting. They forget to punch in the alarm codes, and…a sudden and very loud awakening.

Back to the man and his hideous relatives. Lots of people have police scanners, or have chosen to download the apps, including dangerous gang members. So, to help police combat this problem, their looking at Apple’s latest gadget that’ll block all data transmissions within a targeted area.

At first glance, this sounded like a great idea. Then I read the fine print. When activating this data blocker, police are also able to shut down all cellphone use, including video and still photo capability. And you know what that means… Yep, no more YouTube videos of officers pepper spraying grandma and Fluffy’s six newborn kittens.

* The dispatcher just announced a single vehicle 10-50 where a truck left the roadway and ran into the woods. She’s unable to advise of injuries.

Apple’s original idea behind the technology was to put an end to cellphone use in movie theaters, concerts, and similar venues, and believe me, I’m all for shutting down cellphones in movie theaters. That. Is. Annoying.

* Suspicious male just ducked into an alley when he saw the patrol car. The officer is out on foot. He’s running. Dispatcher calls to ask if he’s 10-4. Now, that’s a nice gesture, but he really doesn’t need to have the radio distracting him, nor does he need the dispatcher’s voice alerting the suspect to his location.

I can certainly see where the data-blocking technology could be extremely helpful to police, especially during covert operations. Shutting down cellphone use in those areas would be a huge bonus, and an added layer of safety for the officers.

* Officers are 10-8. The “man running” turned out to be a teenager who thought it would be funny to run and to see if the cops could catch him. They did.

* Another officer is out of his car with a suspicious subject. Dispatch is checking to see if he’s wanted. Dispatch called back. 10-99 is negative. (Did you notice how fast that information came back? Before I could finish typing that she was checking, she’d already run the 10-99 and reported the negative status to the officer.

*Another alarm, an illegally-parked car, and a traffic stop.

* Someone’s at the police department to measure uniforms for an officer. Probably a new hire.

* A tenant is getting aggressive with apartment management. Officers on the way.

So…the technology has some wonderful advantages, like protection against the transmission of sensitive data from supposedly secure government facilities, and to help safeguard officers during dangerous operations.

However, I also see some disadvantages, such as the possibility of misuse. “Hey, this guy looks like he’s going to be trouble, so let’s shut off everyone’s cellphones in case we need to give him an attitude adjustment.”

What are your thoughts? Should the police have the un-checked power to shut down data transmissions, or should a judge have the ultimate say-so, signing off on the actions using the same procedures and guidelines followed when approving search warrants?

* By the way, the department we followed throughout this article actually has a 10-code for UFO’s…10-125. I’d love to see the look on the dispatcher’s face when an officer called that one in.

Followon TwitterSubscribeto RSS Feed
Miley: In The Thicke Of It