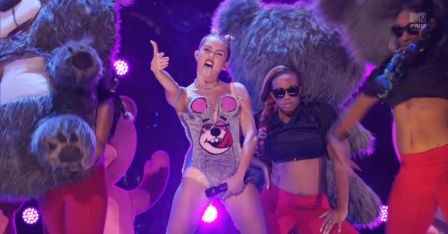 I’ve seen more than my fair share of horror. I’ve been to crime scenes and car crashes. I’ve seen spilled blood and viscera. But never have I witnessed anything as ghastly, unpleasant, or as sickening as the train wreck that Miley Cyrus dished out on the VMA awards show.

You may wonder why I, the cops and robbers guy, am addressing an MTV performance by Cyrus, but the answer is simple…I was assaulted, and assault is a still a crime, right? Yes, Miley Cyrus’s over-emphasized gyrations and tongue waggings and wigglings are something I can never un-see. I’ve been harmed by another person and I may never recover.

The overdose of Cyrus’s near skin and bones and somewhat freakish and boyish look, and her appalling gestures were so bad that my brain is threatening to pack its bags and leave home, and it assures me that it’s taking my eyes with it. They’ve each indicated the desire for a transfer to a safer location.

I try to remain current with today’s trends. Well, I at least like to know what’s going on in the world around me, even if I don’t like what I see and hear. But there isn’t enough water in the entire Atlantic Ocean to wash and scrub away the sense of “ick” I felt after seeing this garbage. In fact, I didn’t watch the entire performance. I couldn’t. I opted out just after Cyrus’s X-rated solo session with a foam finger. 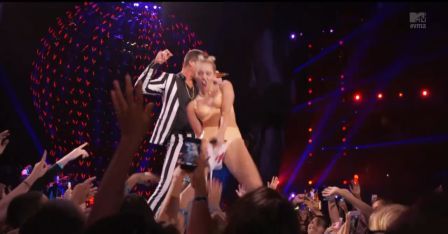 More important than the irreparable damage to my psyche, is to warn readers of The Graveyard Shift of things that could be harmful to them and to their children. Well, believe me when I say that there should be a huge warning label tattooed on Miley Cyrus’s forehead that reads…“Warning, the surgeon general of the U.S. has deemed Miley Cyrus to be extremely harmful to all teens of that impressionable age.” And, Ms. Cyrus’s CD’s, posters, and videos should be kept out of the reach of young minds.

Of course, I’m still up in the air about which was the worst, the foam finger solo session, or when Cyrus, practically in nothing but her unmentionables, went through the motions of several sexual acts with singer Robin Thicke. 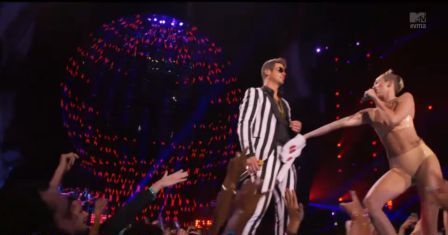 Thicke bothered me too. He showed up to the Cyrus hoochie-mama show dressed in his best Beetlejuice-go-to-preachin’ outfit, joining little Miley onstage where he participated in the assault on my poor brain. My eyes, bless their little hearts, didn’t have the smarts to turn away from the video.

Well on his way to 40-years-old, Thicke is married with children. I can’t imagine that his wife appreciated seeing her husband like this, with any female, much less a 20-year-old bizarre woman-child (I wonder if Cyrus is what Bradley “Chelsea” Manning sees in his mind as what he’ll look like after his transfer to the female gender).

Speaking of kids and their siblings, I’m pretty sure the ghosts of the entire cast and crew of the Captain Kangaroo show are more than likely already on their way to Cyrus’s house to begin some serious haunting. Dancing Bear is most likely the first in line to grab the chains and bedsheets, and has been practicing his best “BOO’s,” since it was his reputation that was most harmed. 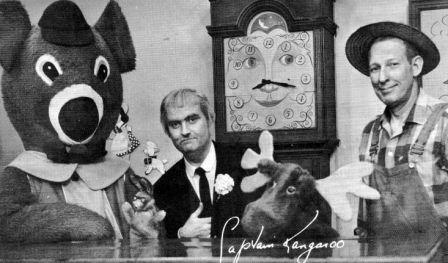 Cast of the Captain Kangaroo Show. Dancing Bear is pictured on the far left. Then there’s Bunny Rabbit, the Captain, Mr. Moose, and Mr. Green Jeans.

In fact, there’s a rumor floating around that a few of Dancing Bear’s grandchildren were on stage with Cyrus as backup dancers, and he’s not happy about it. I don’t blame him.

There was so much packed into the Cyrus and Thicke mess, that it’s difficult to pinpoint the most troubling parts.  Now, you tell me, was this something young kids should be watching? Oh, and I haven’t talked about the lyrics and the references to doing drugs at parties.

MTV bleeped the reference to using ecstasy, but not the image of Hannah Montana with her face buried between the buttocks of a seven-foot-tall black woman, an act that many are calling extremely racist. Well, I’m not sure if there was racial intent, but I do know that it was scene that’s not meant for children, or for my poor pitiful eyes and brain. 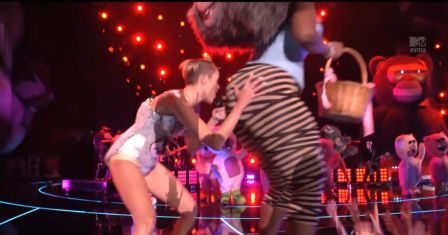 I think I’ll watch a bit of the real Dancing Bear to help cleanse my mind of the filth. No “twerking,” no foam fingers, and no gold, rubber underwear. Ah, the good old days…

An App For This, And An App For…Listening To The Police?
Scroll to top