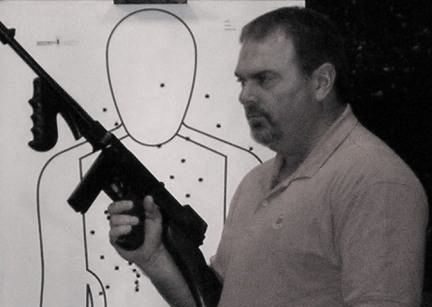 Writers often ask what kind of entrance and exit wounds are produced by police ammunition. And you know me, I’d rather show than tell. So please follow me to an underground indoor shooting range located at a sheriff’s office somewhere in the U.S.

And, since we’re conducting research, we may as well make that experience as fun as we possibly can. So let’s start out with a Thompson sub-machine gun (think Bonnie and Clyde and the early FBI). Before going any further, though, you may want to first scroll down and click on the video at the bottom of the page, letting it play as you read. Oh, and be sure to turn up the volume. The song could very well enhance your journey through this brief article. 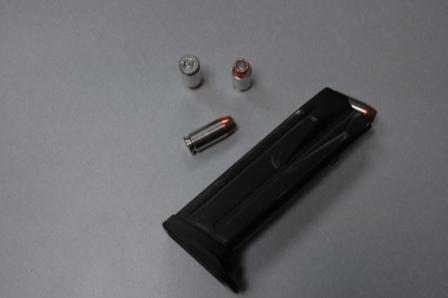 The rounds (bullets) in the photograph above are hollow-point bullets similar to the rounds fired from the Thompson sub-machine gun. This is what they look like before they’re fired. They’re about the diameter of the Sharpie pens authors use to sign books. That’s pretty close to the size of most entrance wounds – the size of the bullet.

The picture above is of one of the .45 caliber rounds after it was fired from the Thompson machine gun. The round passed through the self-healing wall tiles in the firing range, striking the concrete and steel wall on the the other side. Hitting the solid surface head-on caused the bullet to expand and fracture, which creates the exit wound we see in shooting victims (the hollow point fills with the material it strikes causing expansion of the bullet).

To give you a better idea of just how much the hollow point expands when hitting some solid, the round copper center you see in the photo above is the size of the original .45 cal. bullet.

Many times, bullet slivers break off inside the body causing further internal damage. The size of an exit wound depends on what the bullet hits inside the body. If the bullet only hits soft tissue the wound will be less traumatic. If it hits bone, expect much more damage. Easy rule of thumb – the larger the caliber (bullet size), the bigger the hole.

Bullets that hit something other than their intended target, such as a brick wall or a metal lamp post, can break apart sending pieces of flying copper and lead fragments called shrapnel into crowds of innocent bystanders. Those flying fragments are just as lethal as as any intact, full-sized bullet.

FYI – Bullets don’t always stop someone. I’ve seen shooting victims get up and run after they’ve been shot several times. And for goodness sake, people don’t fly twenty feet backward after they’ve been struck by a bullet. They just fall down, moan a lot, and bleed. That’s if they don’t get back up and start shooting again.