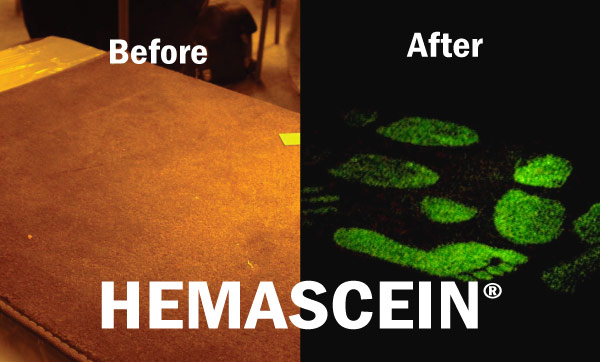 Hemascein is a product that’s used by investigators for revealing latent bloodstains. Before Hemascein investigators sprayed luminol-type chemicals and then had to hurry with the examination and photography before the glow faded away, sometimes as quickly as 30 seconds. Not so with Hemascien. It’s a very stable product that “holds the glow” for up to 13 minutes and doesn’t require special cameras to record the image.

Normally, with luminol-type products, investigators had to complete their examinations and evidence collections prior to using the blood-revealing products because they degraded DNA. Hemascein doesn’t destroy DNA, which is an advantage because officers can learn where the incident occurred early in the investigation, allowing them to focus their attentions in the proper areas.

Heme Stix are used as a presumptive test for the detection of blood at crime scenes. Here’s a video that accurately demonstrates the use of various methods of testing for blood.

Hexagon OBTI is a test used to determine if a bloodstain is human blood. The strip turns blue if the sample is indeed human blood.

Synthetic blood is used for training with Heme Stix, Luminol, Hemascein, and other products. There’s even a product available for training called Fresh Scab that simulates wounds and, yes, fresh scabs.

Bluestar Magnum is a super-duper form of luminol that’s used to detect minute specks of blood, such as those found embedded in the threads of a suspect’s clothing, even after the clothing has been washed.

Why I Write This Blog
Scroll to top