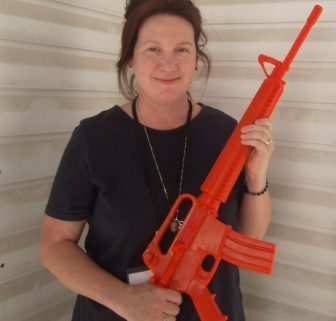 The empty apartment looks abandoned. It smells abandoned too, like dust and sunbleached carpet and old sawdust, like no one has ever lived here. And yet there you are, on orders from your SWAT team leader, at the head of the stack, shield in front of you, semi-automatic in hand. Your second is ready with a breaching round in her shotgun, and the officer behind her has his rifle poised, in case the door she’s about to blast open reveals a threat more imminent than your intel has foreseen.

You hold up three fingers. Your team knows what this means. On three. You can’t count out loud, not on a dynamic entry. You gotta shock and awe, surprise and dominate, and that means tiger-soft stealth at the door. So you count with your entire body, a slight bend in the knees for each tick of the countdown. Three . . . two . . . one . . .

And then you unleash the whirlwind.

Can you feel it? The twin currents of adrenalin and epinephrine smoking through your veins like a spark eating up a fuse? I could. Because the “you” in the above scenario was actually me (see the photo above for proof). And while the scenario itself was staged—with fake guns and fake intel—the physical response I described was very very real.

And so was the team leader. His name is Captain Randy Shepherd, and he works for the Guilford County Sheriff’s department. He was the instructor for the Building Searches workshop during my most recent Writers’ Police Academy. He’s awesome in many superhero SWAT-cop ways, but most striking to me is his good-natured generosity in sharing what he knows with a bunch of detail-hungry mystery writers who are more likely to drop their fake guns (oops) than demonstrate a proper clearance strategy.

Patient. Did I mention Captain Randy is patient?

So are all the other instructors. Writers’ Police Academy features a slate of professionals across several categories (law enforcement at local, state and federal levels; EMTs and emergency responders; firefighters; legal specialists) but they all share one common trait—they run toward danger. They confront the ruthless and the lawless. They stand up when ordinary citizens can’t. And for one weekend a year, they gather at Writer’s Police Academy to share what they know with a conference full of mystery writers.

Which is how I ended up with a bright orange fake assault rifle, barking orders at a bunch of complete strangers while they scoured closets and balconies and kitchen cabinets for bad guys. I posted up in the living room, alert for any danger. And wouldn’t you know it, but the baddest of the bad guys tried to sneak in behind my team—Captain Randy himself. I saw the doorknob turn, and I couldn’t help grinning as I raised my rifle and waited for him.

Captain Randy: Did you think to check that closet behind you?

Me (whirling around): Oh crap! What closet?

Captain Randy: And you just turned your back on a threat. You are now dead.

Me: (smacks forehead and mutters curses)

Oh well. Guess I’ll be signed up for this workshop again next year. One more chance for me and my orange gun to save the day.

You can find Tina online at her official website — www.tinawhittle.com.