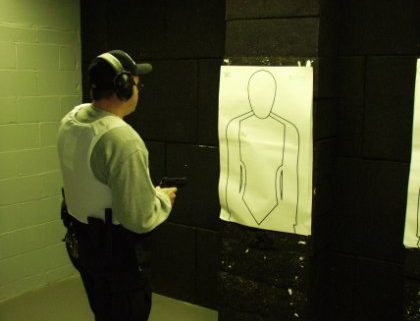 Years ago, back when I had a full head of hair and my chest hadn’t fallen to my waistline, I was in pretty good shape, physically. I could run for miles, do pushups until the cows came home (whatever that means), and I could bench press just under 400 pounds. I was heavily into Aikido and Chin-Na and even had my own school where I taught and trained.

Actually, I trained really hard, almost obsessively, because I wanted to be able to handle myself when criminal suspects decided to try and fight their way to freedom. The good guys should always win, right?

Indeed, that was my message to the officers who participated in the various classes I taught at the police academy—I WILL SURVIVE. I wanted those three words to come to mind no matter how dire the situation.

It’s a mental thing, and believing you will make it through a situation is often the key to coming out on top. If an officer gives up and abandons the will to live, then he/she could easily succumb to wounds/injuries.

So, before we move on, let’s all say it together. I. WILL. SURVIVE.

After instilling the notion that cops absolutely must come out on top in any physical battle, my next challenge was to give officers the tools/training/techniques and tactics they needed to achieve that goal. Sometimes, though, the challenge was a bit more “challenging” than others.

My primary areas of expertise were defensive tactics and officer survival. I was the instructor who taught the techniques and tactics used by officers when bad guys needed a bit of gentle persuasion to wear a shiny set of Peerless bracelets, or to take a nice leisurely ride to the sheriff’s concrete hotel.

The first day of Hell Week, as our class was often called, was always a real treat for instructors. Have you ever watched any of the Police Academy movies? Well, a very similar group of rookies is normally what I faced at each academy.

Standing before me, the recruits usually ranged from the tall, uncoordinated and Frankensteinish, to the tiny, mouse-like and bookwormish. Then there were the Tackleberry’s, the gung ho recruits who couldn’t wait to “shoot ’em all and save the world.” And I’d be remiss if I omitted the “I know everything’s”. The “you can’t teach me anything’s”. The cocky “I’m a karate expert and I trained with Bruce Lee or one of the Gracie’s (why do almost all wannabe martial arts experts claim to have trained with one of Royce Gracie’s cousins, nephews, sisters, or a third cousin on his mama’s daddy’s brother’s side of the family? Never fails. Oh, and let’s not leave out the new cop-soon-to-be’s who don’t believe in using any kind of force on anyone, for any reason.

Sure, Junior, politely asking a murdering psychotic, drugged-up behemoth with I Kill Cops tattooed in human blood across his forehead, to please have a seat in your patrol car, will certainly work every time. No need for handcuffs or the cage. And while you’re at it, why not bat your eyelashes while asking him to pretty please put the bloody knife back into his pocket next to his pistol and adorable homemade pipe bomb.

And, finally, there’s normally one recruit who cries real tears when they feel the first bit of pain when learning…duh…pain-compliance techniques.

Rule number one – Thou shalt not cry during police training. Save the tears for puppies, babies, and slicing and dicing onions.

To kick things off, the first order of business was to determine how the group measured up as far as their level of physical fitness, starting with the basics—a few pushups, sit-ups, stretches, etc. And, their first one-mile run (by the end of the week they WILL run five miles).

Okay, that was a waste of time. The city was surely doomed. When this bunch of pukers, criers, and overweight video-gamers finally hit the streets the bad guys would have a field day.

The majority of the rookies barely made it across the parking lot to start the run, sweating like two-bit diner hot dogs under a warming lamp, and huffing and puffing and wheezing and sounding like a cat coughing up a two-pound hairball. But they would survive. I was determined they would. Besides, if they didn’t survive Hell Week, I’d kill them.

But survive they did. Sure, one or two couldn’t measure up and they’d drop out or we’d dismiss them from the academy, but most made it through just fine. And on the last day, after the five mile run, no one threw up, no one cried, and everyone looked pretty darn good.

And, just for good luck, I had them drop and give me twenty push-ups before sending them out to the streets with their training officers.

When all was said and done, I and the other academy instructors had given the recruits everything they needed to survive. It was up to them to use it.

If nothing else, I hoped they’d remember those three words – I WILL SURVIVE.

After all, those three simple words can make the difference between going home, or not.

Followon TwitterSubscribeto RSS Feed
What Do Handcuffs And An Anniversary Have In Common?

Guilty, Or Not?: Skip The Polygraph and Reach For The Ice Cream
Scroll to top