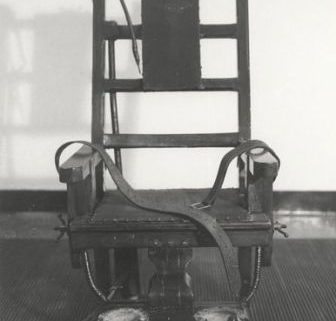 Nearly two decades have passed since I watched serial killer Timothy Spencer, The Southside Strangler, die in the electric chair. I knew the details of the case, including that Spencer had been released from prison after serving three years on a ten year sentence for burglary. His release from prison, however, was conditional. He was to live in a state-run halfway house for a predetermined amount of time. The year was 1984. DNA testing was not yet available to law enforcement.

During Spencer’s weekends away from the halfway house is when he added other, unauthorized, stops to his schedule. During an eleven week span Spencer visited quiet suburban neighborhoods where broke into the homes of four women. In each of the break-ins, he attacked the women, bound their hands, and then brutally raped and killed them. His murder weapon in three of the four cases was a cleverly designed ligature that tightened more and more as the victim struggled. Detectives weren’t able to locate a single shred of discernible evidence at either of the crime scenes, but they collected any and everything they thought might help locate the killer, including samples of the murderer’s semen.

Finally, a relentless investigator named Joe Horgas heard that British police had identified a killer through DNA matches of blood and semen. Horgas then contacted a lab that specialized in DNA testing and they agreed to help. Horgas soon received the news he’d been hoping to hear—Spencer’s DNA matched the semen samples collected by detectives. Spencer was then arrested, tried, and convicted. It was four years after the first rape and murder.

Timothy Spencer was the first killer in the U.S. sentenced to die based on DNA evidence. I watched him die, and believe me, death by electrocution is far from being a passive exit from this world. A man moaning and breathing hard during lethal injection has nothing on those who’ve ridden Old Sparky on the journey to wherever it is they go after all is said and done. But it is what it is.

Now, back to Spencer and his last day alive on this planet. I mentioned earlier that he showed no signs of remorse, and that he’d offered no final words. But, as years have passed, I’ve often wondered (who knows why) what Spencer had selected as his final meal. I’ve never found out, but here’s why I mentioned it.

Recently, a Cornell University study has concluded that a condemned person’s last meal selection can actually shed a little light as to his/her true guilt or innocence.

For example, researcher Kevin Kniffin, found that inmates who perceive themselves as innocent likely request a meal of fewer calories, or they decline to receive a last meal altogether (Kniffin’s study included the last meals of 247 people who were executed in the United States between 2002 and 2006).

Further, inmates who claimed innocence were 2.7 times more likely to decline a last meal than those who admitted guilt.

So, you be the judge. Guilty or Innocent?

3. Victor Feguer – a single unpitted olive presented on a ceramic plate and accompanied with a knife and fork.

*By the way, Patricia Cornwell’s first book was based on Spencer’s case.

Followon TwitterSubscribeto RSS Feed
They Will Survive: Thou Shalt Not Cry During Police Academy Training