Six years ago today I posted the very first article on The Graveyard Shift. My book on police procedure had been out for a few months and was, to my surprise, doing extremely well. So, I thought a blog about cops and robbers might be of some interest to a few people, and maybe even a nice compliment to the book.

The first article was quite simple, actually. In response to a writer’s question about handcuffs, I posted a picture of two pairs of restraints along with a brief description of each. Believe me, I had no clue what I was doing. But I managed to get the information out to a whopping sixty-eight people that day, and I was very pleased with the overwhelming response to my first attempt at blogging.

Today, well over 3 million individual people have visited The Graveyard Shift, and I’ve long ago stopped counting how many clicks come to the site and its archives. People from all walks of life visit, including writers (of course) readers, doctors, lawyers, police officers, teachers, directors, producers, actors, screenwriters, showrunners, school children (they use the site as research for class projects) prison officials and inmates, and, well, you get the idea. A whole lot of people visit this site.

After writing and posting articles to this blog everyday for six years, without fail, including while I was in the hospital for surgery and a subsequent MRSA infection that resulted in the infectious disease doctor telling my wife and me that I needed to get my affairs in order because I would not survive (whew! talk about a run-on sentence…), I decided the blog wasn’t enough. Writers needed to see this stuff in person. They needed to touch and smell and hear all things cops, firefighting, and EMS. So, along comes the Writers’ Police Academy.

Now in it’s 5th year at the Guilford Technical Community College Public Safety Department (police, fire, and EMS academy), the WPA is a phenomenal event. Our first year at GTCC, we had a little over 100 recruits (attendees), and I was sweating bullets up until the day of the event, hoping we had enough people to break even and still have a little bit of cash left to donate to the criminal justice academy. We squeaked by by the skin of a single tooth.

To date, we’ve donated slightly under $50,000 to the foundation, with more on the way this year!

Yesterday was the opening of the 2014 WPA registration, and the response was totally out of this world. The event sold out in less than thirteen hours! And when I say sold out, we’re talking well over double the number of attendees we saw five years ago.

The WPA is now a huge event that takes place in several buildings and covers a pretty large piece of real estate. It’s a massive event that’s like no other on this planet.

Anyway, back to the blog. As I said, today marks the sixth anniversary and the following is the very brief article that started the ball rolling. We’ve certainly come a long way together since this post first appeared.

By the way, I cannot begin to thank you for all the support you’ve provided all these years. Here’s to at least six more… 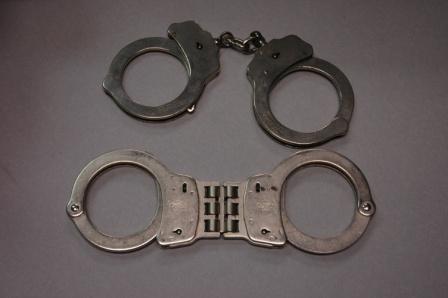 Question: Do all cops use the same type of handcuffs?

The two main types of handcuffs used by law enforcement are pictured above. The top image is of a pair of chain-link handcuffs. Most police officers prefer to carry and use chain-linked cuffs because the chain between the bracelets swivels, making the cuffs flexible and easier to apply to the wrists of combative suspects.

The lower image is of a pair of hinged cuffs. These are more commonly used when transporting prison or jail inmates. Hinged cuffs are not flexible (the hinge between the two bracelets does not swivel) which greatly reduces wrist and hand movement. This type of cuff is sometimes difficult to apply to the wrists during a scuffle.

Both style cuffs operate using a ratchet and pawl locking system. Both are equipped with a second lock (double-locking) to prevent any further tightening of the ratchet which can injure the wrists of the cuffed suspect.  The second lock also prevents prisoners from picking the lock.

They Will Survive: Thou Shalt Not Cry During Police Academy Training
Scroll to top