Thermal imaging and night vision are NOT the same. Night-vision equipment needs some sort of light to work properly. Thermal imaging devices don’t use light to operate. Instead, they detect differences in temperature. For example, TI can see various building materials, such as wall studs, floor joists, HVAC ducting, and window and door frames, inside a structure. The equipment is able to do so because of the differences in densities of the materials (different densities radiate heat differently).

A thermal imaging device can detect hidden compartments inside a building, such as hiding places and secret compartments used for concealing narcotics, cash, and weapons.

Police aircraft are often fitted with thermal imaging equipment called FLIR (Forward Looking Infrared ) systems. These devices are normally attached to the front of the aircraft, like the one pictured above (the upside-down, black and white, dome shaped object hanging below the door).

Thermal imaging/FLIR device and videocamera. The device can rotate a full 360 degrees, and has zoom capability.

The FLIR (pronounced – fleer) is gyro-stabilized to ensure steady imagery (images can be recorded on a video recorder inside the aircraft). A cockpit monitor also allows the crew to view the images in real time.

Law enforcement officers are able to search large areas at night, in total darkness, for missing and wanted persons. They’re also able to detect freshly turned earth (graves), which enables officers to locate the body of a murder victim. 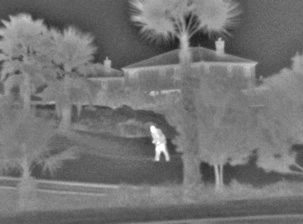 Thermal imaging detects a human walking  through a neighborhood. 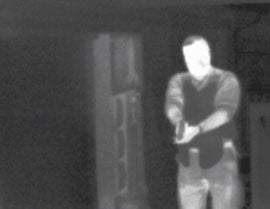 Night vision scopes must have some sort of light source to operate properly. The images are seen in the familiar green tone. 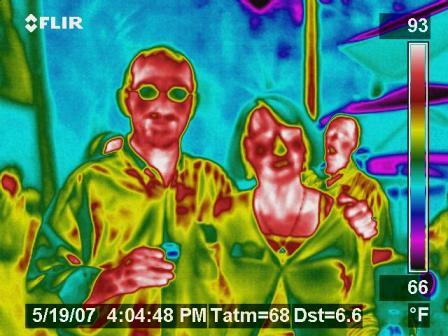 The U.S. Supreme Court has ruled that the use of thermal imaging devices on private property, such as a home or personal office, requires a search warrant.

Suspicious that marijuana was being grown in petitioner Kyllo’s home in a triplex, agents used a thermal imaging device to scan the triplex to determine if the amount of heat emanating from it was consistent with the high-intensity lamps typically used for indoor marijuana growth. The scan showed that Kyllo’s garage roof and a side wall were relatively hot compared to the rest of his home and substantially warmer than the neighboring units. Based in part on the thermal imaging, a Federal Magistrate Judge issued a warrant to search Kyllo’s home, where the agents found marijuana growing. After Kyllo was indicted on a federal drug charge, he unsuccessfully moved to suppress the evidence seized from his home and then entered a conditional guilty plea. The Ninth Circuit ultimately affirmed, upholding the thermal imaging on the ground that Kyllo had shown no subjective expectation of privacy because he had made no attempt to conceal the heat escaping from his home. Even if he had, ruled the court, there was no objectively reasonable expectation of privacy because the thermal imager did not expose any intimate details of Kyllo’s life, only amorphous hot spots on his home’s exterior.

Held: Where, as here, the Government uses a device that is not in general public use, to explore details of a private home that would previously have been unknowable without physical intrusion, the surveillance is a Fourth Amendment “search,” and is presumptively unreasonable without a warrant. Pp. 3—13.

(a) The question whether a warrantless search of a home is reasonable and hence constitutional must be answered no in most instances, but the antecedent question whether a Fourth Amendment “search” has occurred is not so simple. This Court has approved warrantless visual surveillance of a home, see California v. Ciraolo, 476 U.S. 207, 213, ruling that visual observation is no “search” at all, see Dow Chemical Co. v. United States, 476 U.S. 227, 234—235, 239. In assessing when a search is not a search, the Court has adapted a principle first enunciated in Katz v. United States, 389 U.S. 347, 361: A “search” does not occur–even when its object is a house explicitly protected by the Fourth Amendment–unless the individual manifested a subjective expectation of privacy in the searched object, and society is willing to recognize that expectation as reasonable, see, e.g., California v. Ciraolo, supra, at 211. Pp. 3—5.

(b) While it may be difficult to refine the Katz test in some instances, in the case of the search of a home’s interior–the prototypical and hence most commonly litigated area of protected privacy–there is a ready criterion, with roots deep in the common law, of the minimal expectation of privacy that exists, and that is acknowledged to be reasonable. To withdraw protection of this minimum expectation would be to permit police technology to erode the privacy guaranteed by the Fourth Amendment. Thus, obtaining by sense-enhancing technology any information regarding the home’s interior that could not otherwise have been obtained without physical “intrusion into a constitutionally protected area,” Silverman v. United States, 365 U.S. 505, 512, constitutes a search–at least where (as here) the technology in question is not in general public use. This assures preservation of that degree of privacy against government that existed when the Fourth Amendment was adopted. Pp. 6—7.

(c) Based on this criterion, the information obtained by the thermal imager in this case was the product of a search. The Court rejects the Government’s argument that the thermal imaging must be upheld because it detected only heat radiating from the home’s external surface. Such a mechanical interpretation of the Fourth Amendment was rejected in Katz, where the eavesdropping device in question picked up only sound waves that reached the exterior of the phone booth to which it was attached. Reversing that approach would leave the homeowner at the mercy of advancing technology–including imaging technology that could discern all human activity in the home. Also rejected is the Government’s contention that the thermal imaging was constitutional because it did not detect “intimate details.” Such an approach would be wrong in principle because, in the sanctity of the home, all details are intimate details. See e.g., United States v. Karo, 468 U.S. 705; Dow Chemical, supra, at 238, distinguished. It would also be impractical in application, failing to provide a workable accommodation between law enforcement needs and Fourth Amendment interests. See Oliver v. United States, 466 U.S. 170, 181. Pp. 7—12.

(d) Since the imaging in this case was an unlawful search, it will remain for the District Court to determine whether, without the evidence it provided, the search warrant was supported by probable cause–and if not, whether there is any other basis for supporting admission of that evidence. Pp. 12—13.

Scalia, J., delivered the opinion of the Court, in which Souter, Thomas, Ginsburg, and Breyer, JJ., joined. Stevens, J., filed a dissenting opinion, in which Rehnquist, C. J., and O’Connor and Kennedy, JJ., joined.