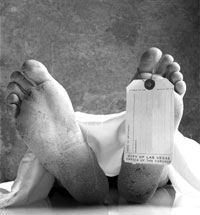 Bodies are placed in body bags and delivered to the morgue in specially equipped vehicles.

Bodies are placed on gurneys and rolled onto scales where they’re weighed.

After weighing, the body is placed inside a cold room until autopsy. Black or dark gray, leak-resistant body bags are used  pre-autopsy. The paper bag resting on the body of the murder victim at the top of the photo contains the victim’s personal belongings.

Cold rooms also store amputated body parts. The gray trays on the right contain severed limbs. White, paper-like body bags, like the one lying on the gurney in the rear of the cold room above, are used post-autopsy for bodies waiting to be transported to funeral homes.