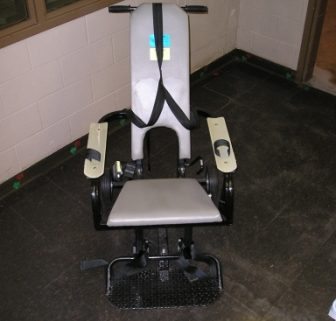 Police, sheriff’s deputies, and prison officers have always encountered situations where traditional handcuffs injure unruly or combative prisoners during transport situations. The steel arms of cuffs and leg irons can irritate or cut into the flesh of the inmate’s wrists and ankles. The metal can also be used as a striking weapon against the transporting officers.

The Grip Restraint System is fabricated from a material that’s similar to the web-like strapping used for manufacturing seat belts. The locking system uses a standard handcuff key and does not require double-locking like traditional steel cuffs. The chance of injury to prisoner and officer is greatly reduced when employing the use of The Grip.

The Grip is also available in an MRI-safe version. Normally, officers are forced to remove handcuffs when an inmate undergoes MRI screening, which is an extreme security risk.

* The Grip would not be effective for street use by patrol officers.