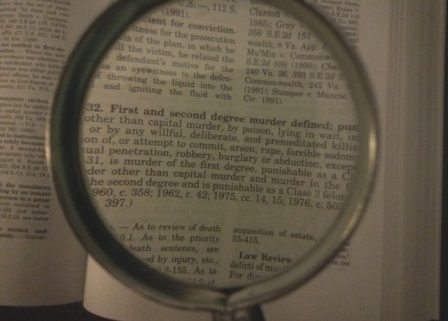 I had a morning appointment that prevented me from devoting a lot of time to writing a new blog post. So here’s some “stuff” I threw together at the last minute. I promise to do better in the coming days.

Murder – The unlawful killing of another person. The crime is usually deliberate or committed during an act that showed total disregard for the safety of others.

To get everyone’s attention a bank robber fires his weapon at the ceiling. A stray bullet hits a customer and she dies as a result of her injury. The robber has committed murder.

Manslaughter – Even though a victim dies as a result of an act committed by someone else, the death occurred without evil intent.

While watching a wrestling match on television Ronnie Redneck got into a rather heated argument with his best buddy, Ima Weakguy. During the exchange of words Weakguy begins yelling obscenities. With the delivery of each four-letter word he jabbed a bony index finger into Redneck’s rib cage.

Redneck , a man of little patience, took offense at the finger-poking and used both hands to shove Weakguy out of his personal space. Well, Weakguy, who was known countywide for his two left feet, tripped over his sleeping coon dog, Blue, and hit his head on a nearby case of Budweiser. He immediately lost consciousness and, unfortunately, died on the way to the hospital as a result of bleeding and pressure inside the skull. Weakguy’s death was not intentional, but Ronnie Redneck finds himself facing manslaughter charges.

Jurisdiction – A law enforcement agency’s geographical area where they have the power and authority to enforce the law. 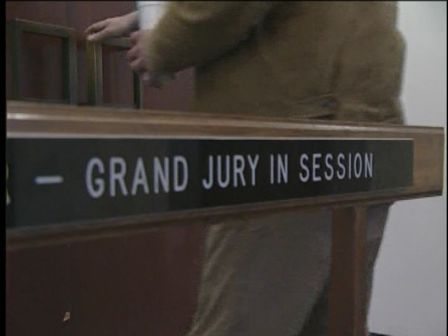 Forfeiture – The government is allowed to seize property used in the commission of a crime. Many police departments benefit from the forfeiture of items such as, cash, cars, homes, boats, airplanes, and weapons. These items may be sold at auction, or used by the police. For example, a 2010 Mercedes was driven by drug dealers when making their deliveries. Police stop the car and arrest the occupants for distribution of heroin. The car is seized by the officers who fill out the proper asset-forfeiture paperwork and turn it over to the DA. The prosecutor (for a cut of the proceeds) handles the forfeiture/legal process. The vehicle is later forfeited (by the court) to the police department. They, in turn, assign the vehicle to their drug task force where officers use it as an undercover car.

Double jeopardy – The Fifth Amendment rule stating that a person cannot be made to stand trial twice for the same offense.

Corpus delicti – The main object of a crime. The proof that a crime has taken place. In the case of murder, the body is

Badge Bunny – A woman who is romantically interested in police officers and firemen, and pursues them relentlessly.

The Arrest That Made Me Cry…sort of
Scroll to top