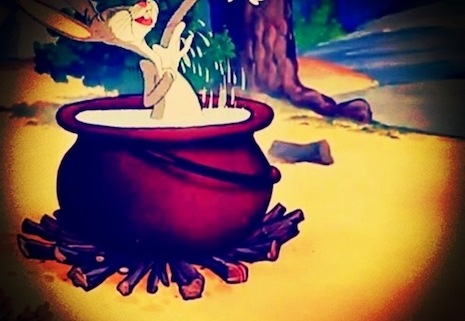 Okay, you’re at your desks with hands poised above the keyboard. Thoughts of murder, chaos, and of your 100th six-figure book deal churn inside your head like the winds of an F-5 twister that’s just touched down in a midwestern mobile home park. This. Is. Your Best. Story. And it is exciting.

Now it’s time for the call to action. The time when it’s your duty to coax, draw, persuade, and perhaps even drag readers throughout the hero’s journey until they reach the final page of your book.

Along the way, of course, you’ll concoct dangers and thrills, twists and turns, and risks far more convoluted and sometimes more perilous than those undertaken by the average human. Readers do sometimes enjoy the fantasy of living life through the eyes of fictional characters, right? After all, being Jack Reacher or Kay Scarpetta for a few hours could be fun and thrilling.

So off you go, clacking away at the keyboard, transforming the tale you’ve spent months creating a saga, either on paper for you plotters or stored in your mind for those of you who’re pansters, that’ll sit on the top shelf in bookstores all around the world.

In your mind you picture the blurbs and promo ads sent out by your publisher and publicists. Each of them promise your fans “It’s THE book of a lifetime.” “A book you can’t put down until the final page is turned.” “Lock your doors before reading this thrilling ride into the unknown!”

“The crime of the century.”

Creating a murder based upon terminological inexactitude, one that’s committed by a pretend villain in a make-believe world, a crime that’s to be solved by a fictional hero, can be a daunting task for many writers. This is especially so when the writer is clue-challenged when it comes to first-hand knowledge of actual death scenes. But help is on the way and it comes in the form of your imaginations, along with a little help from Dr. Edmond Locard.

So, whether you’re a panster or a plotter, my advice to you, the writer of twisted tales, is to carefully consider Dr. Locard’s Exchange Principle (see below) before writing the first word. Doing so could elevate your stories to levels you never thought were possible to achieve.

I know, you’ve done quite well in the past, but readers are changing. Their knowledge of forensics and police investigations is growing with each passing day and with with each new TV show featuring brilliant experts who really know their stuff. And those folks don’t hesitate to share their expertise with an eager viewing audience, an audience who’ll later pick up a book to read for enjoyment only to find that the author doesn’t know the difference between cordite and kryptonite. By the way, neither cordite nor kryptonite should appear in crime fiction set in modern times.

Cordite manufacturing CEASED somewhere around the end of WWII.

They don’t make the stuff anymore. It’s not used in modern ammunition. Nope. Not there. Don’t use it. Don’t make it.

As a former police investigator, I’m often asked what I think would be the perfect murder and my response is typically quick and always the same … “there’s no such thing as a perfect murder.”

I say this because I’m a firm believer in Dr. Locard’s Exchange Principle, a theory stating that always, without fail, when two objects come into contact with one another, each of those objects take something from the other or leave something behind. According to Locard, “It is impossible for a criminal to act, especially considering the intensity of a crime, without leaving traces of this presence.”

Locard’s Principle was on my mind throughout every case I investigated. It helped me to maintain my focus on the tiniest of details so that nothing went overlooked, not even the smallest of fibers.

Therefore, writers must, and I emphasize the word MUST, consider keeping this simple rule of thumb in mind when creating crime scenes and scenes of crimes, IF you’re going for realism. You do know there’s a difference between a crime scene and a scene of a crime, right? 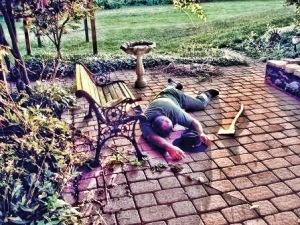 Crime Scene and scene of the crime are not always synonymous. A crime scene is anywhere evidence of a crime is found (a dumpster located five miles away where a killer dumped the murder weapon, or the killer’s home where he deposited his bloody clothes, where the body was found if removed from the scene of the crime, etc.). Scene of the Crime is the location where the actual crime took place (where the killer actually murdered his victim).

We’ve all heard about the killer who stabs someone with an icicle, a murder weapon that melts, thus leaving no trace evidence. Well, this is far from the truth since the killer had to approach the victim and he/she had to leave the scene. Therefore, he either left something behind or he took something with him (soil on the shoes, DNA, etc.).

There is trace evidence of some sort everywhere in every crime scene—again, footprints, DNA, fibers, tiny shards of glass, blood, etc. The weak link in a case would be, unfortunately, the detective who doesn’t dig deep enough or long enough or hard enough to find the evidence. This is true in all cases. The evidence is ALWAYS there, somewhere, begging to be found. It’s up to the savvy detective to locate it.

Disposing of bodies in clandestine grave sites are a fantastic means to hide a big piece of evidence … the body. Still, the killer was at the scene of the crime, therefore he left evidence. He had to move the body to the burial site. More traces of evidence—footprints, toll receipts and images captured by cameras at toll booths, gas purchases, purchases of burial equipment, and on and on and on. And then there’s the hound dog who drags a human femur to his owner’s back doorstep. He, the killer had to arrive at and then leave the scene. Again, the evidence is there for the taking—tire tracks, footprints, a leaf, a unique plant seed, a hair, or mud stuck to the soles of his shoes, etc. The list is practically endless. 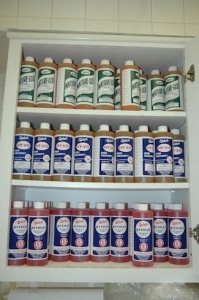 What if a killer committed the murder in a funeral home embalming room, a place that sees hundreds of dead bodies pass through its doors. It’s a place where death “evidence” is routinely and efficiently scrubbed away.

Think about it for a moment. A funeral home where tons of body fluids and DNA have the potential of co-mingling and are routinely cleaned away using chemicals that can and do eliminate the typical clues searched for by investigators.

Yep, blood, saliva, nitrous and other fluids are scrubbed from the room, and all other physical evidence (breaks in bones, gun shot and stab wounds, etc, are totally destroyed during cremation. It’s the perfect It’s the perfect spot for the perfect crime, right?

Well, not so fast. Remember Locard, “when two objects come into contact with one another, each of those objects will take something from the other or leave something behind.” The victim had to arrive at the funeral, therefore evidence of the trip there would generate some sort of evidence trail. However slight it may be, it’s there.

Still, an inexperienced investigator could miss the clues in a funeral home setting.

To make it even more difficult for the detective, there’s this …

Coffin materials are generally selected so as to minimize pollution generated when cremation takes place. Non-combustable coffin do-dads are removed (handles, knobs, hinges, etc.). PVC, heavy metals, solvent-based paints and other toxic resins are also removed or not at all used.

Cremation containers should be completely enclosed, rigid, leak resistant, and definitely combustible. They may be made of cardboard or particle board, wooden, or even a those nice and shiny, highly polished caskets, as long as they’re combustible and non-toxic. Metal caskets cannot be cremated.

Implants of any types which contain power sources are removed from the remains. Also removed are prostheses, jewelry, and non-combustible parts of clothing.

Cremation takes anywhere from 30 minutes in the case of the very small, to over two hours. The human body contains between 65% and 85% water by weight, so a temperature high enough to facilitate the combustion process—up to 2,000 degrees F is where the cremation process typically occurs.

Not for the Squeamish!!

Combustion in the cremator occurs in two steps

When complete, funeral home employees (or the villain of your story) sweep the remains into a tray where they’ll sit to cool. This step is similar to when grandma baked a pie and then allowed it to cool on the sill of an open window before slicing it into individual serving sizes.

Once sufficiently cool, the employee, or bad guy, sifts through the ashes to remove bit of metal, if any (evidence). Any bone fragments are pulverized until all until the remains are less than 1/8” in size.

The cremated and squashed remains are then transferred to a plastic bag and placed into an urn. Or, if this step involves a murderer, the remains would most likely wind up scattered in a field down by Old Man Kelsey’s creek.

The “Other” Cremation: Human Soup 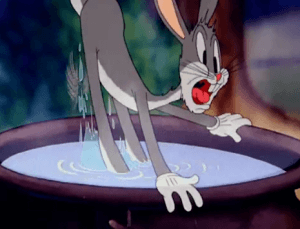 Alkaline hydrolysis, AKA “water, or green cremation”, is a water-based dissolution process that uses alkaline chemicals, heat and pressure and agitation to speed up natural decomposition. Once complete, all that’s left behind is bone residue and a liquid … human soup. This “human broth” is, believe it or not, considered sterile and is simply discharged with into local sewer system and is then treated as any other wastewater product (the stuff that goes down the drains of your home).

Leftover bone material is then pulverized and placed into an urn. Since there is more leftover bone material than with cremation by fire, these remains require a larger urn. And, by the way, due to the larger amount of “leftovers,” it would be more difficult for the villain of your story, if this setting is your thing, is someone who most likely works in a funeral home, to hide the remains created by this method of cremation.

Still, these methods of hiding and/or destroying evidence are far more effective than merely shooting Bill Imdead and then leaving his corpse on the living room floor to be found by cleaning company workers.

The perfect murder? No, but pretty darn close.

*Someone who commits a murder inside a crematorium by hastily shoved the body into the cremation chamber, and then flees the scene, leaving the body to reduce to ashes, would leave behind a mound of clues—bone, teeth, jewelry, implants complete with serial numbers, etc. Sure, the majority of the body parts would be gone, but it would still speak to investigators … if they took time to listen. 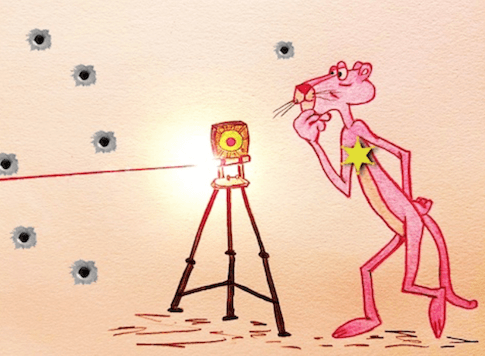