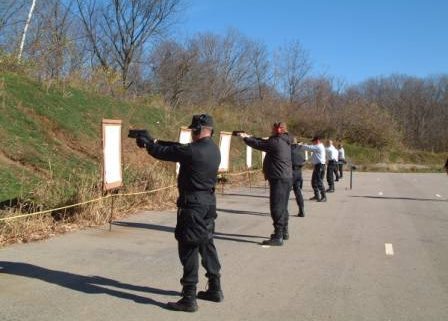 Those words, or something similar, are heard by officers all over the country as they attend their annually mandated firearms qualification. Yes, once or twice each year all officers get the word to report to the range to qualify with their duty weapons. So many of them, for the first time since the last mandatory qualification, pull out the gun cleaning kits to spruce up the old sidearms. Then, with their pistols all clean and properly oiled, many of them begin to feel a bit of anxiety creeping up. Suppose I can’t qualify? What happens if my scores aren’t high enough? You know, my eyesight has gotten a little weaker since last year. What if I miss the entire target? Will I lose my job?

Well, those are worries that should never arise because officers should be required, or at least allowed, to shoot more often. Practice by repetition is the key to firearms proficiency. And budget woes should never affect an officer’s ability to defend him/herself. Yet, ammunition and training time are normally some of the first things to go when funds get tight. But that’s the way it is and that’s the way it’ll probably remain. So cops deal with what they have, which sometimes isn’t much. Still, do departments make the most of what little firearms training time they provide? Easy answer…NO. Most of them do not.

Many departments still have their officers line up on the range, wait for the command to fire, and then blast away at stationary paper targets, hoping they’ll punch enough holes in them so they can pass the qualification requirements. Then they call it quits until next year. But is that enough to survive in today’s increasingly dangerous world? Probably not.

Each week we report the line-of-duty deaths of the officers killed during the preceding week. And many of those officers were killed by gunfire, in shootouts with armed suspects. Not in gun battles with stationary paper targets. Now, I’m not saying that either of those officers weren’t properly trained. Not at all. Sometimes you do everything right and the worst still happens. What I am saying is that there are things that can, and should be taught to each and every officer that could help them in the field.

As I stated earlier, officers train best through repetition. And they train best by learning to react to various threats and situations…over and over and over again. Then, when those events present themselves, officers will revert to their training and react appropriately. Therefore, it is an absolute must that officers spend at least some time training under “threat” situations. After all, suspects on the street are simply not going to stand perfectly still with their hands hanging at their sides so that officers can squeeze off 50 or 60 rounds at them. So why should officers train as if they’re going to someday face a one-dimensional paper bank robber?

Sure, some practicing with stationary targets is necessary. That’s how cops learn the basics. But what else can they do to better prepare themselves for the real bad guys? 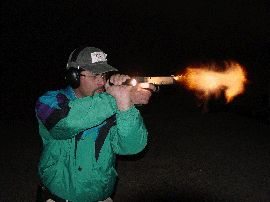 1. Shoot in low light situations. Not all firefights are going to happen at noon. In fact, many shooting situations occur at night. So why practice all shooting in the bright light of the day? And practice shooting while holding your flashlight!

2. Tactical reloading – Spend lots of time practicing reloading your weapon while under fire (pretend of course). Many department ranges have their officers fire until their magazines are empty and then remove them, hanging on to the spent magazine while replacing it with a fresh, full one. No! Officers should practice discarding the empty magazine. You do not want your hands full, trying to reload while bullets zip by your head. However, you should place the empty magazine in a place where it’s easily accessible for future reloading, if necessary.

3. Practice shooting while using various objects as cover. Then, you’ll do so in the field. Always use cover!

4. Officers should get into the habit of always facing their target (never turn your back on the shooter!). But, many departments have the officers first shoot from closer ranges (5 or 7 yards), and then when they’re finished at that distance they turn around and walk back to the next firing point. NO! They should back up to the next point. This gets them in the habit of facing their aggressor.

5. Strong and weak hand shooting. Always, always, always practice shooting with either hand. You never know when your strong hand may become injured. If it does, you certainly want to be able to at least hold, point, and shoot the firearm with some degree of accuracy.

7. Get some time on firearms training simulators, such as FATS. They’re great for preparing officers for real-life scenarios. They’re also great for pointing out your weaknesses in stressful situations. I’d rather correct my errors in a classroom, not after I’ve caught a couple of rounds to my torso. 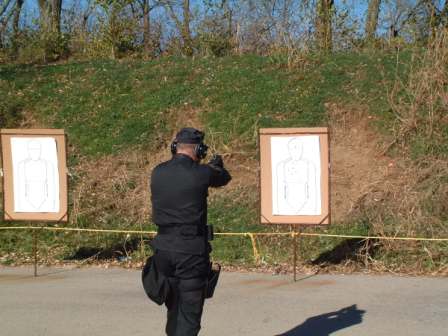 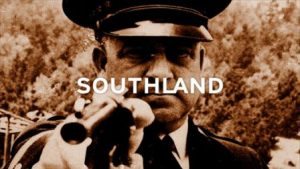 Congratulations to Michael, Ben, Shawn, Regina, Tommy and the rest of the crew at SouthLAnd. The show has been picked up by TNT for a 4th season! We’ll see you next year. Thank you guys, too, for supporting this blog and the Writers’ Police Academy.

The Secrets To Creating and Writing Compelling Villains
Scroll to top