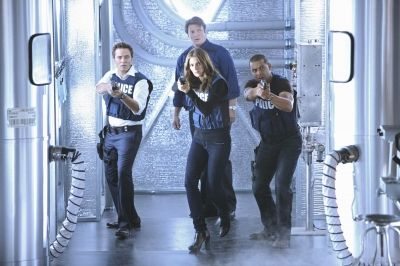 In last night’s episode of Castle, Richard Castle, the TV show’s amateur sleuth/novelist defined a serial killer as a murderer without motive. Therefore, he (Castle) felt the murderer in the show couldn’t be a serial killer since there was a motive for committing his crimes. Was his statement correct? I say no. Not by a long shot (pun intended).

Warning: This is a spoiler for those of you who haven’t seen the show!

“Cause or reason that moves the will and induces action.”

Dr. Katherine Ramsland, one the country’s leading experts on serial killers, defines a serial killer in her book, The Human Predator:

A serial killer murders at least two people in distinctly separate incidents, with a psychological rest period between, which could be considered a time of predatory preparation. He, she, or they also choose the murder activity, such as stabbing, strangulation, shooting, or bombing, and may move around to different places or lure successive victims to a single locale. They view victims as objects needed for their ultimate goals, and manifest as addictive quality to their behavior, so that choosing murder is a satisfying act rather than merely a reaction or instrumental goal.

Add the two definitions together and what do you get? You get Castle’s suspect, the serial-killing, greedy, revenge-driven, brother who murdered his sister (and two innocent people in order to cover his tracks) so he could claim the entire amount of his dying father’s assets.

Satisfying needs, such as revenge, money, sexual thrill, or even to meet the demands of various rituals, are all motives. And the killer Castle so comically chased down and caught definitely had a couple motives for committing his crimes.

So, what are your thoughts about the show? Did you enjoy it? I thought it was okay. Well, it wasn’t offensive.

Oh, the poker game was a nice touch.