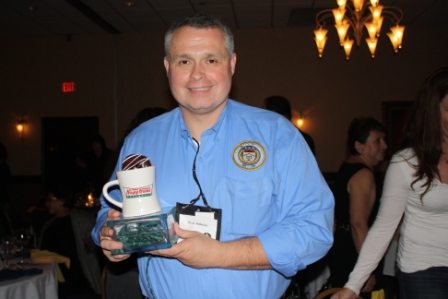 The winner of the Writers’ Police Academy 2010 Golden Donut Award was Richard McMahan. The rules of the contest were simple, but the task of writing it was a bit more challenging. The stories had to be exactly 200 words, including the title. Each entry had to be a complete story, and they had to be about the photo we posted.

We received dozens of entries and our judge, Hallie Ephron, picked McMahan’s story from the pile as the clear winner.

Thanks to everyone for entering and for supporting the GTCC criminal justice foundation. “Nine one one, what’s your emergency?” Janice asked as she glanced at the wall clock. Almost shift change. Thank goodness. The only decorations on the blank wall were a pair of uniform shirts tacked up on either side of the clock. A blue city police shirt and a tan sheriff’s one.

“Uh,” a woman’s voice said, bringing her back. No panic. “I’m not sure if this is an emergency.”

The computer said the call was from a cellphone.

“I’m near the wildlife preserve.” Janice knew the place. The county road was straight and flat with tall wetlands bending off to either side. Pretty in the day. Desolate at night.

“There’s a cop behind me with his blue lights on. Can you tell him I’m pulling into the park entrance where the lighting’s good”

“It’s good to be safe,” Janice replied.”I’ll advise the officer.” Scanning her monitor, she looked for the sheriff’s unit initiating the traffic stop in the county.

There was a sigh of relief across the line.”It’s okay,” the caller said, “He’s out of his car and I can see his blue uniform.”