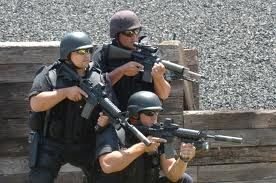 It was a warm summer day when a young man entered a drug store in Livingston, Tennessee and presented the pharmacist with a forged prescription for the powerful pain killer Oxycodone. The pharmacist examined the prescription through his wire-framed glasses and then gave the customer a curious glance. The man locked eyes with the druggist who was again studying the paper, flipping it over to scan the back. The man noticed yellowish nicotine stains on the pharmacist’s index and middle fingers. A heavy smoker.

“Did you write this yourself?” the pharmacist asked the man on the other side of the counter.

The nervous man looked over his shoulder to see if anyone was nearby. “Yes,” he said in a near whisper.

The pharmacist smiled. Smoker’s teeth. “Be right back,” he said.

The customer paced small circles on the well-worn tile in front of the counter while he waited. Sweat had begun to dot his forehead. Was he going to fill the prescription, or call the cops?

A few minutes later the pharmacist returned with a familiar amber-colored, white-topped bottle. He tucked the container into a small white paper bag. “That’ll be ten bucks,” he said to the man who promptly handed him a handful of crumbled bills. “TennCare’ll cover the rest. Thank God for insurance, huh?” The druggist’s lips split and a phlegm-filled chuckle came from deep inside his narrow chest. He pushed the bag toward the man.

The anxious customer grabbed the sack and turned toward the front door. He breathed a sigh of relief and walked out into the Tennessee sunshine. He climbed inside his old Dodge truck, tossed the package on the seat beside him, and then drove to meet Detective Brian Franklin, the investigator heading up the undercover operation focusing on Clark’s Medical Center Pharmacy and it’s owner/pharmacist Malcolm Douglas Clark.

The operation was officially underway. They had a case.

The above paragraphs are a fictional depiction of the drug transaction. However, the story is very true.

On February 19, 2010, Malcolm Douglas Clark entered a guilty plea to 6 felony counts stemming from a years-long investigation that involved undercover purchases by informants. In fact, Clark was indicted on over 300 counts of drug-related offenses that included sales of Oxycodone in a Drug-Free School Zone, obtaining Dihydrocodeinone by fraud, TennCare fraud (insurance fraud), theft of property valued at $10,000 or more but less than $60,000, and unlawfully dispensing morphine. He received 10 years probation in exchange for his guilty plea. He was also ordered to surrender his pharmacy license.

Thirty-five other individuals were also charged and convicted as a result of the investigation.

Clark was ordered to pay nearly $400,000 in restitution. Several firearms were seized during the raid on Clark’s business. Those items were surrendered to the Overton County Sheriff’s Office, the department that spearheaded the undercover operation. 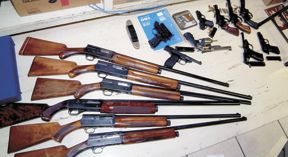 Also turned over to the sheriff’s office was the actual pharmacy and land where it sits.

Last week, after a very long investigation, Overton County Sheriff W.B. Melton was finally able to cut the ribbon on his department’s new annex. Clark’s old pharmacy will now house the very investigators that put an end to his illegal activities. 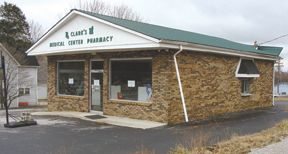 * Asset-forfeitures are common in drug investigations. It’s a fairly simple process where police agencies file paperwork with the courts to seize property used in connection with crimes, normally drug-related crimes. The property to be seized must be directly involved with the crime in question, and the property must be directly tied to the defendant in the criminal case.