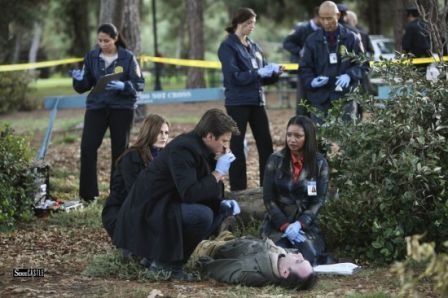 This week we followed Beckett and crew into a very odd plot that brought us to an ending that was even wackier than the story. The writer, Matt Pyken, a former D.C. speechwriter and campaign manager, must have been having flashbacks of writing National Lampoon material (Blind Date) when he sat down to scribble out this mess. Oops…I believe it’s appropriate to start with something good so I’ll say this…the show only lasted for one hour. Any longer and I’d have been digging in the medicine cabinet for something to take me out of my misery. Even the applause bears were fighting me for the remote. I heard the larger of the three say something about preferring to watch Gilligan’s Island reruns. 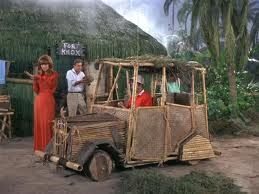 Anyway, let’s get on with the show. Of course we start out with the queen of Ouija board forensics, Lanie Parish, and a dead body in the park. (Reminder—this review is intended for writers. At the beginning of the first season several mystery authors asked me to point out the incorrect procedure on the show. Believe it or not, I actually like Castle). 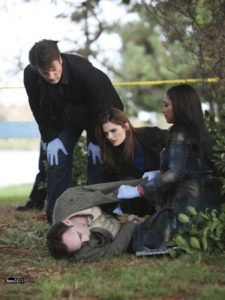 – Lanie “predicts” the cause of death – a gunshot wound to the chest and two to the back. Again, no way of knowing this for sure until autopsy. We learned later that the victim was shot while in a tree snapping photos of birds. The fall could have killed him. But this isn’t the worst of her babble. Not by any means. Oh, she did say, “I won’t know for sure until I get him back to the lab.” That was good. It meant that she needed to confirm the cause of death. BUT, how many M.E.’s say lab instead of morgue? Generally, M.E.’s and coroners don’t work in labs, right?

– At the scene Castle removed a feather from the victim’s clothing. That would be a NO in real life, especially for a civilian.

– What happened to the Lanie Parish of two weeks ago? At that time we saw a well-informed and believable M.E. who knew the difference between lividity and liver temps and rigor. This week Lanie combined lividity and body temp to determine time of death. Lividity cannot be used to accurately determine TOD.

– She looked at the bullet holes and determined that all three were made by .45 rounds. Can’t be done. You cannot look at a bullet hole in the flesh and accurately determine the bullet’s caliber. But, believe it or not, things got worse. Lanie claimed to measure the depth of the bullets (in the body) and then, using those depths, concluded how far away the shooter stood when he fired the three rounds. I’m still scratching my head over that one. This just may have been the most ridiculous thing she’s ever said. If the writer was going for comedy he certainly reached his goal. 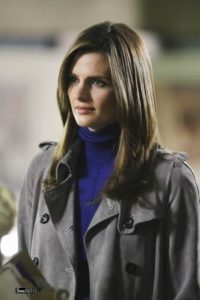 – Beckett commented that investigators should search for not only things at the scene but also what’s not there. Great line. Often it’s the one thing that’s missing from a murder scene that leads you to the killer.

– I’m still impressed with Ryan and Esposito. Those two characters have grown tremendously since the first episode. They play their parts well. And, they’ve developed individual personalities that stand out on the screen. Good cops.

– I was a bit confused about abduction of the child. First, it made no sense that it was a parental abduction, which is what the writer seemingly wanted us to think. And he did so by telling us and not showing it. The clues (if you can call them that) pointed to something else entirely.

– For me the story totally fell apart at this point. We’d watched the good guys get tunnel vision about the father as the kidnapper when they clearly had a photo of someone else taking the child. They also had a photo of the getaway car that didn’t belong to the father. The father was poor and certainly couldn’t afford to hire someone to take the kid. Besides, why would he have had to go through all that stuff just to abduct a kid who was already staying with him for the weekend. All he had to do was leave town with the boy.

– I was glad to see that Beckett didn’t call in the FBI. They don’t work all kidnappings.

– The surveillance vehicle was a nice touch. I’ve spent many hours sitting inside one while watching bad guys do what they do. The trucks look cool on TV but there are a few things they don’t show…like no bathroom and you can’t use the vehicle’s heat and a/c. An idling vehicle attracts attention.

For me, this episode lacked emotion, with the exception of Castle’s scenes with Alexis. 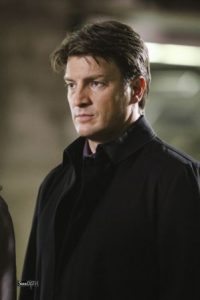 This episode also lacked tension and, quite frankly, it lacked a story. The bad guys did all they did just so they could ride an elevator to the top floor with a building maintenance guy? Come on…

Anyway, this is what I had to deal with when I refused to turn the channel at the halfway point.

The bears loudly voiced their anger over another disappointing week.

Pharmacy Seized and Forefeited In Drug Raid
Scroll to top