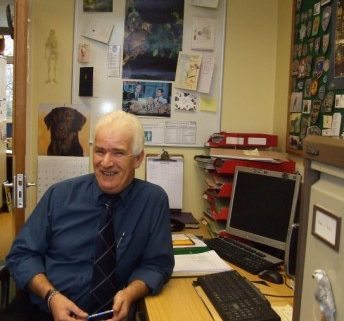 My friend, Paul Beecroft, has spent a good deal of his life in law enforcement, in England. He’s worked Foot Patrol, Area Car, Instant Response Car and also as a Police Motorcyclist. He’s currently a coroner’s investigator and has traveled all over England, Wales, Scotland and even Germany to investigate crimes.

Paul is an avid falconer, and he’s a darn good writer. Today he’s taken another page from one of his own notebooks to share with us. Please enjoy.

It was Boxing Day when I got the call from the Police Control Room asking that I attend the wooded area running alongside the River Thames and liaise with the Police following the discovery of a body. On arrival and after a ¾ mile walk along the towpath I arrived at the scene. There was a wooded area running down the right hand side between the towpath and a railway embankment. It was only some 30 feet in width but was not generally walked through by the public who remained on the towpath.

The body was that of a male, probably white, some 6 foot in height. He was on his back, his head clear of the ground as it was being supported by a length of cord still around the neck which in turn was tied to a branch of the nearby tree. The body had been there a long time. Unrecognisable from the person he had once been. The branch of the tree was bent through months of supporting the weight of the body. Initial thoughts were obviously death by Hanging.

Photos were taken for evidence. The cord was untied and the body rolled over. A half empty packet of cigarettes and a half empty bottle of water (confirmed later).

The body was then examined in detail. Hundreds of insects, beetles, worms. The maggots had gone but they had taken much during the summer months. Other animals had also removed various parts.

Loose change in pockets. Nothing else, absolutely nothing else.

A Post Mortem was carried out. The cause of death, although probably obvious could not be confirmed. Internally the body was empty. Time had taken its toll and internal organs had been eaten away. We guessed he had been dead for about 5 to 7 months.

Who was he? Checks were negative as the information available was insufficient. No persons were missing within our Police area that came close. Nationally it was impossible to tell.

A Forensic Odontologist examined the teeth. Nothing remarkable but he was of the opinion that the Dental work was probably done in the UK. Pictures were obtained and circulated via the Magazine of the British Dental Association but there was no result.

DNA was obtained. There were no hits even after checking for possible family members on the database.

The T Shirt, although degraded was just legible. It was an Olympics T Shirt for Swimming and dated two years prior. The town depicted was in the North of England. A copy was made and circulated in the area he was found. Enquiries in the North of England proved fruitless. Enquires with Olympic Management led us to a T Shirt distributor that had gone bankrupt and the owner having immigrated to Australia.

After three months we went back to the Post Mortem table. Could we find anything that would help? As it had not been a suspected Murder a full Forensic Examination had not been carried out but now it was needed. The Pathologist worked down the body but there was nothing of note. No visible fractures. Nothing. We then turned him over and started again. Down the back, along the spine and then, a glint, silver, at the bottom of the spine, built in. A Pedicle Screw had been fixed to the spine following what was obviously a Trauma injury. It was removed and examined. Under the magnifying glass numbers could be seen but were so small they could not be easily defined. We called the Medical Photographers in and they took a series of photos that clearly showed serial numbers and other numbers.

We were there. We could now find out who this person was. Manufacturers were contacted, emails were sent but nobody recognised the serial number. Contact was then made with every single Hospital in the UK that carried out Spinal Operations. Finally I had a hit. A Doctor contacted me believing it to be a patient he had operated on two years prior following a fall from a building. Details were obtained and the police visited his home address. He was at home, he was alive, it wasn’t him.

One morning, one of those mornings when it was quiet, normally rare, I made a phone call to the nearest manufacturer. I spoke with a lady, trying to establish where I could go next. During conversation she said, “remind me again, where are you”? “Reading”, I replied. “Are you anywhere near The Ramada Hotel”? “About 500 yards” I said. She then informed me that there was a conference in progress with Surgeons specialising in spinal surgery with Reps from companies from all over the world.

Within minutes I was walking into the foyer of the Ramada armed with photographs and copies to hand out. I arrived at exactly the right time as they were breaking for tea and coffee. I selected a likely looking man, introduced myself and explained the situation to him. The response was quite incredible. I was soon surrounded with people trying to help. Most spoke English but not all and translations were taking place. Doctors, Professors, other Medical Staff, Company Reps from all over the globe examined the photographs. It was soon established that his particular Pedicle Screw was not new. Estimates ranged from 10 to 15 years and my hopes were dashed when no one could recognise it. It was established that it was not likely to have been manufactured by the leading companies in the field and it was believed to have originated in Eastern Europe.

I had hit another dead end.

It was now July; nearly seven months had passed when the next phone call came in. During all this time I had been in constant touch with the Missing Persons Bureau who record details of all persons that are reported as being missing in the UK. They had a possible match. The team there had been doing follow up enquires with a family which is normal and during conversation it was mentioned that the missing person had some form of metal screws in their spine. The person in question had been missing nearly a year. The MPB had obtained details of his Dentist and his Doctor.

I phoned them both. His Dentist then checked the photographs in the Dental Magazine against his records. He thought it was a match but would like to see the original Dental Report before he committed himself. His Doctor confirmed a Pedicle Screw had been attached to his spine and that his full Medical Records relating to this were at the local Hospital.

The following day I drove 125 miles to my destination and met up with a local Police Officer. The person had been reported missing but the report made no mention of the spine injury or operation. We travelled to the Dental Surgery where it was confirmed immediately that it was the person in question.

Although it was not necessary we then went to the Hospital as the appointment was already arranged. They had been reluctant to divulge information on the phone. The Consultant was very helpful and produced X-rays which confirmed once again it was the same person. During conversation with the Consultant it was established that the operation had been carried out in France.

We then drove from the Hospital towards his home. He lived with his parents. The Officer with me, fairly young, said, “What are you going to say”. “I don’t know”, I replied, and I didn’t. Those that have given death messages to a family will know what I mean. You can form the words you are going to say in your mind but it never works that way. Each family is different, each family member is different.

I rang the doorbell. A lady in her late 20’s answered. She saw one Police Uniform and me in plain clothes. I was not expecting her. I asked some quick questions.

“No there at work, can I help, I’m their daughter”.

“I’m a Police Officer from the Thames Valley and my colleague here is a local Officer, can we come in a minute”.

“You’ve found him haven’t you?”

Phone calls to Parents……”Come home”, “Just come home, tell you when you get home”.

The news is broken, details explained.

‘John’ had been in hospital. A Mental illness. He had been getting better and had walked out of the Hospital to buy some cigarettes but never returned. For reasons we will never know, he caught a train to Reading and then must have gone for a walk. He went down to the River. A picturesque area that his family thought he would have liked and there he stayed.

He was injured years ago in France when he fell from a 3rd floor window and surgeons rebuilt his broken spine.

The T Shirt turned out to be unique. It had been made by ‘John’ and his brother in law.

From the day he went missing until the day I met with the family was exactly one year.

‘John’ was finally laid to rest a few days later.

We’ve received several emails asking us to extend the early registration date for the Writers’ Police Academy until after income tax and royalty checks arrive. We want to make this one of a kind event possible for everyone, so we’ve decided to honor those requests. We’ll announce the new deadline in a few days. Please take advantage of the low rate!

* Attention active-duty police officers. I need assistance with a bit of research. Sorry, I can’t divulge the subject matter in an open forum. Please contact me at lofland32@msn.com

Castle: The Double Down – A Review (of the police procedure)
Scroll to top