*This week’s show was a repeat of an earlier broadcast.

Let’s just skip the preliminary fluff and get down to business. After watching this episode I’m in no mood for making nice.

The title of this week’s episode is Double Down. Perhaps the network should have opted for calling it Double Trouble. We’ll get into the reasons why in a second. First, I have to say the comedic aspect of the show was in overdrive. I have to wonder, though, if they have a new writer because this episode was unlike any other. I’m not saying the show was better or worse than usual, just different. Maybe even a little odd. But it was what is was – a bit of a disappointment for me. (Remember, this is a repeat. Lately, the M.E. character has been pretty good. I’m really enjoying her new-found wit. I hope it lasts).

The Highs and Lows (Remember, this is a review of the police procedure and a little of the forensics, not the overall show. I’m a big fan of Castle and Beckett. Great chemistry. Even the supporting cast is pretty doggone good. Well, with the exception of one cast member who insists upon spouting off BS forensic material. Maybe she’s just reading her lines, I don’t know. But if I were her, I’d certainly want to at least be as good as everyone else on the show. I did read an interview where she stated the show has a medical examiner as a consultant, a real M.E. who offered to show her around a real morgue. She refused the offer, but who could blame her? I’ve attended many autopsies and not one has been a pleasant experience. Still, do they not listen to their experts? Anyway, here goes. Double Trouble…I mean Double Down.

– Castle mentions the craziness that comes with a full moon. Most cops, ER personnel, and other creatures who work the graveyard shift will nod their heads in agreement with that sentiment. Trouble follows a full moon, and weird calls normally come in during those times. Good stuff.

– The full moon scene was a little over the top, with cops wrestling crazies whose clothing seemed to come off quite easily during the commotion. At one point a new female detective, Roselyn Karpowski (she played a good part in this show), landed on Beckett’s desk, on top of a struggling suspect. While there she spoke to Beckett in a calm, easy tone. I know this was way over the top, but cops are so used to fighting, tussling, wrestling, handcuffing, Tasering, etc., that it is just a matter-of-fact occurrence to be in the middle of a big brawl. So good stuff, here. Take this one to the bank. Cops don’t get excited easily when faced with danger. After it’s over, maybe. But when it’s happening they’re right there, toe-to-toe with the best of them.

– The medical examiner working a homicide in a cocktail dress???? No way. Even if she didn’t have time to change she’d have put on a lab coat or other protective clothing. I should not have complimented her last week, because it all went downhill from this really low spot in her night. Geez… I actually felt bad for her. But, as they say on American Idol when the train wreck happens…She looked fantastic.

– Becket told the M.E. to check for fibers and hair. Hmm…I don’t know a single M.E. who’d have to be told that. Nor do I know one who’d take orders from a detective. However, I’m sure Beckett felt she needed to guide this one through the hoops.

– This isn’t procedure, but I had a nice chuckle when Castle said, “The person who killed her also killed the English language.” Those aren’t exactly his words, but you get the idea.

– There was a new coroner at one of the crime scenes. He was very believable, in this scene. But it didn’t last. More in a second.

– Loved the coroner’s “Looky-loo” comment. That’s a nickname used by cops for the people who find it entertaining to observe crime scenes, car accidents, and train wrecks. Again the coroner’s character is pretty good up to this point.

– The betting scenes in the show were very distracting for me. It was cute, but I think they went way overboard with it.

– Okay, here’s where I wanted to kick the TV screen, shout four letter words, and flush the remote down the toilet (after turning off the show).

The two pathologists, the M.E. and the coroner (I’m still not sure why they have one of each. Is it like that in NYC? Dr. Jonathan Hayes, are you out there?), made the announcement that they’d found a diatom on the victim’s bodies that was specific to a single body of water, but they didn’t know where that body of water was located. WHAT???

Hmm…If they knew the diatom could have come from only one place in the world then they must know where that place is. Otherwise, they’d found something, but don’t know where the heck it came from.

Where’s Charlie Brown when you need him? 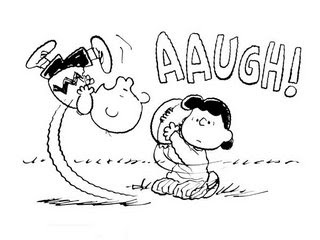 Wait, I think I know the name of the place. It’s called Conundrum. You know the place. It’s next to Missing, that mythical place where people go when no one can find them. Yeah, once you leave the Conundrum city limits, take a right, drive 6 miles, and you’re there. You’ll see the billboard as you approach. It reads,

People don’t GO missing, do they? You go to the store, you go to the movies, and you go bowling, right? But aren’t people you can’t kind simply missing? I mean, they aren’t just hanging out in some place called Missing that’s geographically located in the next county over from Purgatory. Or are they? Anyway, we’ve got bigger problems in this episode of Castle. Back to the diatoms…

Doggone it. You can’t discover something that’s only found in one place on earth if you haven’t discovered that place. It’s 2am right now and this crazy-making stuff is really frying my brain.

Oh, it gets worse.

– This started when the M.E. stated a forensic detail popped up during autopsy. That detail was locating the precious missing-link diatom (A cubic inch of diatomite contains millions of diatom fistulas. In other words, they’re pretty darn tiny. A really large one can be as big as a half-millimeter). To begin with, a medical examiner would have to be searching specifically for a diatom during autopsy to have found one, or even a hundred of them. This is not part of a normal autopsy. And so what if they did? What would that mean? That someone was near a river, the ocean, a pond, a mud puddle, damp places, or close to some soil? Yes, diatoms can be found in common soil!

Next, who would have identified this wacky organism in the morgue? Would the pathologist automatically know this as part of their medical training?

The medical examiner informs Beckett that the victims had to have come in direct contact with this one of kind water in order for the diatom to have been on the body. Triple hogwash! Water evaporates. How did she know where the diatom came from? How did she know it wasn’t transferred from another person, or in the mist in the air?  Man, I’m really aiming the remote at the toilet now. What, perhaps I shouldn’t do that. Might be a rare diatom in there.

Castle suggests the water came from an aquarium in the victim’s office. Okay, he’s a layperson feeding off the garbage being tossed to him by the “pros.” Now the coroner adds his two cents to this bizarre scene. He says the diatoms were dispersed into the room by the aquarium pump and anyone in the room would be contaminated with the little fellers. What? Is it like a rain forest in that office? Just shoot me with a water pistol filled with poisonous diatoms. Do it now! End this madness.

Back to the diatoms in a minute.

– Beckett and crew (By the way, the two detectives are much improved this season) pull into an alley to serve a search warrant. Good idea, but sliding patrol cars sideways into an alley with flashing red and blue lights isn’t a good way to sneak up on someone. The bad guys would probably toss the evidence before you could say “diatom.”

– During the car sliding/red and blue light fiasco a bunch of street kids are heard yelling Five-0. This is good. That’s what the real hoodlums say when cops roll into the hood. Sometimes you can even hear them whistling as a signal that cops are approaching – a guy on the first block whistles, then a guy on the next block hears it and relays the same whistle, and then the next guy down the line does the same, and so on.

– If the detective holding the shotgun in this scene had been forced to shoot during the raid, I don’t believe he’d have been able to hold on to his weapon. A shotgun has quite a bit of recoil, so it’s best to hold the butt of the gun against your shoulder when ready to fire. He was holding his shotgun like you see the SWAT guys or soldiers carry their automatic weapons. Different animals entirely. Author Melanie Atkins tells me that Esposito is a former soldier, which explains this scenario.

And now to wrap this up…

– Beckett and crew question the two murder suspects, separately (good), and trick the weaker of the two into confessing by saying the alpha crook squealed like a pig. It works like that in real life, too.

At least everyone looked really nice this week. And Castle was pretty funny.

We’ve received several emails asking us to extend the early registration date for the Writers’ Police Academy until after income tax and royalty checks arrive. We want to make this one of a kind event possible for everyone, so we’ve decided to honor those requests. We’ll announce the new deadline in a few days. Please take advantage of the low rate!

* Attention active-duty police officers. I need assistance with a bit of research. Sorry, I can’t divulge the subject matter in an open forum. Please contact me at lofland32@msn.com