October 28, 2011 – Officer Terry Lewis-Fleming was killed when her patrol car collided with another patrol vehicle during the high-speed pursuit of two armed robbers. After the collision her car left the roadway, struck a tree, and then burst into flames. 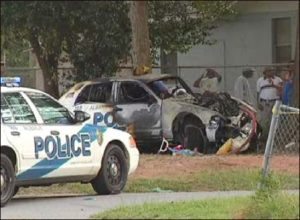 Officer Terry Lewis-Fleming is survived by her husband and three children.

October 29, 2011 – Officer Brad Jones was shot and killed while assisting a probation officer during a meeting with a parolee. When Officer Jones approached, the suspect pulled a gun and immediately opened fire, wounding the officer. The shooter then stole the officer’s patrol car, but crashed the police vehicle a few blocks away where he engaged other officers in a shootout. The suspect was critically wounded during the exchange of gunfire.

Officer Jones is survived by his wife and two children. 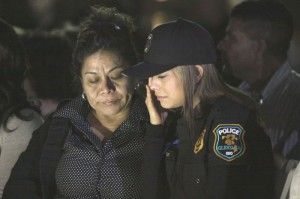 Cindy Jones, the fallen officer’s wife, is consoled by her mother during a candlelight vigil for her husband. – yourwestvalley.com photo