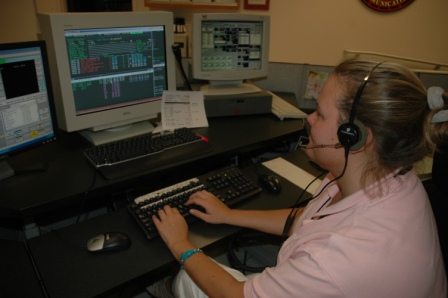 Imagine working an entire county alone, on the Graveyard Shift. It’s just you, your police car, and the few tools on your duty belt to keep dozens, maybe hundreds of square miles and thousands of sleeping citizens safe from who knows what. This is the fodder for the imaginations of writers like Stephen King and Dean Koontz. But this isn’t Odd Thomas or the misery inflicted on novelist Paul Sheldon by Annie Wilkes. No, this is real life. It’s police work that occurs all across the country, every night. And the best line of defense between you and death lies in the skills and knowledge of the person on the other end of your police radio, your dispatcher.

Police dispatchers are the first line of contact for people with emergencies. They also field calls from people who dial 911 because McDonald’s is out of McNuggets (true story!) It’s a dispatcher’s duty to gather and sort pertinent information and then relay that information to the officers on the street – information such as, whether or not a suspect is dangerous, or if there are weapons present at the residence where the officers are headed. This is really important stuff! In fact, having advance knowledge of the presence of weapons and other dangers – explosives, chemicals, biting animals, sink holes, traffic jams, bridges that are out, overflowing creeks and rivers – is top priority. It’s especially important for responding officers to know about the presence of weapons.

But what happens when a dispatcher fails to provide necessary information to the officers working the streets? Well, it seems that a Pittsburgh, Pa. dispatcher chose not to pass along information about weapons in a house where a domestic dispute was in progress. Her decision to withhold that piece of extremely vital information from the officers cost three of them their lives. Two others were wounded during the shooting.

“In this particular case, our call-taker did not follow through with the appropriate training that she had received and [make] the appropriate notation that there were weapons in the house.”

The bodies of the Pittsburgh police officers — Stephen Mayhle, Paul Sciullo III and Eric Kelly — are scheduled to lie in repose at Pittsburgh’s city-county building Wednesday before a public memorial is held Thursday.

Richard Poplawski, 22, is in custody in connection with the shootings.

He was hospitalized over the weekend after being shot in the leg during the gunbattle and standoff with police that lasted four hours.

Police have not disclosed where he is being held. They said he would be charged with three counts of homicide, aggravated assault and other charges.

Poplawski’s mother, Margaret, called 911 about 7 a.m. Saturday to report that her son was “giving her a hard time,” according to a criminal complaint filed in the case.

She told police she awoke to discover that “the dog had urinated on the floor” and awakened her son “to confront him about it,” and the two argued. Margaret Poplawski told her son that she was calling police to remove him from the home, the complaint said.

During that call, according to WTAE, the dispatcher asked Margaret Poplawski, “does he have any weapons or anything?” referring to her son.

The woman replied, “Yes.” She paused and then said, “they’re all legal.”

“OK, but he’s not threatening you with anything?” the dispatcher asked.

WTAE reported that Margaret Poplawski did not answer directly but said, “look, I’m just waking up from a sleep, and I want him gone.”

Full pointed out that the call was a “casual conversation” and that although “there’s no excuse for it whatsoever … gathering from the casual nature of the call, the call-taker took an inference that [the caller] was not threatened and that guns or weapons were not involved. And it never was relayed to the police officers.”

Authorities said the responding officers, Mayhle and Sciullo, were shot as they arrived at the home. Kelly was shot later as he arrived to help them.

Police believe that Poplawski, wearing a bulletproof vest, fired more than 100 rounds at officers with an AK-47, another rifle and a pistol, authorities said Saturday.

The dispatcher has been placed on paid administrative leave, Full said. “You can only imagine how fragile this individual is. This young lady came to work that day … she had no intentions on ever letting this go.”

“The woman is being assisted through the county’s employee assistance program,” he said.

Pittsburgh Mayor Luke Ravenstahl said in a statement that, although he has commended the county 911 center many times, Saturday’s events “revealed a flaw in the 911 system.”

“We now know that the 911 dispatcher was made aware that guns were present … and that this information was not communicated to the officers,” Ravenstahl said, according to WTAE. “Before responding to the call, the officers should have had the benefit of knowing that the actor owned firearms. We will never know if Saturday’s events would have gone differently had the officers known.”

Ravenstahl said he has asked the center’s management to develop a plan of action “to address flaws in the system and to ensure that this type of incident never happens again,” WTAE reported.

* You can find me over at Mysterious People today where I’m being interrogated by Jean Henry Mead.