Police officers have one of the highest suicide rate in the country. The number of divorced officers is staggering – possibly the second highest divorce rate overall. Cops are second when it comes to problem drinking.  A law enforcement career is the most stressful career in the United States according to Hans Selye, the leading researcher in stress in the world.

What is it about police work that’s so unique? Chronic stress seems to be a major culprit, because, like anything else in excess, the body becomes used to it, building a sort of tolerance which can cause the officer to regress. This regression causes the officer to become more childish and immature. Spouses often report that their officer husband or wife becomes more self-centered, irritable, and even whiny, like a spoiled child. These are all signs of repressed stress in a police officer.

Chronic stress also causes officers to become insensitive. They’ve grown tired of seeing other people hurt, so they begin to stop feeling, or caring, about other people. In fact, they may even begin to care less about hurting other people, and do, without remorse. 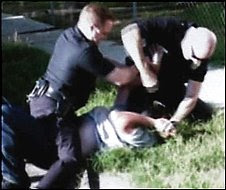 Repeatedly answering stressful calls, day in and day out, one after another, wears on an officers strength – their ability to remain strong in high-tension situations. This loss of mental strength can make an officer much more vulnerable to even the normal pressures of life – a sick child, bills, etc. Police officers are in a constant Catch-22, a damned if you do, damned if you don’t, world. They’re expected to make split-second, life-changing decisions (and I mean that literally), but at the same time they’re forced with the worry of being disciplined for that very action. And they must also fear public reaction to their decisions, which could also lead to career-ending civil actions where the officer loses everything.

All this for a whopping $40,000 or so per year. Well, unless you’re in Boston where it’s been reported that, with overtime, some officers rake in approximately $200,000 each year.

Have you seen signs of stress in a police officer? If so, what?

Followon TwitterSubscribeto RSS Feed
Dispatchers: An Officer’s Life Is In Their Hands