Last night’s episode was a hot one to say the least. And Castle fans everywhere needed the heat, especially after waiting weeks for their favorite crime-solving duo to return to the TV screen. Well, that and the fact that last night brought record-breaking cold temperatures to many areas across the country.

So let’s see what Good Cop Melanie has to say about the show.

Wow. What an emotional return for Castle after their holiday hiatus! I’ll let Lee handle the case, and I’ll tackle the emotion bubbling from all of the major characters. Fear, anguish, pain, dread, sick inevitability, and finally… disbelief and joy.

Of course, Ryan and Esposito walking out of such a terrible fire, even with help, would be highly unlikely in real life, but I cheered when they did. I cheered again when Kevin met his daughter for the first time, even though I didn’t really buy Jenny’s labor. She didn’t seem physically distressed at all. The episode had its faults, to be sure, but Andrew Marlowe and company still took us on a great, suspenseful ride. I could feel the heat from the fire, and every time the building groaned, I gasped. Those scenes were so well done.

The emotion portrayed by Rick and Kate, once they learned Kevin and Javi were trapped inside the building, had me riveted. Heck, when Jenny was in the ambulance about to have the baby and Kate handed her the phone, I held my breath. Then she talked to Kevin, and I lost it. Talk about a tear jerking scene… I needed a tissue for that one.

Lanie ran straight to Javi when she jumped out of the ambulance, and her reaction didn’t surprise me one bit. Those two still have feelings for each other, no matter how much they try to deny it. I wouldn’t be surprised if we didn’t see more of their relationship in the future.

As for our dynamic duo… I was disappointed when Rick abandoned Kate inside the groaning, burned out building in the middle of the episode. She seemed surprised, too, and turned to Kevin after Rick disappeared with her eyebrows raised. “And I’m marrying him?” Shame on Rick. After all they’ve been through together, all of their close calls and vows of always, he leaves her behind? Not funny, and out of character at this point in this relationship.

I did love the way they supported each other at the fire scene. Rick was by Kate’s side the entire time, except when he was attempting to find another way into the building. He loves her, that much is clear, and the high emotion between Jenny and Kevin obviously got to him. And when Kevin met Sarah Grace and we got to see her little face… Rick and Kate grinned with joy, too. Beautiful. I loved it.

Great episode. Can’t wait for the next one!

First order of business is to get Lanie out of the way so we can move on to something semi-realistic. She’s standing over a burned-to-the-crisp dead body and, in response to Beckett’s inquiry about the small, round hole in the victim’s head, she says, “It’s a GSW (gunshot wound). Probably a nine (meaning 9mm).”

Well, Ms. Lanie P., you cannot tell the caliber based on the size of a bullet wound. Trajectory can make a difference in the size hole a bullet makes, and, well, there are many other factors that can and do impact the size and shape of bullet wounds. So, writers, please don’t make that mistake in your writing. If the M.E. absolutely must say something about the wound, it’s best to have your M.E. say something simple, like, “I can let you know more about the round after I get the body back to the morgue.” 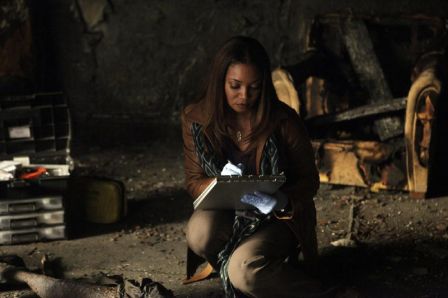 On the other side of the coin, Lanie came through just fine with her comment about the victim being dead prior to the fire due to his having no smoke damage in the lungs. All-in-all, she was 50/50 this week. But she was dressed nicely and looking good while examining the body inside the burned building.

FYI – It’s a good idea to wear some sort of protective outer clothing (coveralls, etc.) when working inside a burn scene. They’re extremely messy and it’s difficult to remove the black residue from clothing. And the scent stays in your hair and on your skin until you’re able to scrub it away in the shower, if then.

By the way, did anyone notice the resemblance between the victim in this episode and the burn victim at the Writers’ Police Academy? I’m pretty sure they’re closely related. 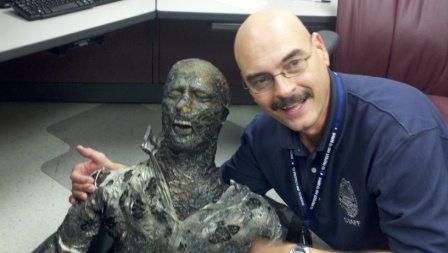 The mannequins used at the WPA are manufactured by the same people who make the ones used on TV shows, such as CSI and, apparently, Castle.

The actor who played arsonist Adam Ferguson did a great job of portraying “creepy.” I’ve arrested a few arsonists over the years and they’re often a different breed of criminal. They do indeed like to watch their “work” go up in flames. And, they’re often just a bit on the unusual side, leaning toward creepy.

Esposito and Ryan used a Slim Jim to break into the murder victim’s car, searching for clues and evidence. Slim Jims are flat pieces of metal with strategically placed cut-outs designed to hook onto and release locking mechanisms when the device is inserted inside a car door. 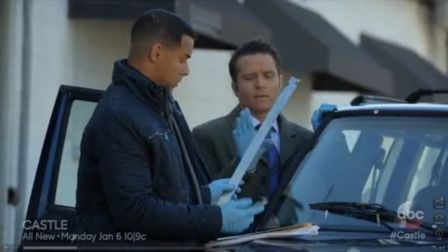 Slim Jims are more effective on older model vehicles, since most modern car doors unlock electronically. Still, a person with lots of practice and skill can use a Slim Jim to gain entry to almost any car. 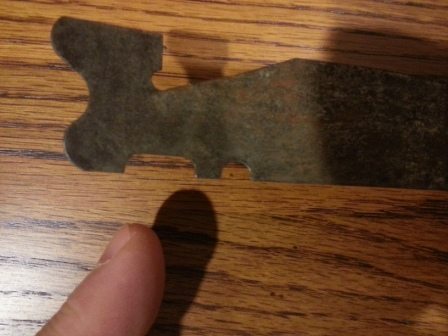 In the old days we all carried a Slim Jim in our patrol cars, and we unlocked several cars each week for the unfortunate folks who’d locked their keys inside their cars. Then, when cars moved away from the manual locks to electric, the risk of damaging electrical systems caused most police agencies to abandon the service. Well, that and the number of officers who managed to get the devices firmly stuck inside car doors.

By the way, carrying a Slim Jim around in your car, along with a screwdriver or two could be considered as “possession of burglary tools.”

Finally, people who’ve nearly met the Grim Reaper due to smoke inhalation and heat from an intense fire usually require a bit of medical attention, including a puff or two of oxygen. No amount of hugs and “goo-goo eyes” will provide an instant recovery, as we saw at the end of the episode last night. Still, the final scene was an appropriate ending for the show.

All-in-all, this was one of the better of the season. It was indeed, a hot one…