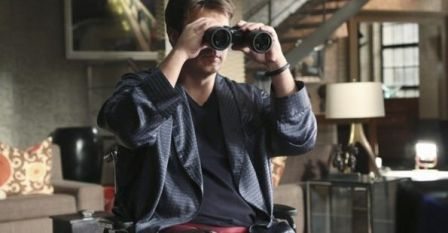 Well, better late than never. I had eye surgery this morning so my portion was dictated to my most helpful wife. First up, Melanie.

Tonight’s offering was Castle’s 100th episode. Mega congrats to the cast and crew for five years of excellent comedy, drama, mystery, police procedure, and romance. Andrew Marlowe and his wife, Teri Edda Miller, wrote this one… and they outdid themselves.

Talk about classic Castle… IMHO, the show deserves an A+ all the way around. Such great comedy, an unusual case involving an IRS agent, another clever mystery ala “Rear Window” courtesy of Castle, and so many great Caskett moments I couldn’t keep up. Lots of Easter Eggs for fans, too, including Rick’s model helicopter and the magnifying glass. So funny!

I loved that Kate was staying with Rick and taking care of him after he broke his knee cap in a skiing accident. Leave it to him to show off and hurt himself in spectacular fashion. So now he’s stuck at the loft, unable to work cases with Kate and the boys and too loopy from pain meds to write, and he’s extremely bored. Alexis bought him some binoculars as a joke, and after he breaks his helicopter, he picks them up and scopes out the building across the street.

Did you catch the Andrew Marlowe/Terri Edda Miller cameo? Terri is sitting in front of a typewriter in one of the apartments, and Andrew is standing beside her. Castle studies them and says, “Huh. Must be writers.” Priceless!

Rick sees a “murder” happen, but no one believes him. Not even Kate. Sure, she follows up on his claim, but then one of the boys talks to the supposed victim. Everything checks out, and apparently no crime has been committed. The woman is still very much alive.

Rick, of course, doesn’t believe Kate, especially after he sees the buy dragging a rolled up rug out of his apartment at three a.m. Was that how the guy disposed of the body? Rick soon involves Alexis in the mystery and gets her to help him break into the apartment in search of evidence — while he’s on crutches, no less. Not the smartest thing Rick Castle has ever done, but it is a very “Castle” thing to do, right? He spots paint, bleach, and blood spatter inside the other apartment, and then falls and has to hide under the bed to keep from getting caught. So funny. He was like a turtle caught on its shell.

Finally, Rick gets out of there without the apartment’s owner being the wiser and returns to the loft with bags from the guy’s shredder. A wrinkled invoice gives him the name of a storage facility, and he convinces Kate to go with him to look for the body. It has to be there, along with bags the murderer took out of his place, right?

No body, no bloody clothes, no bleach soaked rags. And to top it off, a security officer catches them inside the storage unit and calls Captain Gates. She’s furious. She reams out both of them and sends Castle packing. Esposito spouted off my favorite line: “Hey, Castle. Is it hard to balance on those crutches when you’ve just had your ass chewed off?”

They weave Castle’s case with the IRS case, and then give us a fabulous Caskett scene. Rick apologizes, and then Kate says, “You know what, Castle? It’s okay. Your overactive imagination has actually brought a lot of people to justice. In fact, it’s one of the things that I love about you.” Not quite an ILY, but it was oh, so close. Squee!

They’re about to go out for dinner for his birthday when she asks him if he’d like a drink from the ‘frig first… and that sets him off again. He remembers seeing refrigerator trays in the closet in the other apartment where he found the bleach and paint. Kate gets angry and storms across the strett to check it out and shut him up so they can go celebrate. Only… bam, said the lady. She tangles with the supposed murderer… and the lights go out. That really scares Rick. He thinks Kate is truly in danger, and he calls for help, then rushes over there to help her.

The whole thing is staged. The murder, the missing body, everything. Alexis, Gates, Esposito, and Ryan knew. Even Martha is in on it; she provided actors from her acting school. What an amazing twist! I never saw it coming. Kate couldn’t have given Rick a better gift than a mystery for him to unravel. He’s so good at building theory, she had to know he’d stick with it until he solved it. And for a minute or two after Rick got over there and they all yelled, “Surprise!”, I thought he was really, really angry with her.

Except… he loved it. And we got another spectacular Caskett moment complete with a couple of delightful kisses. One of Rick’s comments even helped Kate solve the case involving the murdered IRS agent, too. So classic.

Then we get yet another wonderful moment between Rick and Kate… and he rolls her off to the bedroom via his wheelchair. I loved this episode. I’m sure I’ll rewatch it many, many times. Thank you, cast and crew, for my new favorite of all time.

And next week, we get a crime involving Bigfoot. Really? Hahaha! Rick Castle in camouflage. That one looks funny, too. Can’t wait!

Well, here I am fresh out of eye surgery that began at 6:15 this morning. My vision is not so hot right now (I have this page blown up to a size where there’s practically only one or two words on the screen), so my portion of this review will be extremely brief, starting, of course, with Lanie, who slipped a bit back into her old ways.

The scene where she described the dead woman’s injuries was only at a level of “so-so,” but I was thinking I could live with it until she said, “The ‘pattering’ indicated that the victim was struck with that bat.” Now, I don’t know about you, but I don’t have a clue what pattering is. I even rewound over and over to listen to her words time and time again to be sure I heard her correctly. Anyway, I’ll file this one in the “G” drawer along with the rest of her goofy folders.

– The crew showed up at the IRS office and demanded to see the past year’s audit files…all of them. And they took them back to their office. No way the IRS is handing anything over to a couple of cops who show up without a warrant in hand.

– Beckett instructed Esposito and Ryan to hit the streets and “pick up” a suspect (the husband of the victim). In the event detectives show up at your door and say, “My boss says to bring you in,” please remember that they cannot force you to go anywhere without a warrant. You don’t even have to let them inside your charming little abode. On the other hand, if they produce the proper papers, well, it’s time to say goodbye to your cat and hope your neighbor will feed the fish for five to ten years.

– Castle convinced Beckett to allow him to break into a storage building. She reminded him that to do so would be illegal. He then said to her, “When you do it (break in) it’s an illegal search. When I do it it’s just illegal.” Not so. Castle is acting as an agent of the police, therefore, it’s still an illegal search and would not stand up in court. It’s also a criminal act.

– Is it just me, or does Gates remind anyone else of the Grinch?

– Once again, the killer was predictable—someone we saw briefly at the beginning of the show.

– If everyone at the police department was involved in the birthday surprise, why, then, were all references made as if Ryan and Esposito were not aware of the plan.

Finally, my favorite line from the show was delivered by Castle. “Someone’s got some ‘splainin’ to do.”

The "Eyes" Have It: Well, They Used To Have It
Scroll to top