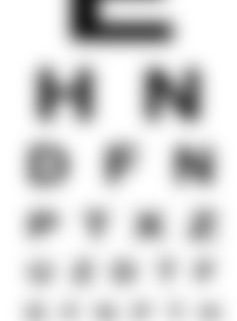 I had eye surgery yesterday, and I went into the operating room able to see out of my right eye. Sure, my vision wasn’t the best in the world, but I could see. Still, the operation was a necessary evil. I had no real options.

Today, the eyesight is far worse than before the operation, and the surgeon is stumped. He doesn’t have a clue why blisters have formed on the surface of the eye, reducing my eyesight to mostly blurs and fuzzy images. Also, the pressure in my eye was dangerously high post surgery, but as of this morning it was back within a normal range. Still, my vision is horrible.

Normally, this probably wouldn’t be a big deal because a person could function with one good eye until the bad one healed. I’m not that fortunate, though.

You see, several years ago I responded to a domestic call where a man had beaten his wife quite badly. Well, I arrived and set about the task of arresting the drug-fueled behemoth. We went at it, toe-to-toe and blow-to-blow, until I finally got him on the ground in a prone position with his hands behind his back. I’d snapped one cuff in place and was about to apply the other when the wife-beater’s brother came up from behind and struck me on the side of my head and forehead with a piece of 2×4. I never saw it coming. In fact, the next thing I remembered was waking up in the hospital ER.

Co-workers told me that when they arrived (someone dialed 911 to say I was in trouble) I was unconscious, but had somehow managed to handcuff both men before passing out. I don’t remember anything about it, though. A witness told investigators that after I was struck I stood up and suddenly turned into a wild man, fighting both men at once. In short order, I’d pounded them into submission, at which time I cuffed them both. Then, according to the witness, I collapsed as if someone had flipped a switch, shutting me down.

Anyway, as a result of my injury, I lost most of the vision of my left eye. The 90% vision loss was permanent.

So, as a result of that incident and the trouble from yesterday’s surgery, I’m pretty much left feeling my way around. To type this piece I’ve had to enlarge the page until there are only a few giant blurry words visible on the screen.

Hopefully, the doctor can get a handle on the troubles and I’ll soon be back to normal.

Until then, my blog posts may be sporadic. I will, however, post a review of Southland tomorrow. It’ll be a little later than normal, but I’ll see that it’s there at some point in the day.

For now, though, I’m going to take a break from the computer.

“See” you all later.