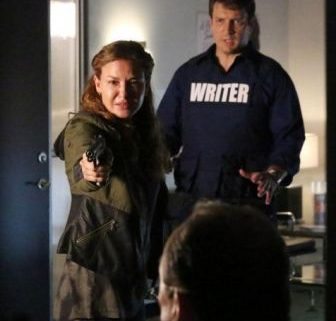 It’s time for Pi to go, and he should take goofy, sloppy, Three-Stoogish Detective Sully with him. The two add nothing to the show except a huge portion of “silly.” They don’t fit in. In fact, they’re a distraction and their antics are borderline slapstick. Right now they serve only to remind us that, until this episode, the season has been a nightmare. A mess. A real mess.

I’m thinking both Pi and Sully must be related to a network executive, or they’re the nephews of a top sponsor. Still, in spite of Pi and the Columbo wannabe, well, Castle was back, finally. And I think it’s a safe bet that Melanie loved this one. Let’s see what she has to say.

Wow. What a difference a week makes! I loved this episode of Castle, and after the last one… well, let’s just say this one was a vast improvement. This week’s show clicked for me from the word go, even with the weird scene in Rick’s bedroom where Pi walks in on Rick and Kate while wearing only a towel. Yes, I’m ready for Pi to disappear — and I needed some brain bleach after witnessing that little scene. He has a lot of nerve just walking in like that, but at least he didn’t reappear in the episode.

Of course, Martha swooped into the bedroom right after Pi did, wearing some strange bright blue get up complete with a matching head band, and Alexis soon joined the party. She’s not acting like herself, and I don’t blame Kate for pulling the covers over her head. The beginning of the scene did serve to ground us as to Kate’s job situation — or rather, her lack of a job — however, and let us know how frustrated she is because she’s not working.

No matter how unrealistic Gates and the hostage negotiating team allowing Kate and Rick full access to the case might be, I loved that the kidnapper would only talk to Rick. She was his number one fan. Of course, in real life, the cops were never allow a civilian to go in and negotiate, but I was able to suspend my disbelief and buy into the plot line. I loved it. The story moved along swiftly and I got so wrapped up, I forgot to take notes.

They got me this time, because I thought the annoying hostage was somehow involved in Emma’s plot. I never suspected the lawyer/son-in-law, although I did at one point suspect a brother or sister Emma didn’t know about… and I guess that did happen, in a roundabout way. Great job, writers! Such a seamless, fast-moving episode.

The way they had Kate reclaim her badge worked for me, too. I had half-expected her to talk to Gates and have to do no more than re-qualify at the range in order to be re-instated, and I was happy they threw some temporary roadblocks in her path. Of course, they disappeared by the end of the episode, but she didn’t just waltz in and go to work her first day back in the city.

Her fellow detectives’ reaction when she did get her badge back, the clapping and whooping and hollering, made me smile… as did the kiss she and Rick laid on each other once Kate gave him the okay for the workplace show of affection.

All in all, this was one of the best Castle episodes I’ve seen in a while. Bring on the next one!

I want to once again explain why I pick apart the police and forensics aspect of Castle, so here goes (this is mainly for the diehard Castle fans who frequent forums, posting messages that clearly show a misunderstanding of the purpose of these blog posts). Anyway, it was near the beginning of season one when group of writers contacted me and asked if I’d watch this really cool show about a mystery writer who tagged along with a police detective. They said the show was definitely a winner, however, the writers were a bit skeptical about the police procedure featured on the show. They were concerned that what they’d seen wouldn’t happen in real life and they feared making the same mistakes in their books (TV viewers, for some reason, are far more forgiving than readers for extreme stretching of reality).

So, this review of the police procedure was born. Melanie joined a couple of seasons later to offer her take of the Castle/Beckett relationship aspect. To answer the question I see quite often…yes, I do enjoy the show (most of the time). So there you have it, loyal and dedicated fans of the show. Now for the dissection.

There’s plenty to pick apart this week, but I’ll stick with the major points. And, a perfect place to start is at the beginning, where we saw two police officers pounding on a door, yelling for someone to let them inside. They beat and banged and huffed and puffed until they were finally able to break through the entrance. Well, we all know that one swift kick of Beckett’s high heels would’ve blasted that door into splinters (perhaps all members of entry teams should be issued a pair of Beckett-heels for conducting building entries). Apparently these two cops didn’t have the “Beckett-touch.” They also didn’t have any common sense, because they allowed a potential murderer to escape, and neither of the two went after her.

The officer who leaned out of the window, watching the Emma make her escape…well, let’s just say it’s a good thing I wasn’t there on the scene because I just might’ve pushed his lazy butt out onto the fire escape. One officer should’ve remained on the scene while the other pursued the suspect to the far corners of the earth if that’s what it took to catch her. The situation was made worse when the bicycle patrol officer couldn’t pedal fast enough to catch the fleeing suspect. Maybe Emma should try out for the next summer Olympic team. I believe anyone who can outrun a bicycle could give Usain Bolt a run for his money.

So, Emma escapes capture by ducking into a dentist office where she takes everyone hostage—the dentist, a receptionist, and a few patients (what, this dentist works alone without dental assistants and a hygienist?). Anyway, Emma demands to speak to her favorite author, Richard Castle. Here’s where fiction begins to trump reality. Remember, though, believable make-believe is the goal, and I think the writers pulled it off this time.

– Castle “goes in” to speak with Emma and he convinces her to release two hostages, which is a goal of all negotiators. You all know that in real life the police would never agree to allow a citizen to go inside with a person they believe is a murderer who’s holding hostages, right? But the way this played out on screen was believable in a fiction sort of way.

– Did anyone notice how quickly the police obtained enlarged copies of the hostages’ DMV photos? Did you also wonder how they knew the names of the patients who were inside the dental office? That was a great magic trick. I wish I’d had that ability (to see through walls) when I was a detective.

– I don’t believe there was any body armor/Kevlar inside Castle’s blue vest carrier (the cloth covering that’s designed to house the Kevlar panels). Had there been, Castle might have had the same level of confidence in its stopping power as did Sgt. John Howsden (ret.) of California of his own vest. – Beckett dives into the investigation as a civilian. I could sort of see this happening in real life…had she not been fired from her job as a federal law enforcement officer. She was canned for releasing information to the press—information that ruined a CIA investigation regarding spies and gun trafficking. She committed a criminal offense that’s punishable by numerous years in a federal penitentiary. A defense attorney would have a field day with that information. Beckett’s credibility would be toast. And to have her handling crime scene evidence, such as her flipping through the suspect’s cell phone files, well, the police and prosecution could kiss this case goodbye.

– Castle noticing the differences in the “voice” in Emma’s texts was totally believable/something real-life detectives would hopefully see, as well.

– Once again, we saw a detective (Ryan, I believe) make a few computer keystrokes (seven to be exact) to instantly see that someone had opened a sealed juvenile record three days earlier. Later, though, the writers made an effort to tell us that the file had been flagged (to alert someone that the file had been breached). Doing so made the scenario believable. Good for them.

– The politics involving the police commissioner and the politician/Emma’s father was you’d-better-believe-it realistic. More than one or two political strings have been pulled on the golf course (the sheriff I once worked for carried a set of golf clubs in the trunk of his police car).

So, there you have it. A decent episode of Castle…finally! Even Lanie didn’t upset the applecart this week. Of course, she didn’t have anything “forensic” to say, either.

Will it last? We can only hope so.

And Pi’s got to go! Maybe if we say it over and over again he’ll disappear. It’s worth a try, right?

Locked Up In America
Scroll to top