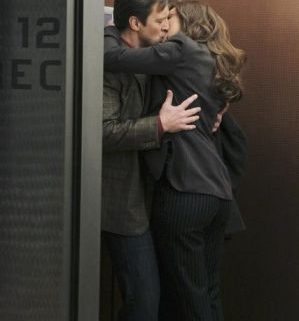 Castle’s book “Heat Wave” is making its way to the big screen. Yep, Nikki Heat is finally coming to life and she’s as hot as a two-dollar pistol (one of my former captain’s favorite expressions to describe a super attractive woman). And the steamy actress who landed the role, Natalie Rhodes, sets out on a research trip that includes slipping between the sheets with Nikki’s real-life flame, Rick Castle. 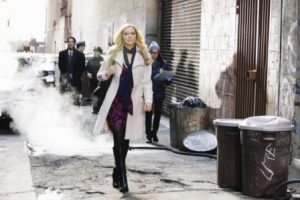 Natalie Rode-Hard-And-Put-Up-Wet. That’s probably one of the more polite AKA’s that Beckett assigned to the pretend Nikki Heat when she started to move in on Beckett’s personal space. And it’s no secret to Castle fans that Beckett’s personal space includes a certain mystery writer who so obviously took great pleasure in being the third party of a sexy, ménage à trois-ish team of investigators.

Actually, ménage à twisted is a good description of the storyline in this all new episode of Castle. Writer David Grae used a really sharp pencil when he set this story to page and it was nicely done. The one liners were nicely barbed and nicely placed and spaced.

There wasn’t much to pick apart along the lines of police procedure, and the forensics were pretty straightforward. And…we were spared of any nonsensical medical examiner mumbo-jumbo. How many of you missed the M.E. this week? Wait, let me rephrase the question because we may have missed seeing Tamala Jones on the screen. After all, she is a little easy on the eyes (another of my former captain’s expressions for describing a nice-looking female).

Now, how many of you missed the horrible information supplied by the M.E. character? I know I didn’t. Besides, what normally would have taken Lanie ten minutes and three gazes into her crystal ball, Beckett summed up in one sentence. “M.E. says the time of death was between 10 and 11.” That’s it, and that line tells us all we need to know. And it’s believable and it’s solid. Unlike what we usually hear from the M.E. on this show…”Due to the rust formation on the side of a blue hatchet that’s wrapped in a triangular and red banana peel, I’d say she’s been dead for six days, two hours, and fourteen minutes. And, since the shoe is green and missing a lace, I’d say the shooter stood fifty-two feet away when he fired the weapon, bouncing the bullet off the light switch before it struck the heart. Oh, and I found a perfect fingerprint on the victim’s spleen. I matched it to her boyfriend’s sister’s husband’s third cousin while I was conducting the autopsy, analyzing the blood samples, and doing my nails.” Sorry Tamala, but your character is simply dead weight on this show. You should be the district attorney, instead.

Okay, on with the police stuff… 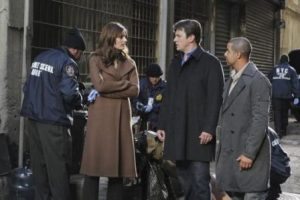 – Beckett mentions that the first 48 hours of an investigation are very important because the longer a case remains unsolved evidence can be lost, destroyed, or compromised. And witnesses tend to forget what they saw. Or they become confused about what they saw. Good information.

– Beckett said, “If you talk to enough people something usually shakes out.” Very true. Most crimes are solved by talking to people. Not by locating DNA, fingerprints, and other forensic evidence.

– Natalie told Beckett that wearing heels gave her an advantage/superiority over the men in the department because it made them look up to her. Correct, and it’s also true for male officers who wear tactical boots. They often feel taller and tougher. (More on this later this week).

– This was odd. Beckett, while talking to the P.I., said, “You called Stacy 20 minutes before she was killed. What was that about?” The P.I. answered her question without so much as batting an eyelash. But there was no lead in. No discussion about the murder. Nothing. So how did he know which conversation she was talking about, and when he had it? This was a slight goof in the writing. No big deal, but odd. In real life that could have been a trick question to see if the real killer slipped up when responding.

– The big problem (in real life, not on this fictional show) with the police aspect of this episode is that Beckett confronted the murderer with two civilians in tow. That would be an extremely dangerous thing to do in the real world, because not only would she have to worry about protecting her own butt, she’d have to look out for the two goofballs with her.

Enough police talk. This episode was fun. Castle was wound up and Natalie and Beckett did the winding. And Beckett…well, the picture says it all. She was hilarious, and jealous. 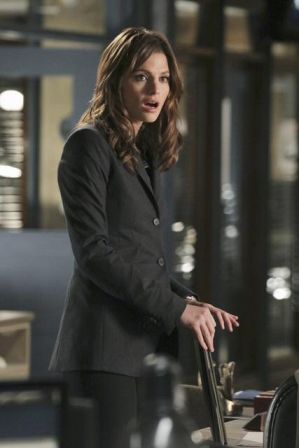 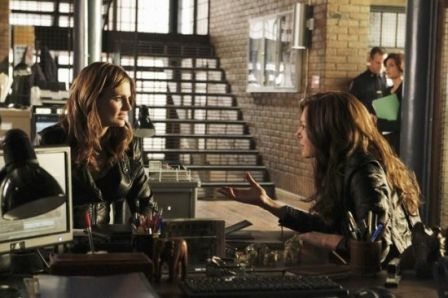 Laura Prepon (That 70’s Show) played a great part, and she was a pretty good Beckett impersonator, too. 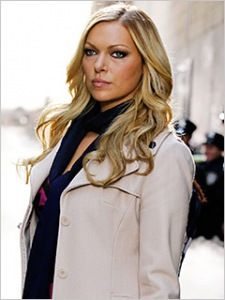 Natalie’s comment, “Audiences love what’s real…less is more,” rings true in books as well. Readers love what’s real. But don’t fill your pages with information overloads. Less is more. The M.E. character on this show is a perfect example of this. She fills our ears with too much incorrect babble, when Beckett can tell us the correct information with fewer words. Less is indeed more. 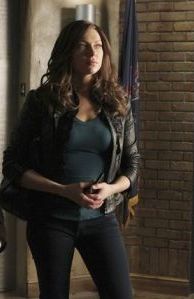 My favorite line of the week was when Esposito asked the guys what they were doing and Ryan responded with, “Hiding from Creepy Beckett.” 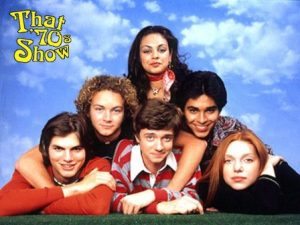 I’d say Laura Prepon has come a long way from That 70’s Show. Will we see more of her?

Overall, a good show this week. So good that I forgot there was a murder to solve. 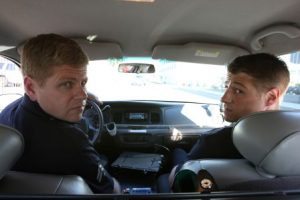 Don’t forget, the new season of SouthLand starts tonight on TNT. Let’s all support our good friend Michael Cudlitz and the rest of the cast by watching. It’s one of the most realistic cop shows on TV. I’ll be reviewing the show again this year. My first of the season will be tomorrow. 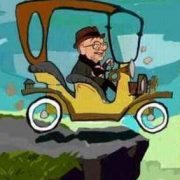 * I’m traveling today so I won’t be able to respond to comments and questions until later in the afternoon. However, I will be checking in throughout the day.

Southland: Let It Snow – A Review
Scroll to top