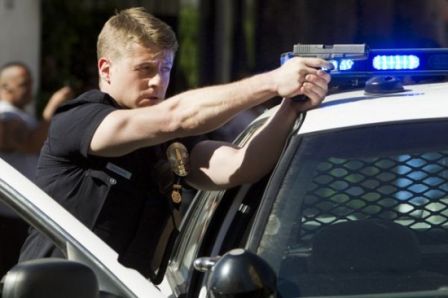 Well, for months we waited to see the SouthLand officers hit the streets of L.A. again, and did they ever hit the ground running, literally.  I had high expectations for this third season and once again, creator/writer Ann Biderman delivered the goods. Of course, the cast, crew, and other pros associated with the show all pulled their weight, and then some. The season opener was superb. A cut far above all other cop shows.

I like this show for several reasons. One…they get it right. Two…I’ve had the pleasure of being in contact with Michael Cudlitz (John Cooper) for quite a while and he’s the real deal. In fact, Michael called me last summer—it was a rainy Saturday afternoon—, and after chatting for just a few minutes I sensed that he’s a hard worker who’s extremely dedicated to his craft, the show, and to his fans. But what impressed me most about Michael is his desire to portray  real-life police officers as accurately as possible. And that quest for accuracy seems to be a common thread among everyone involved with SouthLand. 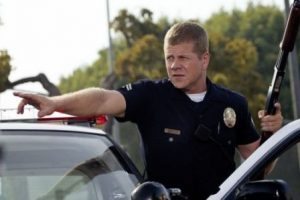 Anyway, that’s a little tidbit of inside information. Now on with the review… 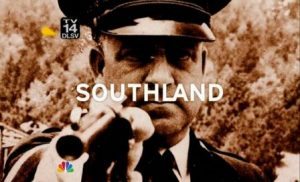 “Police officers often find themselves frustrated by the limitations of the legal system. Sometimes cops have to improvise…”

The episode opened showing the sharp contrast between the health and vigor of a new, young police officer (Ben easily running up a long, steep flight of stairs) as opposed to the older, seasoned cop who’s showing the aches, pains, and battle scars that come with years of working the streets (John grimacing with acute back pain). This “in with the new and out with the old” transition is one that remains unspoken among the ranks. And it sneaks up on you. One day you’re chasing a shoplifter down a back alley while the “old guys” watch from the seats of their patrol cars. The next day you suddenly find yourself sitting in your own car watching the rookie chase and tackle a purse snatcher. This is a real part of police work and Southland is the only show on TV that “knows” and shows that part of the life.

– Two detectives are shown shaking down two young gang members. Their pat down techniques were textbook, and they both looked very natural and relaxed during the search. In fact, they looked like they’d been doing this sort of thing for years.

– Cooper, while investigating a missing person case, sees the victim’s purse hanging in her locker at work. Instantly, he knows the woman is missing. He says, “Women don’t leave their purses.” This was a good observation. And it’s true. Find a purse, call the detectives. Because you’ve probably got a case.

– Detectives were questioning witnesses and generally poking around for evidence when one of the investigators asked Cooper and Sherman to give someone a ride home. Well, that sort of thing happens all the time. Detectives often ask patrol officers to do leg work for them.

– The scene where the K-9 searches for the missing woman was pretty darn realistic. Dogs are quite anxious to please their handlers. They’re trained that way. Doing what they do is a game to them so they get a little excited when they think they’re about to “play.” The dog’s nose in the air showed he was searching for the scent, or that he’d already picked up on the scent of the woman. Great scene. I’m partial to dogs anyway, since I had the pleasure of working with two of the coolest police K-9’s ever. 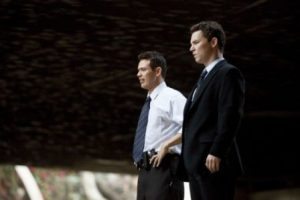 –  Two bodies found beneath a highway overpass prompted the detectives to turn to the local patrol officer (Chickie) for answers to their routine questions. Detectives realize that no one knows a particular area better than the patrol officers who work it day in and day out. The uniforms know all the regular crooks, and they know where they eat, sleep, buy their drugs and booze, and they know where they hide out. This conversation was on the money.

– The Southland crew used cop-slang phrases, such as “snitch killing,” “light them up,” “the shakes,” and “call the W.C.” And their use of of those terms and phrases roll of their tongues as if they were part of their everyday vocabulary.

Snitch killing – to kill someone who provides information to the police.

W.C. – Watch Commander. A watch commander is the officer in charge of a particular shift. Also known as the OIC.

Light them up – initiate a traffic stop by turning on the blue lights.

The shakes – people (usually street people) who have been searched or questioned (shaken down) while seeking information about an incident.

Officer #1, “You find out anything?

Officer #2, “Nothing from the shakes. But I did find a bullet casing on the ground.”

– Cooper quells a tense situation in a store where an irate customer is arguing with the clerk over a three-dollar difference in a refund. To settle the dispute Cooper reaches into his pocket, pulls out three one dollar bills, and gives them to the customer. As they say…been there, done that, and I’ve seen many other officers fork over a few bucks for various reasons. By the way, Cooper carried his money in his pocket, folded. Not in a wallet. That’s the way many police officers carry their cash. It’s tough to carry a wallet in a uniform pocket. Seems like it never fails to catch on items hanging from a gun belt. Also, you’re forever getting into scuffles and you simply don’t want it fall out of your pocket while you’re rolling around on the ground fighting with a combative pickpocket. Good detail.

– Speaking of details, the firefight in the street was incredibly accurate, from the dull pings heard when rounds struck the patrol car to the way these guys hold their weapons. Great scene. I did, however, worry about Ben confronting a shooter after he’d removed his vest. But, I believe it would have played out just like that in real life. This was a nice, tension-filled scene.

– Lydia asked the murder suspect to remove his shirt so she could examine his skin for scratches. Another good detail. Cops do this all the time and it pays off. 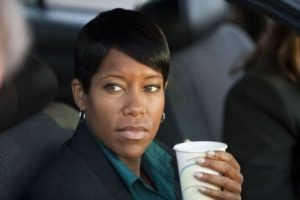 – Lydia said, “I believe in hope.” She was referring to the hope she had for finding the missing woman alive. I think all officers hang onto that hope until the last second because their ultimate goal is to protect people from harm. To find someone alive and well makes an officer feel that it was worth the effort and that they performed well. 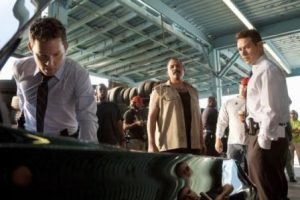 – The two detectives who questioned Reyes, the man responsible for the deaths of the two guys dumped under the bridge, found themselves in a situation where they were surrounded by bad guys and were about to be on the receiving end of an old-fashioned beating. Instead of standing their ground and going toe to toe with the over-sized thugs, they decided to get in their car and leave. Smart move. A dead hero is still dead. 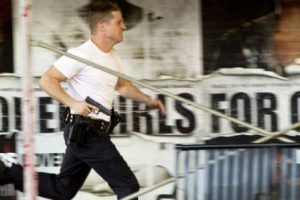 I could go on and on about why SouthLand is so realistic, and it is, but I’d like to leave a few accolades for the next episode. Wouldn’t want to swell their heads too much. How about you? What did you see right, or wrong, in this episode?