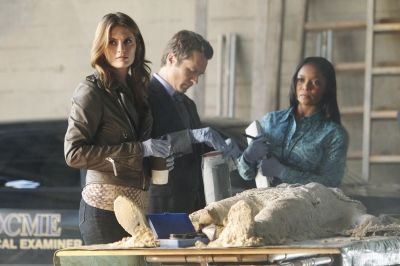 I had the perfect setting for watching last night’s episode—torrential downpours and winds topping 40mph. Nice ambiance for the return of 3XK, right? Well, the serial killer was a no-show, but the gun he swiped from Ryan did a couple of walk-ons. Actually, did you notice the Glock was almost a character in the show? It had a name (Glock 17) and everyone was talking about it as if it were a person—“Glock 17 killed that girl.” “Where is Glock 17?” And poor Ryan talked about the weapon as if it were a lover that had left him standing at the altar (remember me telling you that a cop’s weapon seems like a part of them?).

Anyway, I’ll have my turn in a minute. First, let’s see what Melanie has to say about this mess.

Well, Lee… I didn’t have any mushy stuff to blog about this week — except at the very beginning, when Castle asks Kate again if she remembers anything about when he was shot (and, of course, the I love you), and she denies it again (I think he knows she’s lying) — so this will be short and sweet. This episode seemed like more of a regular cop drama rather than the usual Castle “dramedy” fare. I liked it, but I did miss the usual Rick-Kate banter and the humor. All that aside, I think Seamus Dever knocked it out of the park. This was Ryan-centric episode, an emotional one, that focused on the gun stolen from him by the serial killer who took him and Rick hostage last year in “3XK”, and he nailed it.

Still, I had to question a few things related to the police procedure, such as: How could Lanie tell the victim had been shot and do an ID that fast when the body was covered in cement? Did I miss something? Also, how did they know the bullets that killed the victim were fired by Ryan’s gun when they didn’t have the gun to shoot so they could compare the rounds? Had it been tested before and the information was already in the system? Seems like there was more, but it escapes me now. Can’t wait to see what you say about this.

I love the continuity — that they didn’t just let Ryan’s missing gun just disappear and never resurface, but I would have liked to see more Rick-Kate interaction. What can I say? I’m addicted to Castle’s romance thread. Looks like next week will bring it on in spades, however, if the preview is any indication. I’m looking forward to that one. I’m ready for more excitement on the relationship front. 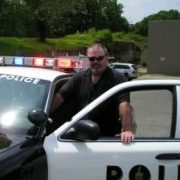 See, Melanie. The Writers’ Police Academy is rubbing off on you! I, too, was trying to remember if they’d test-fired Ryan’s weapon in an earlier episode. But I don’t believe they did. More magic forensics, I guess. And the concrete…or, perhaps we should we call it paper mache, because whatever it was covering the victim was definitely not concrete. The stuff coming down the chute of the concrete truck was off, too. And, here’s an FYI. Concrete used in buildings, pavements, and walkways contains an aggregate…gravel of some type. The stuff oozing down the chute did not.

Okay, on to the police stuff. First of all, Lanie was okay again this week. Nothing too goofy, other than the things Melanie mentioned. Still, her character is much better this year. I hope they keep it up.

Castle commented that he’d come to the realization that he’d been “play acting” as a cop. Well, duh. Did it take the writers including that line for anyone to pick up on that startling piece of news? You know, Castle has been around long enough now that he should be sworn in as a reserve officer, or something. Anything that would make the things he does a little more believable…and legal.

– The bartender told Beckett that her suspect had been in the bar earlier and was “strapped.” In case you didn’t know, that meant he was carrying a weapon.

– Seth, the undercover cop, was a little odd, yes, but I still wondered why they interviewed him just like they’d interview a real suspect (Beckett watching from behind the mirror). I’m sure they brought him in the room to continue his UC identity, but the rest wasn’t necessary. He knows the procedure, right?

– Castle fades out of the scene to begin pouring through mountains of Rikers Island prison records. You know, of course, that Castle would not have access to those records, right? Besides, those records would be kept where? That’s right, at the prison. Not the police station. Besides, isn’t Rikers Island a jail, not a prison? And WHY would Rikers Island officials allow a civilian to do that, anyway? Hey, I have an idea. Why don’t you drive up to the front gates of a prison and ask to see all the records they have on one of their inmates. And you want them immediately. And they’ll hop right to it because you’re a mystery writer. Yeah, right.

– I liked how Castle is now calling the shots on how Beckett investigates a case, telling her that she couldn’t work the 3XK case the way she wanted. Yeah, that could happen.

Finally, the U.S. Marshal comes in the PD with Ben at his side, and someone says, “The Marshal is escorting Ben to his new home in L.A.” Well, wouldn’t that sort of defeat the purpose of the witness protection program, telling people where the witness is going?

I didn’t see what happened between Ben and his brother the killer, because our local news decided to cut in at that moment with the nightly teaser about the 11:00pm news. Great timing, huh. And when the show came back on the scene was over. But, I’m thinking I didn’t miss much, especially if that scene followed suit with the rest of the show. Sure, it was much better than the last two episodes, but so are hemorrhoids.

Lisa Black: Another Glamorous Day In The Life Of A Forensic Scientist
Scroll to top