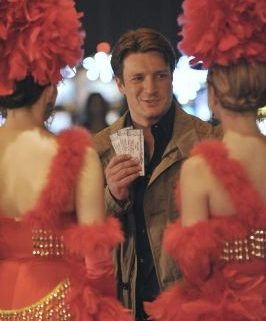 Heartbreak Hotel. Yes, that’s where we should begin this review, in a place where we can sit and reflect on a heart-breaking episode. Sure, there were fun parts, especially the “boys’ playing dress-up as Elvis impersonators. And was it just me, or did Castle sort of look like “The King?” Maybe just a little? And Alexis’ out-of-control party made us smile…sort of. I am glad, though, that she didn’t go off-character and become an instant party girl. But all this goopy stuff is for Melanie to address. I’m the cop-stuff person. So take it away, Melanie…

I’ve been jonesing for this episode since last week, hoping for a fun episode with lots of Kate-Rick interaction once she arrived in Atlantic City to meet them. That did not happen. I’m sure Lee will mention that the boys shouldn’t have been working the case there in the first place — in another state, with no New Jersey cops anywhere around — so I won’t go into that. Just please… next time, throw in a NJ detective to meet them at the casino and work with them. That’s all it would take. Would that be so hard?

The episode was fun in spots, but it certainly wasn’t the laugh-fest I was hoping to see. We didn’t get much Rick-Kate interaction at all, except at the very beginning — along with some smoke from Lanie’s ears when she was talking to Esposito. Ryan’s disappointment with his best man situation and the marriage jokes added another element, as did Kate defending Castle to Captain Gates. But that was it on the romance front. I had hoped for more after last week.

Alexis had some girls over for a party that quickly got out of control… as did the impromptu post-case bachelor party Castle, Ryan, and Esposito had in Atlantic City, apparently, if Castle’s hangover was any indication. I loved the end with him collapsing on the couch next to a relieved Alexis. Too cute.

All in all, I was disappointed in this episode, even if I did get a laugh out of Rick and the boys in the Elvis costumes. The episode in two weeks (no new one next week) looks much more intense and emotional. I can’t wait for that one.

Well, as you could probably tell from my opening paragraph, I wasn’t all that thrilled with this episode. And my displeasure was not because of the police inadequacies. Not all. First of all, and I know this is my opinion, but the show seemed quite empty with the “crew” away, leaving Beckett and Captain SteelPants working together. Maybe it was due to the fact that I absolutely can’t stand the new captain and how meek and mousey Beckett seems whenever she’s around that little darlin’. Whatever it was, the episode never clicked for me. Not at all.

And, I’ll say it until I’m blue in the face, the scenes with Lanie are a total distraction. They’re not necessary and the forensics she babbles on about aren’t needed to further the story. In fact, her comment about the victim’s bloody lip completely took away that element of surprise, for me. Why? Because I knew the second we saw the dead guy’s partner that he’d punched the victim during some sort of argument that would NOT be a crucial element of the crime. Yes, this show has become that predictable. It almost seems as if the powers-to-be issues boilerplate, fill-in-the-blanks, forms to a different writer each week. Shake it up a bit, guys. Please! You’re leaving nothing for our Suspicious Minds to decipher.

Lanie and Espo…yet, another forced, not-needed scene. Please, let’s move past the break-up stuff. It was old before it started (no Burning Love there…). Besides, we never learned enough about their relationship to give a flip one way or another. I’m guessing there’s a contract requiring a certain amount of airtime for Tamala Jones. Why else would they subject us to this nonsense. 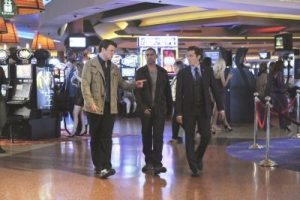 Okay, moving on…The crew is hard at work in a different city, in a different state. No, no, and no. They’d have no authority whatsoever in New Jersey. The proper thing to have done would have been to notify NJ officials about their case and then meet with local officers who would accompany the out-of-towners on their investigation. Then “the crew” would have the authority to do a job.  Of course, officers may talk to anybody, anywhere, if those folks are willing to talk to them. But it’s always smart to contact the local agency before an out-of-town cop shows up and starts poking around in unfamiliar territory. It’s the safe thing to do. And it provides the necessary legalities to the investigation. In NJ, Ryan and Espo were nothing more than ordinary citizens. Of course, that’s what Castle is, even in his home state…an ordinary citizen. 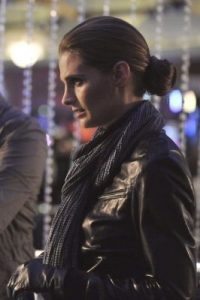 Hey, what was up with Beckett’s hairdo? Any thoughts as to why she wore the bun in this episode? Was it supposed to show that she was tough and could work alone without the team?

And…once again, the NYPD crew was not smart enough to reach a conclusion in the case. It was Castle who faced the danger, managing to pull the conclusion to this boring case out of thin air.

This was one episode I wish I could “Return To Sender.”