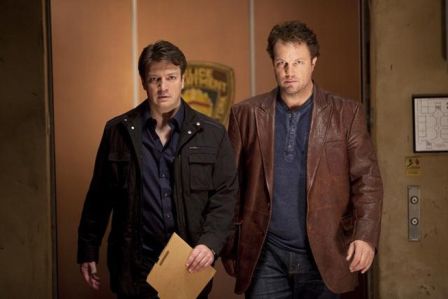 Finally, the show that used to be so much fun was…BACK!

Yes, thanks to the partnering of Fillion and guest star and former Firefly bud Adam Baldwin, we were actually entertained for an entire episode. No angst. No pressure. No stupid goo-goo eyes. And no voodoo forensics! Just a fun, fun hour (42 minutes) of good TV-watching. Oh, did I mention this episode was fun? In fact, this episode was so good I didn’t pay a lot of attention to the case, even though I sort of guessed the killer (Michael McGrady, who also played Detective Sallinger on Southland) when I first saw him on screen.

Anyway, this is how it’s supposed to be, making fiction seem real instead of ridiculous. Good job.

What a great episode! Finally, the writers returned to that fun mix of drama and comedy that got us hooked on this show in the first place. I’ve missed that lately. Rick continued to be borderline obnoxious with his search for new inspiration, however, and he’s also hiding college acceptance letters from Alexis. I wanted to pinch him for that alone. 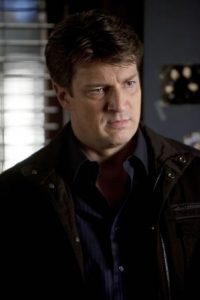 He’s not getting any inspiration from Kate right now because he’s still too busy being an ass — in my opinion, anyway — so he decides to believe the old adage that the grass is always greener on the other side of the fence and bargains with a detective he sees on the news, a rogue cop dealing with a high profile case involving severed heads, until the man agrees to let him follow him.

The only problem? He’s never met Detective Ethan Slaughter. So he approaches Kate to get more info about the man. She’s startled and so very happy to see him when he appears beside her desk and greets her like he used to, with two coffees and a disarming smile. Then she learns the real reason for his charming presence, and her face falls. Not only is he giving her the cold shoulder, but now he wants to follow another detective. Stana Katic does a great job portraying Kate’s pain.

Detective Slaughter is played by Nathan Fillion’s old Firefly pal Adam Baldwyn, and although I’ve only seen a couple of episodes of that show, I got the symbolism of Rick giving Slaughter his brown leather coat. As in, the Browncoats… from Firefly. They probably wove in a few other references, but I didn’t catch those. I’m sure others did, however.

Slaughter is a rough hewn detective known as the Widowmaker because his last three partners were killed in the line of duty. His brusque, irreverent style, blatant disregard for any rules except his own, and fast car impress Rick. Then the detective asks him about Kate and wants to know if he’s tapping her, and Rick tells him no. He and Kate are just friends. Slaughter scoffs at him and says, “A man who needs a friend gets a dog. A woman like that… you storm the beaches or die trying.” Hmmm.

Slaughter gives Rick a gun and sends him in the front door of a club all by himself. I laughed out loud when Rick yells, “NPDY!” and gets in a crazy fight that ends with him getting with a bloody nose and then knocking the guy out with a beer bottle. So funny!

After the fight, Rick walks into the Twelfth with a swagger in his step and a gleam in his eye — and runs headlong into an angry Kate Beckett. Slaughter wastes no time checking out the way her jeans fit her backside, and I don’t think Rick even notices. Grrrr! She gives Rick hell for teaming up with Slaughter, and he’s a bit taken aback because… didn’t they get the guys they were after? He turns to Ryan and Esposito for help with the case when Kate turns away, and they milk it for all it’s worth. 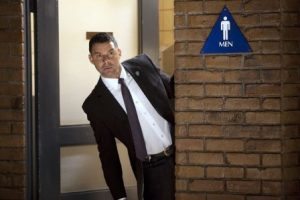 Kate apparently still hasn’t figured out Rick overheard her in the interrogation room, and that bothers me. But at least she goes to see her therapist after her confrontation with Rick. The psychiatrist doesn’t give her any answers, but he does make her think about what she wants to do about her partner’s defection. Does she want to confront him about leaving her? To try to move on? To forget he ever existed? She has a lot to think about.

As they wait for a suspect to show up at another location, Slaughter tells Rick he’d “go all caveman on that partner of yours. Show her what time it is in real man land.” Then he says something about Alexis, who’s still interning in the morgue, and Rick punches him. I love that scene. He’s such a good dad, and he defends his daughter’s honor with clumsy grace. I believe that’s when he finally begins to realize Slaughter isn’t such a nice guy.

The boys end up saving Rick and Slaughter’s bacon when they go into yet another situation without backup — and once they return to the precinct, Rick learns Kate was in on it, too. That she was following the case and had looked up important information. “You did this for me?” he says, obviously shocked. “All this time, you had my back.” Yes, dummy… she does have your back. Open your eyes! 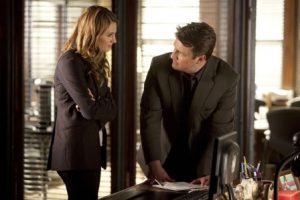 Kate jumps into the case with both feet, and Rick soon comes to the conclusion that Slaughter isn’t the kind of detective he wants to write about after all, that maybe the grass isn’t greener on his side of the fence. And Rick finds himself partnered again with Kate, where he should’ve been after all, and they find the real killer.

The last scene brings Rick yet another revelation, when Alexis opens all of her college letters and learns that Stanford — her first choice and the school that denied her early admission — has also accepted her. She has trouble getting over that rejection, and Rick says, “Do you want it badly enough… to get over being hurt?”

That question seems to open his eyes and make him think of Kate. So maybe, just maybe, he’s going to stop acting like such an ass and apologize to Kate. I hope so! Unfortunately, we won’t know for two weeks, because the next new Castle episode doesn’t air until April 30. Only two more episodes to go in season four. I have my shipper hat on and am ready and waiting for a little Caskett happiness.

As I said earlier, I didn’t pay a lot of attention to the police stuff because I was too busy enjoying the show. But I absolutely must mention the appearance of the new pathologist, who played her part quite well. She delivered brief, but believable lines, with authority, not as if she were reading a fairytale to the audience. And, she was actually doing stuff a real M.E. would do, complete with evidence (bullets) in a sealed evidence bag. Nope, not a pin-stuck doll or Ouija Board in the place. How refreshing!

The severed head/murder case took a back seat to the antics of Detective Slaughter and Castle, who, by the way, delivered some great one-liners throughout the show. Such as: 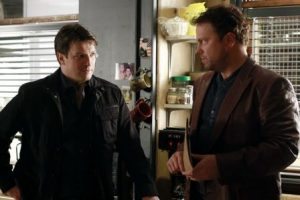 Slaughter on the victim’s cause of death – “Let me guess…lead poisoning.” (an old cop’s joke about being shot)

Castle naming his fists “Jake and the Fatman.”

Slaughter to Castle – “Do not use the word ‘awesome.’ You’re a grown man.”

Castle tells Slaughter that he and Beckett are just friends. Slaughter replies, “Man needs a friend he gets a dog.”

Slaughter to Castle – “I need a writer hanging around like I need a case of the crabs.” (a sentiment felt by many real-life cops).

Slaughter referring to guy in rear compartment of garbage truck – “Better stand back, this guy’s gonna pop like a grape.”

And that’s pretty much how the entire episode went, until Beckett and crew showed up. Then the show gradually oozed back into the darkness we’ve been watching for what seems like an eternity. For some reason, when those guys showed up they seemed to suck the life out of what had, up to that point, been a great deal of fun.

However, the good far outweighed the very little bad. What a great episode of Castle…the Castle we once knew. Even Nathan Fillion was back to his old self this week. There was a spring in his step and an edge on his dialog that we haven’t seen in quite a while. I wish we’d see that lightness continue, but I fear not because the characters have to somehow deal with the dark cloud of unrealistic, pre-teen romance the writers have hanging over their heads.

Actually, I’d rather see Castle and Beckett discover that they’re totally incompatible as romantic partners. Then they could go back to being friends and get this show back on track.

For now, though, I certainly hope to see more episodes like we saw last night. After all, Castle even briefly talked about writing a book, and isn’t that what the show is supposed to be about, a mystery writer tagging along with a detective as part of his research? That, not saving the world, is what made the show so much fun.

Overall, I gladly give this one a hearty thumbs-up.

The 8 Most Notorious Criminals in Hollywood History
Scroll to top