Like the determined and hopeful writer who, even after after a gagillion rejection letters, pens yet another query—3XK is back. Fortunately, the entire crew—Beckett, Castle, Ryan, Esposito, and Lanie were all on hand to handle this week’s case. There were no goofy characters to take us out of the story. The writers seemed to have gotten their heads out of their collective…well, let’s just say the writing was bit better this week.

I know I’m in the minority this week, but I didn’t particularly care for the story, but that’s because I’ve never cared for the whole 3XK larger-than-life thread that pops up from time to time. Still, the show was back on track this week and that’s a good thing. And I believe it would be a safe bet to say that Melanie loved this one. Let’s see…

A few articles about this episode before it aired referred to it as the “double doppelganger” episode, and now we know why. Some jerk, possibly Rick and Kate’s old nemesis 3XK, murdered two people who’d had plastic surgery to make them resemble Lanie and Esposito. Tamala Jones and Jon Huertes played both parts, and I’ve read where lying on the slabs really got to them — and that’s totally understandable. So creepy! The murderer killed them by hanging them with high test fishing line and took care to make the process as painful as possible.

Such a great show. It grabbed me right off the bat and didn’t let go. We didn’t get much at all in the relationship department, other than Kate’s belief that Jerry Tyson is dead, and Rick’s instance that the scumbag survived being shot and falling 100 feet off a bridge the last time they dealt with him, but for once I didn’t mind. I was on the edge of my seat. And as the show wore on, and especially at the end, when Rick discovered the flash drive inside the pen and played the spine-chilling song on his laptop, I believe even Kate might have changed her tune.

What do you think? Is Jerry Tyson, the infamous 3XK, still alive? Or is Kelly Nieman, the plastic surgeon, merely his disciple? She obviously trained Carl, the man charged with killing the two doppelgangers and several people in Florida, so she’s capable of great evil. She also disappeared without a trace, leaving us with a terrifying mystery. When will she or Jerry Tyson reappear? Like the song says, probably when we least expect it, on some sunny day. Ack!

What a fabulous episode. Director Rob Bowman outdid himself in this one, don’t you think? I loved every second of it, even though it didn’t contain buckets of Casketty goodness. We should get enough of that in next week’s show to make up for this one anyway, if the promo is anything to go by. Rick and Kate babysitting a baby found while they investigate a case? Haha! I can’t wait. In my opinion, this year’s episodes are better than ever. Bring on the baby!

As I said earlier, I wasn’t thrilled to see the return of 3XK. However, aside from that broken record, it was indeed nice to see the show back on track with the characters doing what they do best, solving crimes and interacting as a team. Oh, and they entertained their audience without a single appearance by either of the silly characters of weeks past.

I suspect that the person in charge of Castle bill-paying apparently forgot to send a check to the power company. Either that or they filmed this episode on the CSI set. I say this because the entire episode was filmed in near darkness. Believe me, folks, cops are allowed to turn on the lights, and they do. Sort of makes it easier to locate evidence, do paperwork, and to prevent everyone from using service dogs just to navigate throughout the precinct. 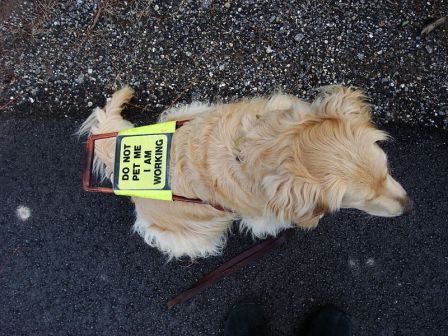 Anyway, on with the procedure (This segment, you loyal Castle fans, began as a guide for the writers who visit this site. However, everyone is welcome, and I appreciate that you, too, stop by from time to time).

– High test wire fishing line is great for use when trying to hook a fish burdened with a large overbite (or other toothy fish), but its use for hanging a human by the the neck could be exceptionally aggravating. The weight of a person who had the misfortune of being turned into an over-sized holiday tree ornament, would likely cause the wire to cut deeply into the flesh. More so than the neck wound we saw on Lanie’s dead doppelganger. I was also left to wonder exactly how the killer managed to lift the victim having only a wire to hold and use for pulling. But it’s fiction, and the scene was pretty cool. The impact of slowly discovering the victim’s feet just inches above the decking was well-done. By the way, this was the time for low-lighting. Not in the precinct.

– Unless removed, digital photos do indeed contain information such as your location when the photo was taken. This was a nice touch, and it came across much better than having the IT person activate a remote camera in some weird but convenient place, such as one embedded in a bed of Shasta daisies in the courtyard of the Killrz Stay-Free Motel and Haberdashery.

– Maybe you guys can help me to better understand something. Beckett and Castle were in the plastic surgeon’s office where it was business as usual, with patients and employees scurrying about. Yet, when Ryan called her he was at the docks and it was totally dark outside. Street lights were on and the sky was as black as squid ink. So which was it, day or night? Couldn’t be both. Unless, in her spare time, Lanie had developed a time machine using the same voodoo technology she uses to predict times of death. Yes, I’m sure that’s it. They used Lanie’s Time Machine/TOD Estimator (patent pending).

– During her questioning session with Beckett, the plastic surgeon said something to the effect of, “If you don’t charge me, I can go.” She’s right. Unless there are charges a person is free to go. In fact, unless you’re under arrest you don’t have to go to the police department.

– I just loved it when the IT person, the Merlin the Magician of the NYPD, pulled up an image of the security guard/killer (in plain clothes) and then superimposed a hat, badge, and uniform over his clothing. That was a real knee-slapper.

– Okay, I get it that 3XK is a larger than life villain. He’s evil. And he can’t be caught, like that lone fly that somehow gets inside the house and buzzes and buzzes and buzzes, but you never see it. Then one day you suddenly notice the sound isn’t there. But to have the Espo and Lanie clones, especially the Esposito look-alike, remove massive amounts of evidence and files (a truck load, at least) from locked, monitored, and supervised facilities…well, it’s about as likely as me landing a role as a stand-in for George Clooney. Yeah, that unbelievable.

Again, while the episode, to me, was a bit boring (only because I’m not fond of the whole 3XK thing), it was by far the best episode of the season.

Hey, what if, instead of police files and evidence, 3XK had kidnapped Pi and took him to Lanie’s time machine? He could’ve sent the grapefruit guru off to a place and time where he’d be forced to listen to Gilbert Gottfried do nonstop standup comedy. I think that would be a fair punishment for the torture Pi has inflicted on us this season.

I know, enough of the Pi-bashing, but he’s like a cucumber, or a radish. I have an awful feeling that he’s going to “repeat” on us.

My Aching Back: Typewriters, Sawed-Off Broom Handles, and Tasers
Scroll to top