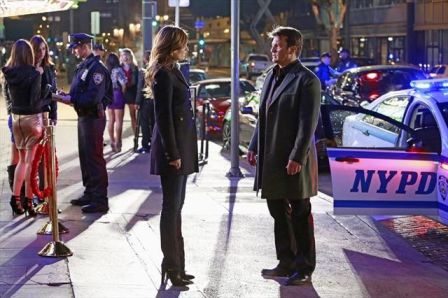 For me, this episode of Castle backpedaled to days of the “fill-in-the-blanks-on-the-boilerplate-script.” There wasn’t even a hint of a relationship between Castle and Beckett. They are an item, right? Well, you certainly couldn’t tell by watching this episode. And, the case went through the predictable motions of tossing in a few red herrings before heading back to the real killer, someone who had the least amount of screen time. As usual, we had him pegged early in the episode.

By the way, it was nice to see Kelly Hu introduce a tough-as-rusty-nails female bodyguard character.

And that Esposito thought she was hot—even more so because she broke a guy’s nose—was a cool way to add more depth to his character.

But, enough of my ramblings. Let’s see what Melanie thought of this semi-yawner.

This episode, like Under the Influence last week, was case-based, without any fun Kate-Rick relationship moments. To me, it seemed like more of a “filler” show, one that didn’t really mean anything, to get us through to February sweeps. I enjoyed it, as that type of show goes, but certainly won’t list it as one of my favorites. I prefer the ones that concentrate on the Caskett relationship.

We were, however, treated to some nice Rick-Alexis moments. I would have liked them more if they’d added Kate to the mix, because she and Rick are dating now. I mean, really! They pretty much ignored the progress made during the Christmas episode. I didn’t like that at all.

Kate and Rick did work well together, and yet their interactions came off as more like they were before the two of them got together. To be honest, I got a lot more enjoyment out of the Ryan-Esposito moments tonight than I did the Kate-Rick dynamic. Again, I say, “filler” show. One the producers could plug in anywhere and know it would fit. Can you say “boring”?

I look forward to February sweeps, because maybe then the show will get back on track as far as the Rick-Kate relationship goes. From what I’ve heard, we’re in for some drama and then some fun Valentine’s Day moments. Bring it on!

Where do I start? Perhaps a brief warning to Alexis about the very real dangers of posting personal information on blogs, Facebook, and/or video blogs/vlogs? Or, should I begin with Lanie’s semi-return to voodoo forensics?

First, let’s do make a brief mention about posting things online, such as where you’re going, what you’ll be wearing, who you’ll be with, or that you’re home alone and will be alone all weekend because your parents/spouse, guard dog, etc. are all away for a few days.

Remember, it’s fairly easy to track someone to their location by using the data that’s automatically embedded in photos and videos (EXIF – Exchangeable Image File Format). EXIF files contain information such as camera type, cell phone model, camera serial number, and, most importantly, if the geotagging feature of the phone is turned on, the location of the device (precise latitude and longitude) is instantly available. What does all of this gobbledygook mean? Simple…it provides the exact location where the video/photo was taken…YOUR HOUSE!

Cause of death was strangulation. Bruises on the neck were made by the clasp on a bra found nearby. Really? You were able to make those positive determinations in the field? Really? No autopsy to detect the possibility of gunshot wounds, stab wounds, heart attack, stroke, liver or kidney failure, poisoning, head injury from falling to the floor while playing the hanging/choking game with a bra, and, well, you get the idea. Why, Lanie? Why do this when you were on such a good and solid path? And why are you, Lanie, conducting tests on evidence? With unemployment reaching such high numbers, you’d think it would be nice to allow the people in the labs to do their jobs. But, I guess cross-training M.E.’s and coroners to do it all is a good way for municipalities to save taxpayer money. Besides, I’m sure the M’E.’s in NYC have plenty of spare time to run a few lab tests…Yeah, right.

– I believe it was Ryan who said he’d called the hospital and learned that one of the red herrings had been treated for a broken nose and ribs. Hospitals/doctors, etc. are not allowed to freely provide that sort of information. Only with the proper paperwork, folks. You know, like a court order.

– Beckett and Castle arrive at a shady-looking warehouse hoping to locate the broken-nose guy. Beckett parked across the street, down from the doorway, and got out of her car with her gun already in her hand. I’m not sure she intended for the viewing audience (us) to see that, but we did. Why do that? If the situation were that dangerous why not bring along some backup instead of chatty-Castle who never shut up from the time he stepped from the car. No sneaking up on anyone in this scene. And she went in, gun first. Again, if she thought it was that dangerous she should have brought along the dynamic duo or a couple of patrol officers.

– As always, always, always, we watched the crew interview a few red herrings before taking us back to the beginning where we saw, for a few seconds, the real killer who is, always introduced early, extremely friendly and helpful, and has no other part in the show. Each week I hope for something different, but noooooo…

Anyway, Alexis…stop offering personal information online. And, Lanie, I’ve been bragging about you, lately. Please don’t take any more steps backward. Fight the urges to pull out the voodoo dolls and crystal ball. Be strong. You can do it!

Finally, the best line of the night goes to Esposito. 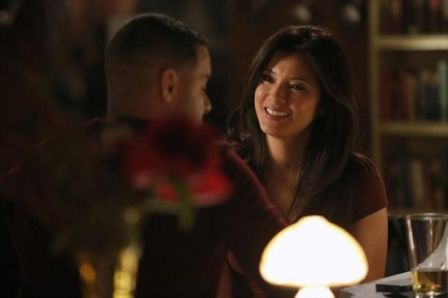 “She broke a guy’s nose. You know she’s gotta be freaky.”

How Many Gun Deaths Since Sandy Hook?
Scroll to top