Last week’s episode was one of the best, if not THE best episode to date. This week…well, this one paled in comparison. However, the true test will be whether or not the applause bears show up, so stay tuned.

This episode, Almost Famous, was written by Elizabeth Davis who has a very strong track record of writing the worst episodes of Castle, such as Little Girl Lost, One Man’s Treasure, and Boom, the show featuring the obnoxious and totally unbelievable FBI agent played by Dana Delaney. Well, Davis can sleep soundly tonight because she managed to keep her record intact. Another boring episode leaked from her pen and fell onto the pages of a Castle script. Sure, there were moments when my wife didn’t have to nudge me to keep me from nodding off. But there were other times when I had trouble finding something to write about due to the lack of substance in the show.

Almost Famous started off with a bang. A male stripper, dressed as a cop, entertained a group of very-happy-to-see-him ladies. Unfortunately, the stripper’s night and life were both cut short when someone shot him to death outside in an alley (no respect for the uniform at all!). And this is the point where we’ll begin our analysis of the police procedure and forensics.

– M.E. Lanie Parish determined the cause of death as a single gunshot wound to the chest. Of course she hadn’t removed the victim’s clothing yet, so he could’ve had massive piranha bites on his back and rear end for all she knew. But, she delivered the line in a very respectable and believable manner. So good for her. And, her M.E. persona has taken a huge turn for the better in the past two or three episodes. Still, I’m holding my breath fearing the return of the old Lanie. I do hope she’s gone for good.

– Beckett and Castle climb INTO the victim’s car and start pawing through his belongings, touching (gloveless) what could have been evidence in the MURDER case. I’m not saying that real-life detectives wouldn’t have dug around a bit to see if they could locate some important information, because they would. But they wouldn’t have settled inside the vehicle like they were at a drive-in movie.

– Okay, it didn’t take long for the old psychic M.E. to poke her head in the door. Yep, the evil twin Lanie popped in to tell us she’d found a hair on the victim’s clothing, a long blond hair. Okay so far…But, she went one step over the line when she said she tested the hair and found anabolic steroids and testosterone in the hair, therefore the hair belonged to a male. Why would she have tested the hair for steroids and testosterone? I’ll answer that one. No, she wouldn’t have done so. But not every M.E. has crystal ball. Besides, couldn’t the hair have belonged to someone who was currently undergoing a female to male sex change? Or, how about a female bodybuilder?

– I’m really liking the way Ryan and Esposito have developed into their own characters instead of the old two-guys-enter-the-room-at-once characters. They now dress differently and they have their own personalities and duties. And, they’re believable as cops.

– Beckett and Castle go to a male strip club to question a potential murder suspect. 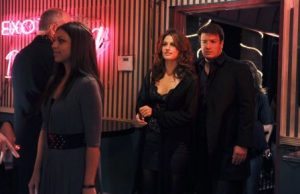 Beckett pulls out her badge and approaches the guy while he’s on stage performing. In the real world she’d have waited until he’d completed his act. 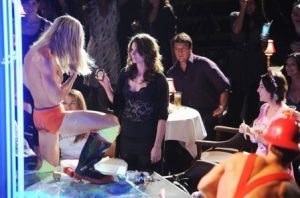 – Beckett takes Castle with her to a rough and tumble biker hangout to question a possible murderer. In real life she should have taken along some back up. Foolish move to go alone, or with a civilian.

– Esposito spoke about talking to his CI (confidential informant). Good use of terminology.

– Now, here’s where the show took a weird turn for me. The whole stripper angle had moments where Castle was able to be his usual goofy self. 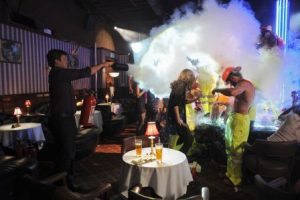 But when we finally learned the killer’s identity and why he committed the murder, well, the ending was a huge let down. It was almost as if the writer arrived at that point and realized that she had nothing, so she stuck in an ending from an entirely different show. An ending that really had nothing to do with the rest of the story. No real clues. Nothing much to help us help Beckett and team solve the case. And that’s a shame because part of the fun of this show is riding along with the detectives seeing the case develop at the same time they do.

Honestly, if not for writing these reviews I’d skip future episodes written by Davis.

Oh, remember the applause bears? I asked them how they felt about this week’s show and this is all I got… 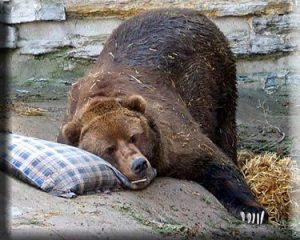