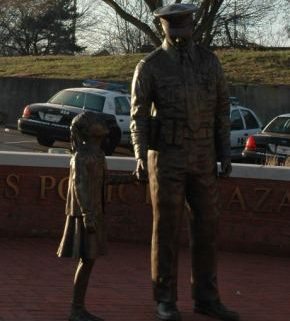 If the headline read, Attacks Leave Five Dozen Americans Dead, would you be alarmed? Would you sit up and take notice? Would you want justice served? Sure you would. And rightly so. And I’ve heard the anger when Americans speak of our soldiers dying when they’re attacked while defending us. Again, we have a right to be angry at the barbarians who killed those brave young men and women. These are front page stories. Big headlines. And they make us mad. They make us sad. And some have even wanted to seek vengeance by blowing up entire countries. Yes, we want to stand by our own…right?

Then why is it when a police officer is shot and killed the story rarely makes the front page? When, or if, an officer’s death does make the headlines the article is normally buried beneath a story like the latest Sarah Palin adventure—her kid’s gutter mouths, a moose killing, or making smores.

Police officer on-duty deaths are on the rise at an alarming rate. There was a 37 percent increase in those deaths this year, and it seems like cop-killing has almost become a sport for some bad guys.

In 2010 alone, 160 police officers have lost their lives while enforcing our laws and defending our lives and property. Those 160 officers left home that morning fully expecting to return home to a nice dinner with their families, play a little catch with their kids, and maybe watch Castle on TV before turning in for the night. Instead, some thug decided that killing a cop to escape arrest was better than serving 6 months in jail for shoplifting.

Fifty-nine police officers were gunned down this year. Yes, someone pulled the trigger on a weapon while taking aim at a police officer. And those officers fell to the ground, bleeding, and died. Blood drained from their bodies, pouring out onto asphalt, concrete, carpeting, and stairways. The scenario is becoming a familiar one. It’s almost as if cop-killing is becoming another way of life—collateral damage. Or a badge of honor among street thugs. It’s sickening.

Yesterday, I attended a large family gathering. We enjoyed a nice meal together and catching up on the latest news led to a house full of loud chatter. One of the family members seated near me is a deputy sheriff and, of course, we talked shop. He’s a young man who loves his job. He loves the uniform and the badge and what they stand for. Listening to him reminded me of me thirty years ago when I was saying the same things to another retired police officer, a man I admired and who was largely responsible for igniting the “want to be a cop” fire in me.

During my conversation yesterday with Deputy Family Member, I noticed how quiet and soft-spoken he was. He’s a large muscular man, like many deputies, and I sensed that his size is in direct proportion to his compassion for the people he serves. I also noticed that he took the time to think before speaking. His words were measured and his statements were especially meaningful when we discussed officer safety. My thoughts quickly drifted to my Friday blogs honoring the officers who’ve been killed in the line of duty during those individual weeks.

I know that police officers have been trained to be as safe as possible. But I wonder if we haven’t somehow painted a bulls eye on their chests by forcing departments to cut back on manpower (backup), supplies, and training. Times are tight, yes, but is reducing officer safety the place to start pinching pennies? To me, five dozen dead police officers is unacceptable. And those are just the ones who were shot and killed this year. One-hundred-one more were run over by cars, beaten to death, killed in car crashes while chasing fleeing felons, and a few suffered fatal heart attacks while struggling with some punk who was attempting to escape arrest.

So, if the headline read,  Nearly Fourteen Dozen Americans Dead, would you take notice? You should, because that’s how many officers have died in the line of duty so far this year.

To all the officers out there…Please be careful. Wear your vests. And don’t take any chances. There’s no shame in a tactical retreat. Your family enjoys spending time with you. Even if it’s only once a year at the holiday gathering.