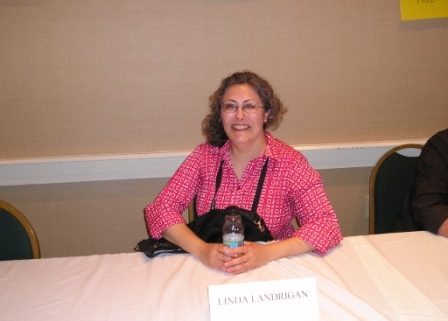 The Paradox of Brevity: What short-shorts can teach us about writing

Linda Landrigan, Alfred Hitchcock Mystery Magazine editor
Good short stories, for me, are closer to poetry than to novels. Nuanced and evocative, good short stories focus narrowly on something small, an incident or character, while suggesting their larger reality. Short-shorts, such as I read for The Graveyard Shift’s contest, perhaps illustrate that best. By necessity, short-shorts demand that the reader bring his or her own imagination to the story, and thus provide a richer reading experience. Each of the stories I read for the contest presented a universe turned inside out. That is, despite – or perhaps because of – their brevity, the worlds evoked by the short shorts were finely wrought and the characters sharply delineated. More, as in word count, doesn’t always equal better.

Of the contest short-shorts, I read the entries first without looking at the photo that inspired them. I didn’t really need to – the stories all captured the essence of the image. When I did go back and look at the photo I wasn’t at all surprised. Each story had given me just enough detail to be able to fill in the gaps. That’s an incredible accomplishment, and in order to convey a vivid setting with so few words, the author must first fully imagine the place and action and characters.

Each short-short I read had a close-knit plot that moved a small incident forward. No digressions broke the rhythm of that. Each story had a narrow focus that spotlighted a revelation or a change in character or an ironic plot twist. There were no extraneous descriptions to bog down the plot, no unnecessary backstory to explain away a character’s mystique. Rather, each short short was concrete and the action took place in present time (of the story). Each had a tight narrative sequence that answered in some respect the “why” of the character or situation.

As an editor I’m not always looking for the story that has never been told before; more often than not, the stories I see and buy have been done many times over. What I’m looking for is a fresh take: the spousal murder or world-weary PI that shows me something new. Imagine telling the story in a bar: You tell the story not because it’s familiar, but because there is something different about it that is interesting. I believe that after the first draft is written, writers should sit back and ask, Why am I telling this story? Or to put it another way, What makes it worth telling? If this story were boiled down to a short-short, what would it look like?

When you’ve answered this question, then you can go back and look at each sentence, nugget of description, slice of dialog and ask how it moves the story forward or is relevant to its essential point.

What can you take from the experience of writing a short-short and apply to writing a short story, novella, or even a novel? First, understand the focus and point of your story, and dispassionately edit out any obvious, overstated, or irrelevant bit of information. Trust your readers to bring to the story their ability to visualize the setting after you’ve set down the salient details. These are useful disciplines for writers at any length, and absolute requirements for the writer of the short-short. 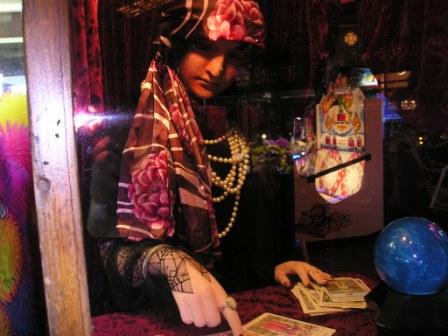 A shard of pain cut through Magda when she leaned over. She talked back to Tamas last night and he beat her bad. She studied the tarot cards on the table. They said her future held hope-but did it? The cards had deceived her before. She picked up the one with the image of a dark, weathered wall. Terrifying memories seeped through its cracks-of smuggling into the country, her handlers’ blows, their unwashed bodies and laughter after they’d used her. Now at Tamas bidding, she told fortunes to bad men pretending to be tourists, selling girls and buying drugs from him.
Beyond the curtained doorway, the floorboards shook from heavy footsteps and Magda bowed her head. She wanted to pray, but nothing came.
A hand pulled aside the door’s heavy curtain, and he entered, letting the curtain fall behind him.
He sat down and Magda spread the cards in front of him. In a trembling voice, she said, “I will tell your fortune.”
He studied them, head down, voice muffled. “Here’s yours. Raid’s tonight. Three a.m. We’ll take you with the others. You talk, you walk-with new ID and papers.
“Welcome to America.”

All Too Well
By Todd Diel
teserk@yahoo.com

“May I read your fortune?” Her accent was as exotic as her dress.

Three cards were laid out face up on the table. A pale hand with an intricate spider web tattoo indicated the first.

“The Jack of Swords. You are a warrior, one who fights for the innocent and oppressed.”

She motioned to the second card. “The six of pentacles. You have a trusted friend.”

I glanced toward the back of the store. My partner was paying the clerk.

I looked back at the table. The hand touched the third card, this one sporting the image of two lovers. The card was reversed.

“They were all out of the chocolate frosted,” Riley said from behind me. I turned to find my partner holding out a glazed donut and a steaming cup of coffee. Traces of chocolate frosting lingered on his upper lip.

“What?” he asked again. “Machine not working, right?”

He licked his lips self-consciously. I eyed the tattooed hand and shook my head.

Madame Zorba mocked him from her box. She had warned him, and now he stewed under her gaze in overalls and work boots.
He rested his cast on the bar. Just a freak accident. Ordering another budget beer, he sipped it near Madame Zorba, her lips curled provocatively, tempting. He set the beer down.
“Come on, Baby,” he dared with a quarter. “Show me what you’ve got.”
A three card spread went down-past, present, future-her finger stopping over the devil card. A message scrolled out: Death for you.
She laughed mechanically, “Ah-ah-ah-ah-ah.”
“No Lady Luck, are you?” he said. “You and my past old lady. Purgatory for you both.”
He knocked back his beer, crushed the can, threw it against the wall, then kicked the machine.
“Ah-ah-ah-ah-ah.”
“Yeah? You laughing at me?”
The maniacal head bobbed. “Ah-ah-ah-ah-ah.”
“You, shut up!”
Slamming his cast through the Plexiglas, he squeezed his good, meaty arm through the jagged hole to throttle the mannequin. But strength deserted him and suddenly he was on the tile with blood spurting speedily from his arm, the devil card face-up in the blood.
“Devil woman!”
“Ah-ah-ah-ah-ah.”
A message scrolled out.
Welcome, Bill.

THE DISAPPEARANCE OF SARAH

Ten long years, but I remember it like it was yesterday. One minute we were laughing over the “prediction” Sarah had gotten from the fortune teller’s booth in the arcade, the next minute she was gone. Vanished. I never saw my fifteen year old best friend again.

I hadn’t been to Folly Park since. Until today. I felt drawn to the auction of equipment in the now closed park. I had to see that booth one last time. I wanted the closure that I knew would never come. I wanted to make sense of Sarah’s disappearance.

My stomach was in knots as I approached the booth. I dug a quarter from my purse, dropped it in the slot. The fortune teller began moving, her hand sliding mechanically across her tarot cards. Seconds later, a card popped out . I picked it up, thinking about what had been on Sarah’s card. Hers read, “You will meet a mysterious stranger.”

I looked at my card, not seeing the words through my tears.

“I knew you would come,” a voice behind me said. Even after all this time I recognized it.

I turned around. “Sarah.”

I Spent The Day In The Hospital, AGAIN!
Scroll to top