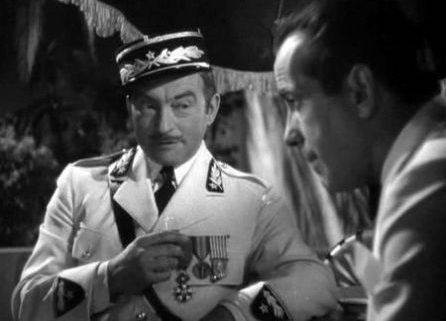 Most police officers take on the job because they want to serve and protect their communities. But there’s a lot of responsibility and power that comes with carrying a badge and gun. And sometimes, good cops turn bad. Very, very bad, especially in the movies. Spoiler alert: If you haven’t seen these films, we’re going to be revealing some key plots twists and endings for some of them, so read at your own risk. We just hope none of these films were based on true stories.

You may have trouble picturing Richard Gere as anything but Julia Roberts’ movie soul mate, but he also knows how to play a cop-gone-bad. Gere’s character Dennis Peck, a patrolman with some questionable morals, is a guy you never want to run across, whether he’s on duty or off. At first, you think he’s just a little crooked when it comes to protecting his fellow officers, but it’s worse than that. He sleeps with the wives of his associates, arranges a hit on his partner, and tries to manipulate the internal affairs officers who are investigating him. He’s cold, ruthless, and hiding behind a badge.

Orson Welles not only wrote and directed this classic 1958 film noir; he also starred as the terrible police captain, Hank Quinlan. The captain has been planting evidence for years so that he’ll get more convictions in his cases. That’s not so bad, right? Well, when a drug enforcement officer, Miguel Vargas, is onto him, Quinlan becomes much worse, having Vargas’ wife kidnapped and framed for murder, and then trying to get Vargas himself arrested for a murder Quinlan committed. Does it help that Quinlan had planted evidence on a guilty person?

This character, played by a mustachioed Josh Brolin, kills a guy’s dog. That’s basically all you need to know to understand that he’s a seriously dirty cop. Since American Gangster is based on the true story of gangster Frank Lucas, Trupo is based on a real person Lucas referred to as Babyface, though it’s unclear how many of the details were made up for the movie. Trupo bullies and intimidates in order to get a cut of Lucas’ drug money, and runs his district like a criminal boss, even threatening fellow policemen. In the end, he proves himself corrupt and cowardly, killing himself to avoid prosecution.

Leave it to the French to show us a movie “policier” unlike any other. Lucien Cordier is an officer in a French West African village and is basically trampled on by everyone in his life, including the local criminals and his own wife. You can probably see where this is headed. Cordier snaps and uses his power for evil, slowly but surely killing all those who had humiliated him throughout his career by his own hand and by manipulating others. Whether it’s out of revenge or the desire to cleanse his village of terrible human beings, you’ll agree that he’s not your ideal police officer.

In this film about two informants (a police informant and a mob informant), Colin Sullivan ends up on the corrupt side of the battle. Sullivan is trained by a mob boss to become a mole in the police department and is then tasked with finding the rat in the boss’ crew, an undercover cop in the mafia. Sullivan feeds information to the very guy he’s supposed to be working against as a cop, and ends up getting lots of police officers killed, as well as killing some himself. If you didn’t understand how corrupt he was throughout the whole movie, though, the obvious-metaphor rat in the very last scene should’ve given it away.

OK, you caught us. Warden Samuel Norton isn’t quite a police officer; he’s in charge of a prison in Maine. But he’s too corrupt and the movie’s too good to leave off of the list. Norton uses Andy Dufresne, a former banker and now prisoner, to launder kickbacks he’s receiving for taking advantage of the prisoners. To keep Dufresne from quitting the immoral practice, Norton has the guy killed that Dufresne was mentoring and who had information that could set Dufresne free. Of course, there are always repercussions for trusting a smart prisoner too much, and Norton finds that out the hard way.

When rookie cop Jake Hoyt rides with veteran police officer Alonzo Harris for a day, he probably didn’t expect to do drugs, shoot a former cop, and end up having Harris try to get a crowd to kill him. Just another day on the job, right? Harris is absolutely the last person you hope is working to protect you, since most of his time seems to be spent stealing drug money, letting gang members work out their own problems, and trying to get enough cash to pay off the Russian mob. A smarter corrupt cop would’ve known not to mess with the Russians to begin with.

With antics and one-liners that are more entertaining than disturbing, Captain Louis Renault is looking out for No. 1 during a time when it seems that’s the only way to survive. This classic World War II-era film encapsulates the corruption of the time, especially in places that acted as a sort of limbo between occupied Europe and America. Renault spent his time gambling (even when he used gambling as an excuse to close down a club), sucking up to important Nazi officials, and making women sleep with him in exchange for the papers to leave the country. And yet, strangely, you can’t help but like him.

If you haven’t seen this film, you should if only to see a bad-ass 12-year-old Natalie Portman. She plays Mathilda, a girl whose whole family has been murdered by corrupt DEA agents headed up by Norman “Stan” Stansfield. Mathilda’s father had been keeping cocaine for the agents, but they found out he’d been keeping some for himself, and Stansfield, who’s addicted to drugs himself, decided to take out the whole family. Mathilda was out shopping when the murders happened, so now Stansfield wants to find her and kill her. She’s not totally helpless since she finds a father figure in the hitman down the hall, but it’s still not very nice of this officer to be trying to gun down a little girl.

You may want to think of James Cromwell as the sweet farmer who gave a pig a chance in Babe, but he shows another side of himself in L.A. Confidential. He basically controls the organized crime in L.A., blackmails city officials to get his way, and murders (or has someone else murder) everyone that gets in the way of his quest for drugs and power. It’s hard to even keep track of all the people he kills during the movie and before it even starts. This may have just been the unedited Babe sequel, Babe: Pig in the City.