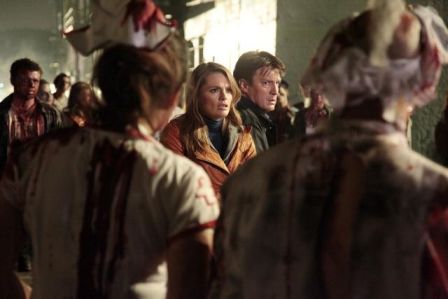 Zombies on the move in New York City can only mean one thing…fun, and lots of it. Yep, for the first time in a long time, Castle fans and viewers have been treated to two, yes, count ’em, two fun episodes in a row (you know things aren’t going well when an episode featuring zombies—the walking dead—is lighter than what’s normally served to the weekly viewing audience).

Last night, our crime-fighting duo (in this case, Zombie-fighting duo) were on the hunt for the “zombie” who killed David Lock, a rising Wall-Streeter. Of course, the writers delivered the usual number of red herring/suspects, and, of course, Beckett raked them over the coals for the standard 30 seconds before releasing them, as usual. Still, the case was lots of fun, and it was quirky, like the Castle cases from the days of old. Again, a fun and solid 40 minutes (+/-) of TV watching.

Before I get into the police and forensics aspects of this episode, let’s see what Melanie has to say. Hopefully, the zombies didn’t grab her during the night…

Okay, I’m having trouble concentrating on writing this blog after seeing the previews of next week’s season finale. I mean… the title for it is Always. Rick and Kate’s catch word. Need I say more? Squee!

But I digress… back to this week’s episode. Zombies, the “undead”, and murder… oh, my! A classic Castle episode, with laughs, drama, and moments that made me smile. I enjoyed this one, especially for the touching moments between Rick and Kate and Rick and Alexis.

The episode opens with Alexis breaking Rick’s heart by telling him their laser tag days are over. He looked so sad. His little girl has grown up and will soon leave for college. Still smarting from her rejection, Rick talks to Martha but doesn’t get much sympathy. She pretty much reams him out for treating Kate the way he has lately — and I don’t blame her. (Go Martha!)

Still hurt and acting like a kid who’s had his candy stolen, Rick decides to work one last case with Beckett, then say goodbye for good. Please note that he stopped calling her “Kate” a while back. All of that familiarity ended when he overheard her tell the kid in interrogation during the bombing case that she remembers everything from her shooting — and then he failed to confront her or question her or say anything at all about it. Instead, he turned passive aggressive and did his best to hurt her back by bringing a flight attendant to a crime scene, teaming up with a rogue gang task force detective, and just generally being an ass. Way to go, Castle.

Rick and Kate have always said more through subtext than any other way, and their interaction tonight was no different. While discussing a suspect, they hit on Kate’s shooting… and what she does or doesn’t remember about that day. “When a life altering moment occurs, people remember,” Rick says. And Kate comes back with, “Well, maybe it’s too big to deal with. Maybe he can’t face it just yet.” “Do you think he ever will be?” Rick asks, and Kate looks at him. “Hopefully. If he feels safe.” Yes, folks, they’re talking about much more than zombies.

The end of the episode brings this full circle, when again they speak via subtext and Rick learns Kate has been seeing a therapist in an effort to get better after her shooting, to help her deal with everything she does remember — including his desperate I love you. She also tells him the wall around her heart is coming down. “Well, I’d like to be there when it does,” he says, hope finally returning to his eyes. “Without the zombie makeup.”

So… Rick hasn’t worked his last case after all. Did we really think he had? No, of course not. And we have the awesomeness that is Always to look forward to next week. And Alexis hasn’t given up laser tag. After all, it’s a Castle family tradition. She also plans to go to school at Columbia rather than Stanford or Oxford… and she even makes Rick promise not to drop in on her. Yeah, right. Like he’s going to be able to stay away. So… times they are a-changing in Castleland, and I for one am thrilled.

This week we were once again treated to a medical examiner we could believe…M.E. Perlmutter. This guy plays the part well, and he delivers his opinions and findings in such a way that makes even the “not-quite-right” seems plausible. His lines last night weren’t loaded with unnecessary and unrealistic babble like what we normally see on this show.

The writers assigned Perlmutter just enough dialog to get a point across, and that’s all that’s needed. For example, when Perlmutter said to Castle and Beckett, “I’ll have answers after I cut him open.” See how easy that was. No crystal ball. No Ouija board. And no pin-stuck dolls.

The Perlmutter actor plays a great part. I wish we’d see more of him and a whole lot less of “the other one.” The M.E. from the last episode played the part quite well, too. Somebody should take the hint…

Again, like the other fun episodes, the criminal case took a back seat last night. However, there are a couple of  things I’d like to point out for the writers out there who read this blog.

– Besides the fact that these people never get search warrants, kicking in a door is not as easy as these guys make it seem. I’ve witnessed officers, really big officers, who’ve planted their size 13’s on doors that absolutely refused to budge. Sometimes, in fact, it can even be difficult to breach a door with a steel battering ram. And, you know, I’ve never worn heels, but I sort of imagine the task of kicking in a heavy wooden door is even more difficult while wearing the shoes Beckett had on last night (image below). 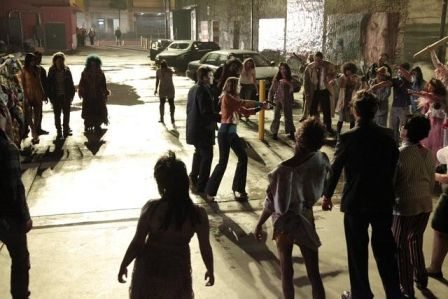 – Finding and identifying a chemical on the bottom a victim’s shoe was pretty remarkable, especially in the short amount of time that we saw last night. But to narrow that chemical down to only three locations in NYC was borderline absurd. Oh, and the right warehouse was one that had been abandoned for a long, long time… Hey, who wrote that stuff…Lanie?

– Beckett worries that this case could be what every cop dreads…the perfect murder. Well, there is no such thing as a perfect murder. In fact, do you remember the old tag line from this blog… “There are no perfect murders, merely imperfect investigations.” The clues and evidence are always there. It’s up to the investigators to find them. However, that’s not always an easy task. And that difficulty (lack of manpower, lack of training, lack of funding, lack of equipment, poorly-equipped or non-existent labs, etc.) makes some cases seem unsolvable. But that’s never the case.

I suppose I should address Scopolamine since its use on the killer was the reason Beckett gave for setting the murderer free without charges (I really don’t see that happening in real life, but stranger things have happened…OJ, Casey Anthony, and PeeWee Herman is back on TV).

Anyway, Scopolamine is a real drug that’s used to treat motion sickness, among other things. The drug is derived from the nightshade family of plants (jimson weed and Angel’s Trumpets (Datura or Brugmansia), and corkwood (Duboisia). If you live in the south you’ve probably seen jimson weed growing wild on the side of the road. And I recall seeing Angel’s Trumpet everywhere in California.

I’ve seen prison inmates who ingested jimson weed seeds to get high, and the results were never pretty. For example, one young man in a youthful offender center was found sitting on a toilet making motorcycle sounds (with his mouth, not as a result of the horrible prison food). He was hallucinating…vividly, thinking he was riding a Harley out on the open road. Then, well, who knows what he encountered during the hallucination because he went absolutely berserk, thrashing about, screaming, crying, and attempting to get away from an invisible demon while violently slamming his own very-real head into the concrete walls.

Scopolamine is made from that same family of hallucination-inducing plants. And people have been known to use the powder form as a date-rape type drug. It’s also been used to render unsuspecting victims to the point of being “out of it” for the purpose of robbing them.

The drug in raw form is a highly toxic poison and its use often results in death.

There are many rumors associated with Scopolamine, including the horror story of the people passing out Scopolamine (burundanga)-laced business cards. The tale, which, by the way, is currently making its way around the internet, describes the victims being rendered unconscious after touching the cards, at which time the crooks steal, rape, and rob to their heart’s content. This story is FALSE. I repeat, it is FALSE.

But that’s enough about the police stuff. The show was Castle 101 and the only thing missing was Michael Connelly and gang at the poker table.

Here are some of the great lines from last night.

– Perlmutter after seeing Castle cringe regarding autopsy details – “We’re all meat, Castle. Get over it.”

And the best line of the show…

– Castle while dialing 911 after the “dead” zombie bolted from the morgue – “Is there a police code for ‘zombie on the loose?'”

Well, there’s only one episode left this season, and after seeing the previews I fear we’re in store for another dark and heavy, “save-the-world-from-total-destruction type show. I hope not, because that sort of thing is simply not what makes this show work. We’ll see.