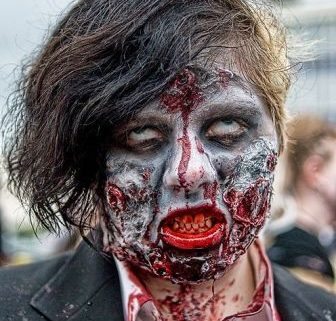 Thanks to video games, movies, TV, and some books, I’ve had to spend a fair amount of time over the past few years convincing my grandson that zombies aren’t real. My words, although not always totally satisfying, seemed to at least put the issue at bay…until the next TV show or video game featuring the living dead. Finally, as he got older, zombie fear died away (no pun intended).

Well, my grandson’s zombie alert system sounded the alarm again on May 26, 2012. It came without warning, too. No advance notice. And no chance to prepare. Besides, the little fellow is too young to possess explosives and machetes (for head-lopping). He doesn’t drive (everyone knows that running over a zombie will “kill” it). His mother won’t allow him to play with matches. And, at 10, he’s not quite strong enough to bludgeon the walking dead to its second death.

So, desperate to implement the ultimate protection against the latest wave of zombie attacks, my grandson’s first choice was to call me. Sure, good ‘ol grandpa would know what to do. And to show you just how smooth and all-knowing I am, here’s how the call went.

“Well, the man on the news just said there’s a naked man eating another man’s face.”

“He was probably kidding.”

Having not seen the daily news and expecting a punch line, I asked, “No, why?”

So, it was time to start the “no-such-thing-as-zombies” speech all over again. This time, however, I had a few major hurdles to overcome. Yes, a totally nude man (Rudy Eugene) had indeed chowed-down on another man’s face. And he’d growled like a starving beast when the officer approached. Hmm…

You know, it did take six shots to stop the feeding frenzy. Suddenly, I was beginning to wonder…had my grandson been right all along? Were zombies real after all?

Then, more zombie-esque stories began to pop up.

– Alexander Kinyua, a 21-year-old Morgan State University student, killed his roommate and then ate his heart and part of his brains.

– A Swedish medical university employee became suspicious that his wife was having an affair so he cut off her lips and ate them.

And then, to top it all off, Mao Sugiyama, a self-described “asexual” chef from Tokyo, had surgery to remove his genitals, and then cooked and served them to five PAYING dinner guests (refined zombies who prefer a piping hot meal that includes button mushrooms?).

Oh, we mustn’t forget the New Jersey man who, just last week, stabbed himself 50 times and threw bits of his own intestines and flesh at police.

Well, until the internet and cellphone cameras, the general public rarely saw the side of society that’s now and always has been fairly commonplace—murder and real-life macabre. Police officers, though, see those things as part of their everyday, run-of-the-mill, work day. People kill. They dismember. They bite of ears, fingers, toes, and even penises. And cops see it all, including cannibalism. That’s right, cannibalism is nothing new to humans (have you forgotten about Dahmer and Albert Fish?).

But growling at police officers while consuming the face of a still-living human being? Or restaurant patrons settling down to a plate of fresh chef parts?

Me? Well, I’ll pass on the lip linguine and the genital stir-fry. But you can bet your last dollar that I’m stocking up on matches and machetes. And my car is full of gas in case I need to make speed bumps out of a couple of brain-hungry, mindless “gotta’ eat flesh” zombies.

I think my grandson may have been right after all. So I’m now on high “Zombie Alert.” I’m watching everyone closely for that “telltale look.” Who knows, they could be anywhere…the bank teller, the guy in the hardware store, or the grocery store clerk.

I think I’ll make a nice sturdy hat to protect my brain.

Now where did I put that aluminum foil?