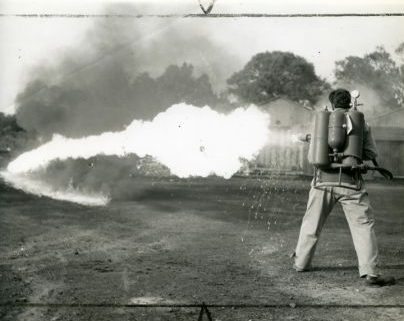 Using hairspray as a chemical deterrent to ward off attackers has been a hot topic lately. The general idea is to keep a can handy on the nightstand beside the bed, or a smaller can inside a handbag. Then, as an unsuspecting attacker approaches, the would-be victim sprays the hair-stiffener into the thug’s eyes, who is then supposed to immediately run away.

Personally, I do not recommend the use of hairspray as a means of defense against attackers. It’s not totally effective—you must hit the eyes (peppersprays can be effective without direct contact to the eyes), and carrying the stuff gives a person a false sense of security. Unless you practice/train with it, chances are that using it in real-life would be totally ineffective.

The other premise is for the victim to use a cigarette lighter to ignite the spray as it leaves the nozzle, turning the misty chemical into a homemade flamethrower. Now, what halfway intelligent crook would dare continue his advances when faced with a fire-spurting homeowner?

Well, the ideas are good…spray the attacker’s eyes which could render him incapable of continuing the assault, or, set his hair on fire causing him to run outside looking like a human 4th of July fireworks display. But, there are a few things to keep in mind.

1. For obvious reasons, remember to use the aerosol hairspray, not the pump type.

2. The actuators (push buttons) on aerosol cans are normally made of plastic and could melt when exposed to prolonged extreme heat/fire.

3. The flame generated using a hairspray can extends only as far as the distance reached by the spray, which is basically a couple of feet. Therefore, an attacker could simply wait at a safe distance—four feet, or so—while your weapon slowly burns up/extinguishes. Or, he could stand at a safe distance and roast a marshmallow or two while waiting for the flame to subside. Also, if the attacker is only two feet away when the victim begins the process of match-striking and spray-squirting, he could easily disarm the victim.

4. While standing in your bedroom, striking matches and flicking Bic’s, an attacker could easily grab the blanket from your bed, toss it over you and your flamethrower, and then beat you senseless.

Of course, you could always switch to deodorant as a source of power for your flamethrower/chemical deterrent. At least then the attacker would smell nice while he pounded out a rhythmic Latin beat on your head.

Oh, and there was the fight between two Michigan women where one grabbed a can of hairspray, aimed it at her opponent, and set the stream on fire. Well, the flame never reached the other woman, who grabbed a lamp and hit the fire-sprayer with it. When police arrived they found scratches on the faces of both women…and a broken lamp.

Of course, there’s a more deadly use for hairspray…

Way back when (sometime during the late 1980’s), Virginia coalminers decided to strike, becoming rowdy in the process, and when the state police moved in to restore order they were met by jack rocks in the roadways (jack rocks are large, sharpened metal objects shaped like jacks—kid toys—designed to flatten car tires), gunfire, and incoming spuds fired from potato cannons.

The VSP spent nearly $200,000 to replace flattened car tires during the period when over 400 troopers were assigned to the area on a rotating basis. The state police spent nearly $8 million keeping the peace during the nine month strike.

Anyway, back to Potato cannons. They’re simple devices, generally made from PVC pipe, a source of ignition, such as a barbecue grill spark-lighter, and an accelerate, such as hairspray. Users wedge a potato into the open end of the cannon, squirt hairspray into the area where the igniter is installed, close the cap, and then flick the igniter. The spark ignites the hairspray which then propels the potato. A simple, yet effective process.

During the time of the troubles with the miners, I just happened to be at the State Police Academy for in-service training and was lucky enough to be one of the cops chosen to test fire potato cannons. The idea was to see how much damage they could do and then relay our findings to the troopers assigned to the mountain areas where the strike was taking place. So, after firing a couple hundred pounds of spuds at various targets, we learned that the force generated is often great enough to send a spud through plywood, cinder blocks, and even the door of a passing trooper’s car. The cannons were surprisingly powerful.

Below is a video recorded by author and Florida law enforcement officer James O. Born. In the brief film, Jim demonstrates how to fire a potato cannon. His target is a bit…well, unconventional, but the action is real. You’ll notice a large cap on the rear end of the cannon. That’s where hairspray is applied. And, you’ll see Jim holding the ignition switch in his right hand.

Followon TwitterSubscribeto RSS Feed
Josh Moulin: How Your Computer Can Be a Threat to National Security