Once in a while I meet someone who really stands out in a crowd, and inventor Wayne Merry is one of those people. Wayne’s recent creation is a really unique and worthwhile project, so I asked him to share it with the readers of The Graveyard Shift.

It will likely come as a big surprise that the founder of the “Amber Alert Systems” has no children. The name “Wayne” means “builder” and as having started many diversified businesses, this one came from watching the show “Ocean Force” on TruTV and wanting to help people!

Born in Canada (adopted with his twin brother, Warren), he started working when he was 16 for A&P Food Stores. He began by mopping floors and gradually developed his marketing skills and sales experience. He later started a sewing factory for custom dolls and plush animals. This led to licensing with Trivial Pursuit, international travel, and importing from Hong Kong, Mainland China, and Taiwan. Then, came the big break. Wayne patented a packaging process for finished textiles which he licensed to the Newell Rubbermaid Corporation. If you see a “slippery when wet” yellow triangle with the Rubbermaid logo on it, in all probability, the wet mops were packaged using his patents. Those patents have resulted in business travel to more than nine countries, plus several prestigious awards.

Wayne’s natural entrepreneurial flair for business and blessing from God has brought us to this great idea to find lost children.
Because I Care!

One cold and dreary February day I found myself surfing…. that is channel surfing and thought I would cheer myself up by watching a True Channel marathon of “Beach Patrol”. Awwwww… warm beaches from all over the world, sun, sea, beautiful people and LOST CHILDREN?! And more Lost children and again and again. I not only was shocked by the reoccurring situating but just how tragic and fun for family and friends turned to PANIC and sorrow within minutes! I also noted the “old school way” of communicating to the beach goers that there was a 10-57 in process that could lead to a 311, 207 or the worst 10-54! 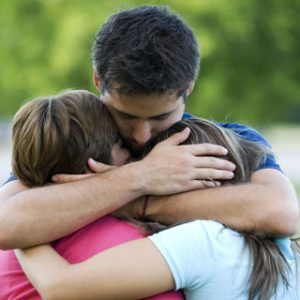 As the family member in an uncontrolled crying jag with a lot of panic was trying to give the details to the authorities TIME was the biggest enemy. Yes the lifeguards had 2 way radios for themselves but how could they convey this urgent 10-57 to thousands of beach goers enjoying THEIR day at the beach. Well there was loud speaker announcements that some heard and there was the lifeguards with their flag signals …. that many thought there was a shark sighting but no instant messaging.

And this is when I got the idea for my Amber Alert Kiosks combined with text messaging and mobilweb viewing. I could reach a lot of people in a geo-targeted area very fast and efficiently with actual pictures of the child. And just maybe a picture of that child within the last hour in their current clothes they were wearing scanned from the love one’s cell phone or camera. From watching the Beach Patrol show it was noted that most lost children are actually found by our neighbors at the beach! Yes we still have a few good people out there! The problem was they found the lost child but did not know how to tell anybody. As the municipalities close school and run out of funding the beaches have less and less staffing. Some beaches rely on local police departments which in turn spreads their time and effort even thinner. As a side note I noted that all lifeguards and most beach goers HAD CELLPHONES!

Well after researching the net I found that a 10-57 happens a lot and sometimes resulting in a death! I approached the Volusia County commissioner’s office in Daytona Beach Florida and they loved the idea! They want safer beaches and families to come back year after year.

As staying at the Hilton Towers in Daytona and wearing my new Beach Amber Alert “t” shirt, I was questioned by the hotel check in clerk, bartender and finally the manager about this alerting system. Not only was the beach patrol interested but also the hotels! Why? Well I come to find out that a lot of the hotels are beach front and actually responsible for the safety of their quests and families! In the words of the manager “You don’t understand, we can have a missing child on the beach, in the pool area, in the lobby, in the stairwells, in the parking lot, in the elevators, in a room” well he started to paint a bigger pictures and more so a more dangerous scenario.

Here are some statistics;
Over 2000 children get lost a day in the USA.
45% in a shopping environment 27% in an amusement park area.

There are nearly 1,000 kidnappings of children a day in the USA.

Almost 500 a day involve the concealment of a child, transporting out of state, or intent to keep the child permanently

If a child is taken unlawfully, they are usually harmed or killed with the FIRST 3 hours. TIME IS NOT ON ANYONE”S SIDE.

95% remember the situation all of their lives.

Mothers flee with children in 54% of the cases

Fathers flee with children in 46% of the cases

Most are blessed and returned to their love ones but for the 3% not returned it does not have a happy ending.

Knowing that shopping malls are a social living center by design and attraction to the younger people as well as predators, I decided to scope in on malls. So why is there a poor rate of success for the Justice and states Amber Alerting Systems? Here is what I found out.

Amber Alert vary by state, but this is the general criteria and requirements before an Alert will be issued:

1. The child must be under 18 years of age.
2. There must be a clear indication of an abduction.
3. The law enforcement agency’s investigation must conclude that the child’s life is in danger.
4. There must be a detailed description of child and/or abductor/vehicle to broadcast to the public.
5. The activation must be recommended by the law enforcement agency of jurisdiction.
6. The missing person must be missing for 24-48 hours! This is slowly changing but still the greatest enemy of the systems. TIME is not on any one’s side!

Therefore this is what I designed and patented in my kiosks:
1. When a child is lost, the parent or guardian alerts an employee or security personnel at the deploying venue and supplies as much pertinent information as possible and a photograph, if available.

2. The deployer logs into Amber Alert Systems’ Web-based content-management program to upload the child’s information in the form of a lost-child alert.

3. Sponsor advertisements running on the kiosks are interrupted to display the lost-child alert. Yes we sell advertising on the monitors to off-set the cost of the kiosks!

4. The information also is distributed via Amber Alert Systems’ SMS text-alert service, which visitors to the deploying location can subscribe to and unsubscribe from at any time.

5. Total lapsed time less than 10 minutes to blast the area.

I then approached CBL properties the owner of large malls in the USA. I met with the regional marketing manager and she had one question. “When can you do 87 of our malls”. I said one at a time.

On July 18th we installed our first kiosk at the Daytona Florida Mall with the press conference commencing Monday July 20th 2009. From the delivery on Friday night we were excitably met by the mall’s Security team On Sat we installed the unit early in the morning and I had to run interference for the installers as the shoppers warmly greeted the idea and extended their appreciation. A local police officer approached me on Sunday and wanted to speak with me for a moment. For a moment all of the bad things that I had done since childhood and the driving actions to the mall that day pasted my mind. He wanted to know if we could feed his police department and officers my Amber Alerts in real-time. He conveyed to me that this mall had “issues” in the past that warranted his prompt attention to avert further situations. Later on Monday it was also conveyed to me by several other local authorities that they were on board with my idea. Chief of Security said this will help us do our job faster!

One shopper approached me after the press conference and thanked me for this great idea and said she would look forward to all public areas having this great product and community service.

As I speak to the public more about my company everyone has a story of loosing a child at some time or being lost. I know I am on the right track.

The future!
We are exploring camera implantation in the kiosks. Face scanning for personal recognition. Finger print matching via our touch screen monitors and even potential Bio-metric retention of shoppers.

Now we have learned that the FCC with Home Land Security is requiring all public areas to have an Alerting system. We will be able to direct the public to safety in the event of severe weather, natural disaster and even a terrorist attach.

I get inquiries from all over the world for my systems… who knows, someday I will be able to take a day off … and go back to the beach.
Sincerely,