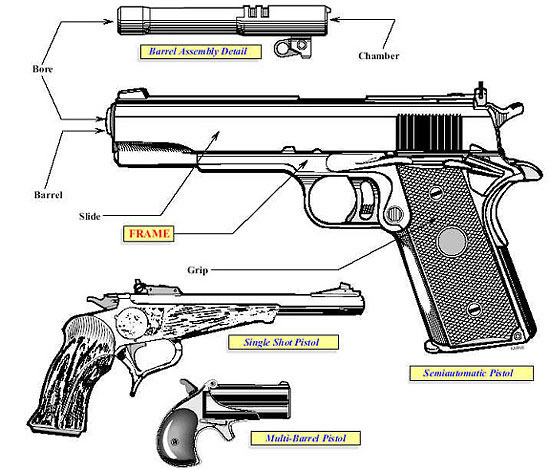 Have you ever really watched when someone is firing a semi-automatic pistol? What happens to the brass? How far is the brass ejected? What does the recoil do the wrists and arms? What does the slide look like when it kicks back

Here’s a slow motion video that will answer all those questions. Notice the movement of the flesh on the shooter’s right forearm.

Where’s the worst place to stand when someone’s firing a shotgun? In front of the barrel, right? Well, here’s what is looks like to be in that horrifying position.

* Notice the ejected shell. And, if you follow the shot (round pieces of lead similar to bullets) as they leave the barrel you’ll also see a round, white wadding. The wadding is inserted into the shotgun shell as a seal that prevents gas from passing through the shot, instead of propelling it forward.

– A semi-auto uses the force from its own recoil to eject old casings and to load a fresh round into the chamber?

– Shotguns are also referred to as scatter guns?

– Shotgun barrels are normally smooth bore, meaning there are no lands and grooves like those in handguns and rifles?

– Shotguns with barrels less than 18 inches long are considered “sawed-off” shotguns, and it’s illegal to possess one in the United States without special approval from the ATF?

Here’s an update on the Michael Phelps bong incident. Remember what I said in my earlier post about this? I said there wasn’t enough evidence to try Phelps for possession of marijuana – no blood test results, no confession, etc. Photographs alone are not sufficient evidence. Well, I’ll say this now –  I told you so! Nah, nah, nah, nah, nah…

(CNN) — Olympic swimming champion Michael Phelps will not face criminal charges in connection with a November party at which he was photographed using a bong, a South Carolina sheriff said Monday.

“We do not believe we have enough evidence to prosecute anyone who was at the party in Columbia, South Carolina,” Richland County Sheriff Leon Lott told reporters, adding that authorities are ending their investigation into Phelps.

“We had a photo, and we had him saying he was sorry for his inappropriate behavior,” Lott said. “That behavior could have been going to a party. … He never said, ‘I smoked marijuana.’ He never confessed to that. We didn’t have physical evidence. We didn’t have enough where we could go arrest him.”