Tulsa police officer Betty Shelby has been formally charged with manslaughter in the shooting of Terence Crutcher.

I rarely speak out about police shootings until ALL facts are in, and I don’t for good reason … because I, like the rest of the population, was not there, meaning I do not know any more than my neighbors, you, or anyone else who wasn’t at the scene. I also cannot begin to know what was going through the officers’ minds at the time the triggers were pulled.

Even when a shooting is captured on video we still don’t have all the facts, and we certainly do not know what the officers were experiencing. And people who have not been trained as police officers absolutely have no clue what police officer training entails. Not. A. Clue. So for those “not in the know” to say that police officers receive poor training is an irresponsible statement at best.

However, in the wake of the shooting of Terence Crutcher in Tulsa, today I have to somewhat/sort of agree with a portion of a comment posted to Twitter by Middleton, Ohio Police Chief Rodney Muterspaw.

As an officer I am so sick and drained of some cops doing things like this. You are making us all look bad. STOP.  #TerenceCruthcher

Here’s where the chief and I agree, and that’s in the sense that everyone needs to STOP … but to examine all facts before making decisions.

Crutcher, as you’ve probably seen by now, held his hands high in the air while walking away from officers, disobeying several commands to stop. The reason for the officers’ interaction with Crutcher has been described as “a vehicle broken down in the roadway.” Crutcher was the driver of the disabled SUV.

There’s no doubt that Crutcher was acting oddly and the vial of PCP found in his vehicle could certainly explain the behavior. But is odd behavior alone just cause to prompt the use of deadly force?

Let’s take a quick peek at what we know based on a few minutes of video from the scene, along with post-event statements made by officers who were actually on the scene.

Crutcher was first TASERED by one officer and then immediately shot by Officer Betty Shelby when, after walking slowly away from the officers, he reached the driver’s side/door of the SUV. Remember, this was not a criminal suspect, nor was Crutcher doing things like making threats, charging the officers, reaching to his waistband (a convenient spot to hide a firearm or other weapon). Nothing remotely close either of those things. He simply walked to his vehicle in disobedience to what the officer commanded him to do, which, by the way, she had just cause to do. She needed information about him, the driver of a car parked diagonally in the center of the roadway, crossing a portion of both lanes. This is not how a rational person parks a vehicle. Even if it had stalled, why stop in the center of the roadway, partially blocking all lanes?

Officer Shelby said she thought Crutcher reached inside the vehicle to get something and it was that particular action that caused her to fear for her life. At the same moment that Crutcher reached for the car door, window, or whatever it was he reached to do or for, one officer deployed a TASER. Officer Betty Shelby then fired her pistol, shooting Crutcher. He died. 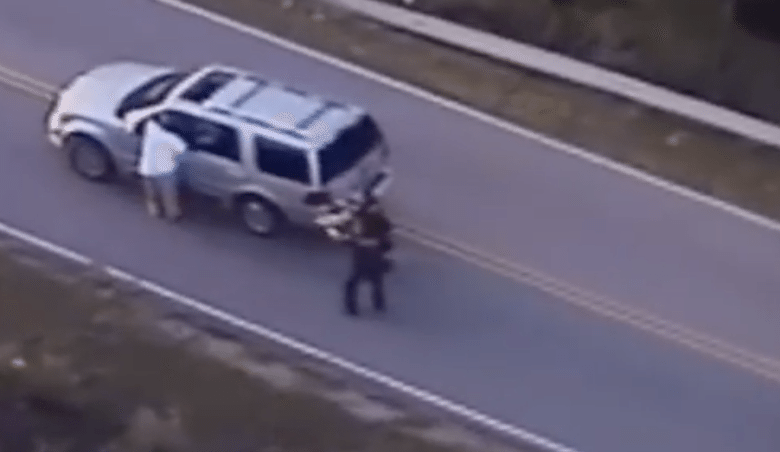 This is a perfect example of two officers perceiving a threat differently. Entirely different, actually. One officer, the one who used the TASER (a less than lethal weapon) apparently saw Crutcher as someone who was disobedient but needed to be detained by using a device designed to bring about compliance.

The second officer, Betty Shelby, thought deadly force was warranted. The difference between the two reactions is H.U.G.E. HUGE!

As a former police academy instructor who taught officer survival and defensive tactics, the two distinct differences in reactions is extremely troubling to me, and it’s confusing. What did she see that the others did not? Why was she concerned and fearful that Crutcher planned to severely injure or kill her or the other officers? Why did one officer believe all that was needed to quell the situation was the use of a non-lethal weapon, while a fellow officer believe she needed to stop a “threat” with the use of deadly force? This is totally a case of apples and oranges. Polar opposites that I believe could aid in the prosecution of Betty Shelby, someone who is most likely about to become a former police officer.

I have no doubt in my mind that the officers on the scene that day each received very similar, if not identical academy instruction. They each went through practical, hands-on training that includes role playing and firearms simulation training (those of you who’ve attended the Writers’ Police Academy have seen first hand what this training involves and how extremely realistic it can be).

Once the new recruits pass all tests and become certified police officers, they work under the direct supervision of field training officers for a lengthy period of time. Afterward, the officers go out on their own to perform their individual duties as police officers.

Officer Shelby was not a rookie by any means, and that includes my “5-year rule of thumb” guideline, the time it seems to take many officers to finally transition from rookie status.

So what happened that caused Shelby, a seasoned police officer, to pull the trigger? Could it have been the sound of a TASER deploying? They are a bit noisy and, if your nerves are already on edge due to all the recent cop shootings/ambushes, the sound could have been the catalyst, possibly? Did she actually believe that Crutcher was reaching for a gun, something she couldn’t have possibly seen because there was no gun found, yet a threat seemed very real to her.

I do know that it’s impossible for us or even the officers on the scene to know how Betty Shelby perceived the situation that unfolded so quickly. But I do wonder why she was the only officer out of four who fired her pistol. Actually, she fired her pistol, one officer deployed a TASER (pictured center below), another had his pistol in-hand and aimed at Crutcher, while the fourth officer had a hand on her/his gun belt and a radio mic in the other hand while standing in a hot/danger zone (dangerous if the suspect was a threat to life, and the latter—one hand on the belt and the other holding a microphone—is absolutely not a response you’d expect to see in a deadly force encounter).

The officer standing to the left in the image, the one speaking into her/his microphone, is the one that makes this entire incident seem so odd to me. Again, I wasn’t there so I have no way of knowing how either of the officers perceived the situation. But standing in the wide open spaces, unprotected from what appears to be a threat to the other officers, makes no sense, at least not to me. 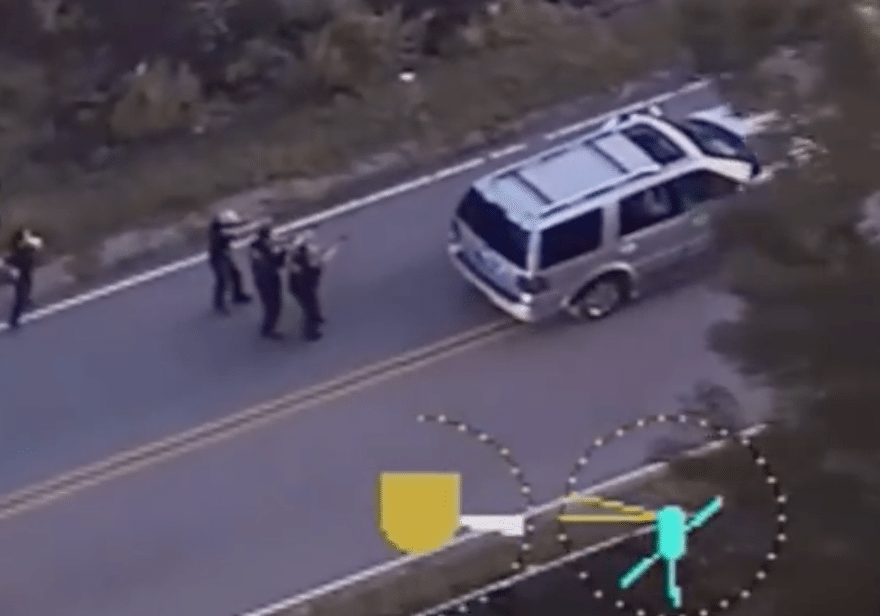 So four very different responses to the identical situation. Which was the right one and which was wrong, if either was wrong or right?

Perception is key. How did the Betty Shelby perceive the encounter? Did she fear for her life or the life of others? Or, did she respond to a sound (the TASER)? Did she shoot because of a “fear” living in her mind, the thoughts of recent officers killed in the line of duty?

If an officer fires her/his weapon because of a fear that’s frantically clawing at the inside of her/his skull, a fear that’s based on an incident not relevant to the one at hand, well, police work may not be proper line of work for that particular individual.

Sure, officers must be mindful of all potential threats, and they must use past experience as a guide as to what could happen “if,” but they absolutely must treat each individual incident as what it is at the precise moment it occurs.

Why Betty Shelby fired her weapon is a question each officer must think about right now … today. And, like Chief Muterspaw said, “Stop!” Because you’re not trained to shoot people when a situation clearly calls for other solutions.

And to the media who have no clue about what they’re pushing as “news” … you need to STOP as well. Spend a few days at police academy. Ride with cops for a few nights. The same goes for the armchair and Monday morning quarterbacks. STOP!

In fact, everyone needs to STOP. Take time to think before reacting with such hate, fear, and anger. Don’t let agendas shape your thoughts. Think for yourselves.

To my fellow officers who’re still out there on the streets. Remember and use the training you received at the academy. I know it’s tough and sometimes scary, but you do what you do because you love your jobs and you truly love people. If that’s not the case, then please do STOP right now and seek other employment.

Remember, if or when a suspect’s thumb and forefinger move inward toward the center of the body and the elbow moves outward, away from the body, then there’s a good chance they’re going for a weapon of some type.

Good point to consider when examining the shooting of Terence Crutcher. Where were his hands and what did Officer Shelby see, if anything, that her fellow officers did not? The answer to this question could either save or destroy Betty Shelby.

Either way, Terence Crutcher is dead, and I believe Betty Shelby will be acquitted … because perception is the key.

Followon TwitterSubscribeto RSS Feed
I, Too, Took a Knee … But for a Different Reason