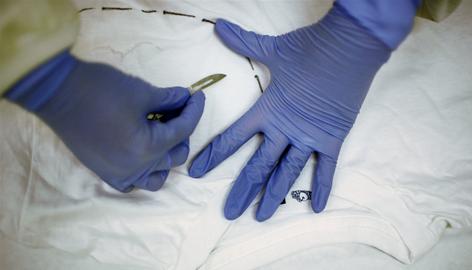 Touch DNA is not rocket science. In fact, it’s far from it. To obtain touch DNA, all that’s needed is a sample, even one that’s as small as a grain of sand, and a little patience. What sort of sample? Again, easy answer. Anything a suspect may have touched, such as a fork, food, a doorknob, a picture frame…a murder weapon. That’s right, no longer do detectives need to rely solely on that blood droplet or semen stain.

The human body sheds tons of skin cells each day, and that’s basically what investigators are hoping to find on the evidence. Even prisons are using touch DNA these days. They’re taking touch DNA from contraband found within the facilities and testing it. They’re doing this so they can charge the appropriate prisoners with possession of the illegal items. And, since nearly every prison inmate has a sample of his/her DNA on file, it’s a simple matter of learning who touched the object. No more, “Not me. It’s not mine.” Or, “Nope, I never touched that bag of cocaine.” Within 60 +/- days prison officials will know without a doubt if the prisoner was telling the truth. This procedure is especially useful for testing narcotics packaging and illegal cellphones, both of which are highly dangerous items in the prison culture.

The problem some people see with touch DNA (on the streets, not in prison, and I’ll explain why it’s different in prison in a second) is that police officials are able to collect the samples without a warrant. They can grab a used paper cup from the garbage. A cigarette butt from the gutter. Or, a discarded newspaper. Even a door handle at the mall, or a car door handle parked in that same mall. If it’s collected from a public place there’s no real expectation of privacy. However, some people say this is another example of police overstepping their bounds. But is it?

On the other hand, prison inmates have no expectation of privacy. Corrections officials can, and do, search an inmate’s property whenever and wherever they want to. Therefore, touch DNA is perfectly acceptable and legal in the prison world.

So, do you think police officers should be able to legally collect samples of your DNA from public places and then use it against you in a criminal case?

– By the way, it was touch DNA that cleared the Ramsey family of Jon Benet’s murder. Touch DNA excluded all family members, but indicated the profile of an unidentified male suspect.