Dr. Katherine Ramsland has published 35 books and over 900 articles, and is the chair of Social Sciences at DeSales University, where she teaches about forensic psychology, profiling, serial murder, and forensic science. Her latest books include The Devil’s Dozen: How Cutting-edge Forensics Took down 12 Notorious Serial Killers and The Real World of a Forensic Scientist, with and about Henry C. Lee. She describes what it was like to work with him.

In the Company of Dr. Henry Lee

First, I want to say that this experience proves a point I often make: you should always be prepared, because opportunity can arrive from unexpected places. A couple of years ago I’d been invited to an annual symposium sponsored by the Henry C. Lee Institute in Connecticut. I went up on Sunday night and a few others were there so Dr. Lee came to join us for dinner. I ended up sitting next to him. I’d met him several times before in other venues so he knew my background. In fact, he’d given me a blurb for Beating the Devil’s Game. He started to talk about writing and mentioned that he’d recently lost his co-writer for a book about his life and work that was now overdue. So, there I was, a writer (and biographer) with background in forensic investigation. I offered to step in, and voila! I was part of an awesome team: Lee and his former lab director Elaine Pagliaro.

Dr. Henry C. Lee is one the most knowledgeable international experts in contemporary crime scene investigation. As a former Commissioner for the Department of Public Safety, Chief Criminalist, and Director of the Connecticut State Police Forensic Science Laboratory in Meriden, CT, he has visited thousands of crime scenes and testified in numerous high-profile cases, notably his participation on the O. J. Simpson defense team. He’s also been a consultant on the reinvestigation of the Sacco-Vanzetti affair, the JonBenet Ramsey murder, the John F. Kennedy assassination, and the mystery surrounding Vincent Foster’s death. Available to over three thousand agencies worldwide, he has assisted law enforcement in thousands of cases.

The first step for us was to outline the book and decide who was doing what. The cases came directly from Lee and Pagliaro’s reports, and I was happy that Elaine intended to write the technical stuff. I was more interested in forensic history and case analysis, especially the notes from the infamous wood chipper case and the investigation of serial killer, Michael Ross, who’d created such havoc in Connecticut when he elected to move forward with his execution.

Lee and I outlined the contents and he looked for photos and charts while Elaine and I filled in content. One of my projects was to visit the Henry C. Lee Institute to observer their forensic science program. I do a hands-on investigation course, myself, with a crime scene set-up, but the Institute has a lot more resources. It was no surprise to see that they had an amazing scenario, with an entire apartment laid out for setting up crime scenes. Next to that was a lab for analyzing the evidence, as well as a classroom.

Lee had devised it after he realized how ineffective it was to teach a practical skill with lectures alone. “When we were training students,” he said, “we noticed that it was very difficult for them to get practical experience, so I got the idea to set up an institute that would accept cases from people who could not pay a consultant fee. We charged them only the cost and those cases allowed students to get working experience. It also helps the community.”

While Lee appears to be a Jack-of-all-trades where forensic science is concerned, he got his start as a police officer and investigator, and then became a biochemist. His forte is getting the overall picture. “The major area for me is putting the case together,” he told me, “how to reconstruct a crime. Laboratory tests are mostly mechanical; you follow the procedure, you get the result. But how you interpret that result becomes crucial. You have to fit it into the whole case scenario. Sometimes you find DNA and it doesn’t mean a thing. We had a case where the police collected a lot of cigarettes, so we found a lot of DNA on the butts, but how do we know anything about that cigarette butts that people just threw there? It’s a shotgun approach. You pick everything up and hope that one will match your suspect.”

Lee’s mission is to keep improving the quality of crime scene investigation. Among his efforts was to create a decision tree, with which investigators can diagram their reasoning process. “It’s like a living textbook,” Lee stated. “When you look at the history of criminal justice, not only in this country but in foreign countries as well, the problem is that in many cases the crime scene was not handled properly. We lost the window of opportunity and now the crime scene is gone. The physical evidence is was not collected or was collected but improperly. It got contaminated, or deteriorated, or distorted. All of those issues can be avoided. How we can improve that is threefold: through education, good textbooks, and practical experience. Many times, people investigate cases with a shotgun approach—hit and miss. The logic tree approach is the reverse. We have to look at a crime scene first and try to determine what’s the MO, what’s the pattern evidence, and then try to determine what happened, where it happened, how it happened, and when it happened. We have to determine the primary scene and secondary scene, and whether it’s an active scene or passive scene, or an organized scene or disorganized scene. Once you have all of those issues resolved, you develop a hypothesis.”

When I teach forensic science, I’m often surprised that police officers in the class erroneously believe that the scientific method involves forming a theory about what happened at a scene and finding evidence to support it. Lee has noticed this as well: “The problem with most police officers is that they think in real life, you develop theories, like Kojak or Columbo. But nobody has a theory. A theory is something that has to be proven to be correct. We start with a hypothesis, which is based on our experience and training. In other words, you come up with a logical explanation. So we try to teach the students how to develop logical thinking from a hypothesis. Then how you use witness statements and physical evidence to prove or disprove this hypothesis. After it’s been tested and proven, you have a viable theory.”

For gaining experience, the Institute offers courses to professionals from around the world on such things as blood spatter, cold case investigations, and gunshot reconstruction. “We go shoot up a car,” said Lee, “and then let them study the bullet holes in the glass and in the car body, and teach them to use the bullets and casings to determine the shooter’s position and the bullet trajectory. We videotape them and then show them the original videotape that shows how we shot the car. They then learn from that how they made mistakes.”

Lee emphasizes that crime scenes are unique: “It’s like a human face: very individual, all different, but all humans have hands, arms, and legs. So you can approach a crime scene with a general principle. As long as you follow that principle, you will not make basic mistakes. Then you learn the specifics. Each type of crime scene-a rape or homicide scene or contract killing—all those specifics mean we handle it as a special type of case. You develop this through years of experience because the more you see, the more you learn; the more mistakes you make, the less mistakes you make in the future. The best way to avoid mistakes is to learn how others made mistakes. Then you don’t make your own mistake.”

Dr. Lee once taught a class for me, offering advice to aspiring forensic scientists:
“I come to this country with only $50 in my pocket. I didn’t speak English. This country provided the opportunity for me to learn to grow. It’s the only country in the world where if you work hard, you can prove yourself. The forensic field is not lucrative. You cannot become wealthy. If you want to be challenged, it’s the right field. But you have to have a good science background. You also have to learn to use deductive and inductive logic. You need to have curiosity. You can’t have an 8-to-4 attitude. I never have a day where I go home at 4:00. You have to have that persistence. Then you need an attitude, that you do your best. Win, lose, draw, you don’t care. Don’t let public opinion pressure you. Don’t let the police pressure you. Don’t let anything pressure you to do something unethical. Then you can survive and become one of the best forensic scientists.”

I’m proud of the work we did to produce The Real World of a Forensic Scientists and I hope it’s useful to students and experienced professionals alike. 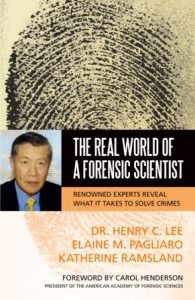 *This book is a favorite of The Graveyard Shift. I have a copy and it is fantastic. You can find a copy here.

Shake and Bake: The New Meth
Scroll to top